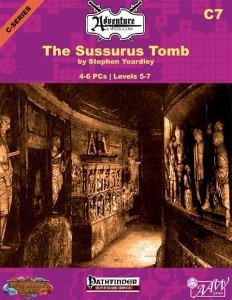 This is an adventure review. As such, the following contains SPOILERS. Potential players should jump to the conclusion.

All right, only GMs here? Players, you don’t want to SPOIL this one.

Near a place called “Koto” – “home” in the local dialect, lies a circle of stone and within, the place breathes a sense of the ancient and mystical. From the get-go, a non-lethal magical defense makes those faint of heart, will and resolve lose their way (or not fin the correct way – as represented by variant spells introduced) to get near eternally-blossoming trees that may confuse those unwary. And indeed – beyond a literal stair that requires its toll be paid in pain by those too weak, a magical statue tries to subdue characters not up for the challenge – via non-lethal means, mind you. But good rolls and stats do not suffice – instead, this module requires easy puzzle-solving from the get-go, with a concise and fun puzzle also being included here.

This complex array of magical effects, trap-like tricks and the puzzle conspire to evoke a sense of the truly wondrous and strange from the very start – indeed, the indirect atmosphere conveyed here, at the very entrance of the module, already surpasses pretty much 80% of classic dungeon-based modules – but does the dungeon maintain this sense of the wondrous? Well, what about a cool hazard – randomly determined gases with their very own, special consequences and irritating side-effects, for example? PCs will soon note that disturbing nature’s powers herein is a bad ideas…

There would also be a stationary, powerful magical lamp (non-l00table) that calms the undead and makes for an interesting reason for why dangers and the like contained within a dungeon have not escaped. On another note – the lamp’s unique effect would also make for an interesting representation of the soothing safe-zones of bonfires, should you ever wish to duplicate the fire/dark-symbolism of the Dark Souls-games.

Being infected with odd bacteria or spores (again, with a mini-table!) presents a further potential for consternation – oh, and a grappling tree root ball is not only dangerous – it also can make for a nasty surprise indeed. All of these safety-mechanisms, as it turns out, are not in vain – while they retain their presence in the lower levels, there also are undead that serve as a constant reminder why such mechanisms make sense – but the gains make this worth it: Take one of the most intriguing artifacts I’ve seen in a while: The saint of a long-forgotten goddess lies interred herein, the bones coated by black sapphire, an emission of soul bind allowing for an extremely powerful means of dealing with dread foes – and indeed, this artifact alone made me immediately come up with a significant array of utterly unique, cool storylines based on using the bones. Indeed, I have ideas for A WHOLE CAMPAIGN based on these bones…Oh, and GMs fearing for WBL-issues with powerful treasures – don’t fret. The powerful items herein will not be sold by the PCs…and their introduction does not break anyone’s carefully maintained balance.

Yes, this module is evocative. Yes, this was an understatement. And that was before yet another unique artifact – though this one is a particularly nasty, cursed one – and e.g. a great way to explain a legendary hero shirking his duties. The leitmotifs or roots (signifying past and decay) and undeath’s futility work as a red thread that suffuses the exploration of this dungeon and indeed, hidden below lies great evil and remnants of guardians that have failed, a powerful weapon of malignant intent…and downright awesome, bonkers giant zombie wasps. Oh, and it should be noticed that this pdf REWARDS players that *think* about the themes of this place – indeed, there is a kind of hidden bonus puzzle and connections to be drawn here – but no, I am not going to spoil them.

Editing and formatting are very good, I noticed no glaring glitches. Layout adheres to AAW Games’ two-column full-color standard and the pdf comes fully bookmarked for your convenience, with multiple nice full-color artworks. While I’ve seen some before, others I haven’t. The maps, this time provided in cooperation with Lord ZseZse Works are GORGEOUS – player-friendly versions, with and without grid, are provided – no less than 7 pages, in fact – neato!

At this point, I have high expectations whenever I see AAW Games’ Stephen Yeardley’s name on a given module – and the Sussurus Tomb is a pretty great example why. You see, it’s not that difficult to tell a good story. What’s difficult is to evoke a sense of narrative cohesion via indirect story-telling – letting the mind fill out the blanks, showing not telling, is particularly difficult in a game that wholly relies on…well, telling what you see hear, smell, etc. However, the best modules, especially among the old-school ones, REQUIRE a mastery in this discipline. It’s what makes the Souls-video-games so extremely compelling to me (as does the difficulty) and its what draws me in when reading great modules. This type of story-telling is difficult and a scarce few people manage to get it done, mainly because even small inconsistencies can screw you big time. Frog God Games would be one of the few publishers who manage this often.

Well, what if I told you that this module not only superbly excels at this type of adventuring, but that it ALSO provided numerous, smart puzzles and unique combat challenges? You would be right in assuming that I love this module – it is quite frankly, even among Stephen Yeardley’s canon, one of his most compelling works, managing to provide a sense of cohesion that makes me truly wish this was part of a series with the themes herein – a saga of a world that has moved on, where a few remaining flecks of civilization lie between vast swaths of mystical remnants of an age long gone by, a sense of ancient glories and terrors suffusing everything. This module is superb and well worth 5 stars + my seal of approval – if you’re looking for a thematically-concise, intriguing dungeon-crawl or just want inspiration regarding the leitmotifs I mentioned, then go get this – it practically demands to be inserted into one’s campaign and sports potential for further adventuring galore!

You can get this absolutely awesome module here on OBS!