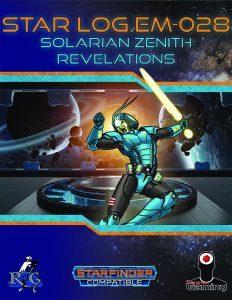 After a brief introduction, we take a look at the new zenith revelations featured within; as such, these all require being fully attuned. This pdf contains 4 new photon revelations:

-Inner Fire: Nets all allies within 30 ft. that you have line of effect to grant allies +2 to damage, and the ability renders half damage inflicted fire damage, as if affected by the flaming fusion. Additionally, the solarian may leave photon mode as a move action and increase the damage boost bestowed to +1d6+1 for Charisma modifier rounds.

-Lunar Shift: As a move action, choose a creature in close range and choose one of the 4 core energy types (sonic is excluded). You reduce the resistance to that energy type by 5, minimum 0, for class level rounds. Creatures without resistance instead gain vulnerability (ouch), but this is balanced by having duration only be 1 round. 14th level adds a second energy type, or you can reduce one energy resistance by 10. At 17th level, two may be reduced by 10, or one by 15, but you can only ever bestow one vulnerability. Really cool!

-Umbral Aura: As a move action, gain a gaze attack with a 10 ft.-range that blinds target until the start of your next turn, dazzled on a successful save instead. Duration increases at 13th level, and 17th level excludes allies from the effect.

-Collapse Point: Create a gravity point within line of sight and medium range; creatures within 10 ft. must succeed a Reflex save or be entangled and pulled towards the point, moving in initiative order from highest to lowest. They also take 2d8 + Cha mod bludgeoning damage, which increases by +1d8 for every 3 solarian levels beyond 9th. 17th level lets you either increase the radius or exclude a limited number of creatures. This effect lasts until the start of the next turn and the solarian’s immune to the effect. Neat one!

-Gravity Barrier: 10 ft. spherical barrier centered on solarian that lasts for Cha-mod rounds. This barrier pushes creatures away if they fail a Fort-save. Successfully saving mitigates the forced movement to an AC bonus that doesn’t stack with cover and 17th level increases radius.

-Gravity Wave: As a standard action, generate a 30-foot conical wave that pushes or knocks prone targets on a failed Fort-save. Distance of this push increases by 10 ft. for every 3 solarian class levels beyond 9th. Hitting a solid object that prevents movement nets 2d6 kinetic damage per 10 ft. the creature would have been pushed before knocking the target prone. What’s that, you ask? The GM chooses the correct damage type from the physical ones, depending on the object the target is shoved into! Elegant solution for this rules-language conundrum!

-Quantum Release: By spending 1 Resolve Point or leaving graviton mode, you may take an additional move action. Thankfully, no more often than once per round. The ability takes no action on your turn, and is a reaction otherwise – and, important, it may only be used once per round. Since the skittermander’s hyper ability exists, this should be pretty safe as far as future-proofing is concerned, but combo-ing skittermander tricks with this can be potentially pretty brutal.

This is not how the pdf ends, though: Instead, we get detailed notes on the most famous solarians in the Xa-Osoro system: There would be Collapse, anti-capitalist assassin of oligarchs, the samsaran teacher contemplator Valshavan, who notoriously hates the press, a kyubi paragon kitsune solarian, and more – pretty cool NPC background stories/concepts!

Editing and formatting re top-notch, I noticed no serious hiccups in either the formal or rules-language criteria. Layout adheres to the 2-column full-color standard of the series with a white background, and the full-color artwork is nice. The pdf has no bookmarks, but needs none at this length.

Luis Loza delivers an impressive, fun little supplement that delivers some rewarding tools for solarians to use, often tackling complex concepts, and executing them rather well. My final verdict will clock in at 5 stars – definitely recommended for fans of the solarian class!!

You can get these neat solarian options here on OBS!