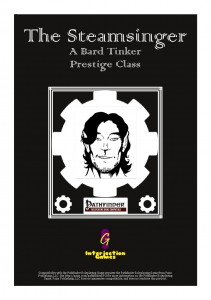 Mechanically, steamsingers get 3/4 BAB-progression, medium save-progression for ref- and will-saves and +1 existing level Inventions and Performances, but NOT spellcasting. Furthermore, only the type of action by which performance becomes faster and inspire greatness and competence are enhanced by steamsinger levels –  as written, no new performances become available and archetypes/build not utilizing one or either of the two suffer hence a bit – which I’m not sure was intended. If so, I do think that the PrC wouldn’t have broken balance by full performance-progression.

Now steamsingers get access to an array of exclusive, music-themed inventions to inscribe on their automata, but more on that later –  a total of 11 breakthroughs become available at 1st level and every two levels after that and they are interesting in that they allow for the musical buffing of automatons as well as allies. Mechanically interesting would also be the “Encore”, which nets a percentile chance of twice the perform ranks that automatons destroyed by anything apart from kamikaze result in the steamsinger regaining a use of deploy automaton.

When author Bradley Crouch works best is probably when creating synergies within his own craft and key vibrations is one such excellent example – while getting sonic resistance might be nice, actually making self-destruction sonic damage (for potentially more damage) and thus interacting nicely with other inventions by adding new options is neat to see indeed. On-the-fly modification of an automaton to exchange an invention for the improved version (“Requires and replaces” being the key-words) for the duration of the performance would also be possible – progress marches on, indeed! Thunderous blast is also rather interesting – allowing for a touch attack, the ranged sonic attack also acts as a directive for specific automatons to attack the target.

Now, I’ve mentioned inventions – and boy, they are HILARIOUS at times – no, seriously, I actually chuckled when first reading this supplement! Take the cello: Its baseline can be used to prevent the expenditure of other abilities – but once all daily uses are done, the automaton snaps it and proceeds to jump up and down on it, wasting a full round action. Very limited aura sonic damage via cymbals, making perform (dance) instead of bluff to feint, adding pyrotechnics (not the spell!) to instruments or creating brilliant flashes of light via puddleflutes – the options are quite varied and cool. And then, there is the one-man Band invention – automatons may use up to 3 instruments in a single full-round action – but only as long as the automaton is the only one deployed by the tinker. EDIT: I failed to get the fact that alphas are exempt – i.e. as long as only the alpha is deployed, it works. mea culpa!

Have I mentioned that tubas, by default, are used by automatons as bludgeoning weapons, increasing their slam damage? Or the fact that, following in line of myriads of information scientist-jokes, snare drums are reinterpreted as thrown weapons to ensare those hit by them? The imagery is glorious…

Editing and formatting are good – while I did notice a wording here and there that could have been a tad bit more precise, I encountered no glitches. Layout adheres to Interjection Games’ 2-column b/w-standard with thematically fitting stock art and the pdf comes sans bookmarks, but needs none at this length.

Let me get this out of the way: I LOVE the steamsinger’s concept and execution to death – I really, really do – not only from a purely mechanical standpoint, but also from the one of this supplement actually being an enjoyable read. This class, to me, is more of a theurge than the Mechromancer in that it blends two classes while adding some cool new exclusive toys to play with. That being said, I’m not wholly comfortable with the very restrictive bardic performance-progression and there are some wordings here that could have been a tad clearer. Still, the PrC per se is absolutely awesome and thus, I’ll settle for one a final verdict of 4.5 stars, rounded down to 4 – and still will slap my seal of approval on it: The concept is simply too cool not to.

You can get this cool PrC here on OBS and here on d20pfsrd.com’s shop!