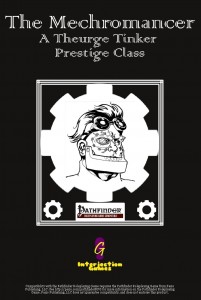 This PRC for Interjection Games‘ awesome Tinker-class is 5 pages long, 1 page front cover,1 page SRD, ½ a blank pages, leaving us with  ~2.5 pages of content, so let’s take a look, shall we?

Mechanically, the Mechromancer is a 5-level PrC that has a slow BAB-progression, gets d6, needs to be not of a good alignment and gets good will-saves. As to be expected from a class offering a theurge-approach, it offers +1 level of spellcasting and +1 level invention-usage per level, meaning mechromancer-levels stack with tinker-levels for the purposes of determining maximum number of available build points per blueprint, max amount of blueprints, inventions known and maximum invention level known as well as effective level of inventions and automatic HD-progression. I’d also comment on the amount of skill points per level, but unfortunately, the pdf lacks this crucial information. – Especially relevant since the PrC only offers two class-skills – this might have been intended as a means of balancing the class, but I can’t ascertain that.

Now fluff-wise, the Mechromancer is a blending of necromancer and tinker – i.e. of the two classes offering the most minions. Prerequisite-wise, this is reflected in needing to be able to cast animate dead as well as having an alpha. Now the first ability already had me chuckle “Blue Screen of Undeath” allows you to resurrect an automaton that has died within 1 minute mechromancer class levels times per day. Said revived construct only persists for a limited duration and counts as undead for the purpose of what affects it without gaining the undead traits. The reanimated automaton also can be directed sans using actions. Unfortunately, the ability fails to specify whether said reanimated automatons count towards the maximum amount of automatons a tinker can have deployed at a given time.

At 2nd level, the mechromancer learns to add one single mechormantic graft to each of his/her blueprints, including the alpha, which, at 4th level, gets a second graft. A total of 15 such grafts are provided and they range from a stomach that allows an automaton to heal 10 HP when digesting food for an hour to +3 natural armor via the addition of a skeleton, +5 to perception, an increased reach (only for combat maneuvers by 5 ft.) or the option to be healed by negative energy – but harmed by positive energy. There also is a graft that replaces the damage dealt by the kamikaze invention by negative energy – including a minor typo that speaks of “Customkaze”, but oh well. More significant are other glitches: Take adding a mechromantic brain-graft: It allows for the addition of a brain to an automaton – at the cost of counting as two deployed automatons. The automaton does deactivate when leaving the tinker’s master’s presence radius, though, paying thus for being autonomous. However, this does entail some peculiarities, as does the existence of reanimated constructs: Do these automata (either normal undead or those with a brain) get the awareness to make AoOs? What about combat maneuvers? Can automata with a brain be revived temporarily via Blue Screen of Undeath? The text mentions “irrevocable shutdown”, which makes me not so sure.

Another issue would be that adding a lymph system adds channel resistance +3 as well as +3 to fort-saves for the automaton – per se nice. However, channel energy usually deals damage to the living or undead – not constructs. It requires the variant channeling provided by the Forge portfolio to heal constructs via channel energy and damaging them via the channeling of an opposing energy is impossible until the mechromancer reanimated the automaton – prior to that, constructs are neither harmed, nor healed by positive or negative energy since they are neither living, nor undead. – i.e. channel resistance only applies once the automaton has been revived – prior to that, the ability implies that automata can be hit by negative or positive energy, which they RAW can’t.

Mechromancers may also add a secondary bite attack to their arsenal, I assume at the standard 1d4 for small creatures, but actually listing the damage said attack deals would have been helpful.

The Mechromancer’s Alpha also starts to radiate a permanent aura s per the desecrate spell and later adds the channel resistance provides by unhallow to its array, but not the other abilities of aforementioned spell.

Editing and formatting are not up to the level of quality I’ve come to expect from Interjection Games – from the missing skill points per level to non-italicized spells and minor typos, for such a short pdf the amount of glitches is too high for my tastes. Layout adheres to Interjection Games’ neat 2-column b/w-standard and the product does feature some nice b/w-stock artworks. The pdf has no bookmarks, but needs none at this length.

I really wanted to like the mechromancer- it really caters to my sentiments and has a delightful mad science-feel in concept. In execution, though, I think it unfortunately falls rather flat: From the missing skills per level to the uninspired capstone, the PrC feels a bit raw and less imaginative than its concept deserves – while the necromantic additions to the automata are great, as is the option to temporarily revive them, they do suffer from some problematic uses of the rules-language and over all require more clarification regarding when/if they count as undead, constructs etc.. And they only cover one half of the equation: “Theurge” implies a duality and this pdf misses the awesome chance of adding inventions to the undead – the class essentially is a one-way street, only one side of the coin, and feels honestly cut down, like it was supposed to be so much more. Were it only for unrealized potential, I wouldn’t have rated this pdf down as much – but with the glitches that actually severely impede the functionality of the class, I am left with no choice in spite of liking the concept of this PrC: My final verdict will clock in at a final verdict of 1.5 stars, rounded up to 2 for the purpose of this platform.

If you want to take a look at the Mechromancer, you can get the PrC here on OBS and here on d20pfsrd.com’s shop.