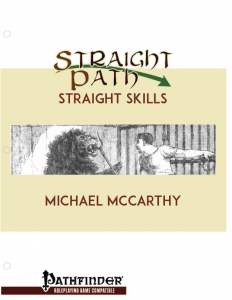 This alternative take on skills clocks in at 7 pages, 1 page front cover, 1 page editorial/ToC/introduction, 1 page SRD, 1 page back cover, leaving us with 3 pages of content. There is an alternate version included, which has been laid-out in landscape standard, optimized for e-readers. As such, it clocks in at 14 pages, but is otherwise content-wise identical to the letter-version.

Okay, so the skill system assumes a 3-pronged skill category system: A skill can be either broad, general or specific. A broad skill can include noticing things, recognizing creatures etc. General skills can include e.g. recognizing undead or spotting. A character skilled in a general skill “grants a +2 bonus” on related skill checks – that should be “gains,” otherwise it implies an aid another scenario. Specific skills include e.g. searching for traps and yield a +4 bonus instead.

A character is skilled in skill ranks gained by class (NOT + Int-mod!) plus Spotting, Searching and Listening. They also are capable in 4 things. Gaining a level in a new class that has more skill points than the original class nets +1 thing to be skilled in, +1 to be capable in. This is weird: Stepping from martial classes up to skilled ones is thus more efficient, skill-wise, than vice versa. When stepping “down” to a class with less skills and gaining a level in it, you demote a skilled skill to capable or lose one skill they had been capable in. Clerics and Wizards get additional skills, but oddly none of the other classes do. Only the core classes are codified thus.

Retraining a skill takes 3 days of downtime and 50 gp per character level. Half as much costs for being capable. There is an alternate suggested for skill points, but which retains the skill categories introduced here. In this scenario, general skills net +2, specific ones +5. Complaint here: There’s a “See page XX” reference here that should just point to the next page.

The final page is devoted to a massive list of sample skills, with broad, general and specific skills listed.

Conclusion:
Editing and formatting are good on a formal and rules-language level. Layout adheres to a no-frills two-column standard and the pdf comes sans bookmarks, but needs none at this length. The pdf has no interior artworks.

Michael McCarthy’s alternate skill system is per se interesting; it does not, however, represent a simplification. It divorces skills from attributes, which may be something you enjoy or dislike. That being said, it actually allows for a more defined gradience between different uses of a general notion of a skill. The system makes intimidating creatures in combat, getting folks to tell you things and getting folks to give you things three different specific skills. Whether that makes sense to you or not depends on your personal tastes. Personally, I like the more detail-oriented notion here, if not the classification employed. I similarly don’t get how asking questions and court etiquette necessarily are different things – when I try to ask discreet questions in court, which skill do I use?

I can also make a case for the pdf being not complete. How does the system interact with class abilities that net a bonus to the skill? What about magic items? We get the very barebones basic system here, which was to be expected, considering the low asking price. It is my contention, though, that the straight skill system presented here would have benefited from a) more details and b) clarified interactions with rules-components that are not replaced; considering that ability score modifiers are taken out of skills, the emphasis of skill-boosting items may well further increase (not a fan). How do skill-contests work? Feinting? Intimidation? Feats? In short, this is a promising, alternate skill system, but it is simply not finished. Using it on its own will require copious amounts of GM-calls. And I don’t really see the value here. The system doesn’t make things easier per se. It makes the skills behave in a more unified manner, yes, but to properly capitalize on the idea, we’d need more information regarding the more intricate details.

Still, the notion underlying this pdf has some value and I can see this appealing to some groups. Hence, my final verdict will clock in at 2.5 stars, rounded up due to the low price point.

You can get this inexpensive pdf here on OBS.