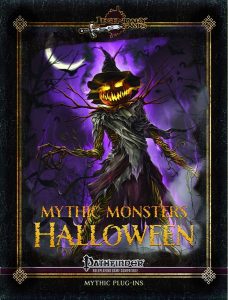 The supplemental material of this installment has a really cool array of two mythic feats, one of which can be used to basically become a faux-headless horseman (AMAZING), while the other, aptly-named Ghost Rider, lets you replace your missing head with a grisly image…like, say a burning skull…oh, and you can become transparent and the like. Amazing, really cool high-concept feats there…and they may also be used by certain mythic paths as path abilities. Beyond these, we also get 4 complex mythic items, the first of which would be ghostly gossamer that makes the wearer look translucent…oh, and its duration can be shortened in favor of generating miss chances and a chill touch…and, suffice to say, mythic power upgrades included. The goblin mask reduces person the wearer and makes him seem less threatening, enhancing Bluffing and Steal CMB, while also making it less likely to be targeted…and its activation-duration may be decreased in favor of a more horrific form with alternate benefits. Really cool! The sack of gluttony employs beguiling gift and illusory sweets that make the target succumb to the desire to consume these “sweets”, while mythic users can duplicate allfoods and make the effect harder to resist via surge die interaction. Cool! Coolest, though – the witch’s broom – a legendary item version of the broom of flying, enhancing the witch’s spells and hexes, her bond with her familiar and, at higher tiers, we get some seriously cool aerial agility there: Don’t let the witches atop their brooms! Really cool items this time around!

All right, I know – you’re here for the monsters, right? Well, let’s dive in! We begin with the Cr 5/MR 2 attic whisperer – and we’re in for something cool right off the start: These critters gain an aura that resonates with the abandonment theme, negating morale bonuses and they can also negate flanking and the like…oh, and when encountered within dusty environments full of debris, they start healing, as they incorporate the debris in their forms. Amazing! If you’re a self-respecting vampire you probably never want to leave home without a trusty mythic bat swarm: These critters, at CR 3/MR 1 can extinguish light sources and block the nasty sun! Yeah, damn cool. While we’re at the topic of low-level threats: The mythic beheaded (CR 1/MR 1) can use mythic power to split into two, draw sustenance from fear and may render targets fatigued. At the same CR/MR, the crawling claw’s mythic upgrade can instill panic, is better at grappling and may be sent for a specific quarry, adding some seriously nice, flavorful abilities to the evocative classic.

At CR 6/MR 2, the giant version of a crawling hand receives the option to constrict targets and a similar quarry-style ability…oh, and you don’t want to be hit by the pus seeping from its wounds. Did I mention tomb rot? Ever since #3 of the PFRPG installments (unless I am sorely mistaken), I have enjoyed the deathweb – it’s just a great concept. The mythic iteration, at CR 7/MR 3 is a beauty to behold: It gets basically “modes”, wherein the infestation aura may be suppressed in favor of defense…oh, and they may shed parts of their exoskleton, are much harder to destroy, courtesy of rapid repair, and their nets can spawn swarms! Their towering stature also makes them faster and thus harder to evade. A true gem of a build!

Supplemented by the feat Self-Repairing Construct, reproduced here for your convenience, the CR 5/MR 2 carrion golem inflicts attribute damage with its horrid attacks and may employ mythic power to tear off limbs…and the onset of their plagues is immediate…ouch.

At CR 8/MR 3, the hangman tree may use creatures grappled to enhance its defenses and worse, the cratures trapped may be used to fascinate foes and draw them in…and these dread predators also are better at camouflage than their mundane brethren. Once again, a feat, this time Inescapable Grasp, supplements the critter. Speaking of feats from the big mythic books by LG – Feel Footfall is one of the talents the mythic jack-o’-lantern, at CR 2/MR 1, can pull off some nasty tricks: Beyond generating fear, they actually heal within the presence of the frightened and, when killed, can plant a psychic seed that plagues foes after its demise…and from which it may respawn. Two thumbs up!!

At CR 1/MR 1, the gourd leshy can spawn a phantom pumpkin that duplicates zone of truth and that may fascinate foes…oh, and they may take their seeds and make them curative treats, which is pretty damn cool! All in all, an excellent example of what you can do with low-CR mythic creature design. On the high end of the scale, the CR 17/MR 7 nightwing can use mythic power to add three saves to crits, escalating the threat and gaining various benefits of its magic-draining. Worse: They are not that impressed by bight light either, may attack with their wings, benefit from Mythic Snatch and is particularly adept at wrecking items…

The CR 10/MR 4 shadow collector uses Mythic Quick Steal in its build and may use its shadow points and mythic power to create vortices of darkness, put stolen shadows in an extradimensional sheathe and employ them as a variant of spiritual ally for an overall rather compelling and nice upgrade of the base creature. The soulbound doll, at CR 3/MR 1, gains creepy abilities to mimic and project sound, which may even be used for a quasi-performance and it gains an improved version of Hide in Plain Sight that also uses teleportation over short ranges…yeah, creepy!

We close the pdf not with one, but two versions of a central trope of the game – the torch-wielding mob, once as CR 4/MR 1 and once at CR 13/MR 5 – and both get completely different ability-arrays, from incendiaries to seizing foes and burning them to smithereens, the base version is already cool; the fanatic iteration, however, is cooler still: Its hatred can take the forms of SPs, they can gain dual initiative when subject to mind-affecting effects and oh boy, you don’t want to end on the business-end of those pitchforks…

Editing and formatting are very good, I noticed no significant problems. Layout adheres to Legendary Games’ two-column full-color standard and the artworks included are amazing. The pdf comes fully bookmarked for your convenience. Kudos!

Jason Nelson and Steven T. Helt of the four horsemen joined forces for this supplement and the two designers complement each other really well regarding design aesthetics and narrative voice. We have some glorious supplemental material and A LOT of those really hard to design low VR/MR mythic foes. Why “hard to design”? Well, you want to go mythic, obviously, but at the same time, you need to capture the essence of the respective critters in a pretty simple manner…and this pdf does just that. Particularly Ravenloft games, low-level horror-scenarios and the like will greatly benefit from this file, as its builds make the critters work better as story-monsters, emphasize their unique natures and reward clever players. In short: This is an excellent installment of the impressive series, well worth a final verdict of 5 stars + seal of approval.

You can get these amazing mythic monsters here on OBS!
Endzeitgeist out.