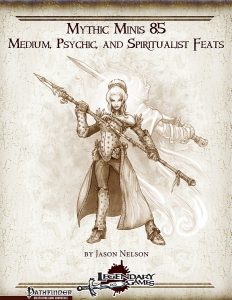 -Disciplinary Devotee: Increase feat bonus to +2; expend mythic power to increase the bonus by 1/3 tier and “increase the save DC for spells you cast from your discipline for 1 minute.” – By how much? The additional amount (i.e. 1/3rd mythic tier)? This one’s wording could be slightly more precise.

-Emotional Conduit: Spells gained by the feat take effect at +1 CL and increase their save DC by 1. Beneficial spells cast on the phantom are extended and the spells gained can be cast as mythic spells.

-Focused Phantom: Increase concentration bonus granted by the phantom by +1/2 mythic tier. When adjacent to the phantom and failing a concentration check, you may reroll for the cost of expending mythic power, adding + surge die as a bonus. After such a reroll, the phantom merges with your consciousness, though.

-Phantom Fortification: +5% per mythic tier chance of ignoring crits and precision damage in ectoplasmic form; if the phantom is adjacent to you, you may expend mythic power to decrease a critical hit versus the phantom down to a regular hit.

-Shared Soul: Bonus increases to +4 and you may shed mythic tier negative levels. before the stress suppresses your phantom. You also may expend one use of mythic power to shunt a death, possession or negative level effect to the phantom when it’s within 30 feet. Absorbing a death/possession merges the phantom with the spiritualist’s consciousness.

-Spiritualist’s Call: Grant the phantom +2 t Str, Dex and Cha for 1 minute per tier when summoning it. Alternatively, only grant +2 to one of them, but have the benefit last 10 minutes per tier.

-Vigilant Phantom: Add +1/2 mythic tier to the Perception bonus granted; additionally, when you or the phantom are flanked, you may expend one use of mythic power as an immediate action to grant yourself and the phantom all-around vision for 1 minute, but you may only do this when adjacent to the phantom.

Jason Nelson’s array of feats for the medium, psychic and spiritualist are well-crafted, no doubt, My favorite design decision herein, hands down, is that several of the feats reward the spiritualist keeping the phantom close, as opposed to sending it forth. The decision to do that can modify the actual playing experience in interesting ways and makes particularly the spiritualist more intriguing. At the same time, the mythic feats herein often provide pretty straight enhancements when compared to e.g. the installment covering occultist and kineticist, making it less complex in its ramifications. Hence, I will settle on a final verdict of 4.5 stars, rounded down to 4 for the purpose of this platform, with one caveat: Mythic spiritualist may assuredly need this little pdf!

You can get this cool mythic mini here on OBS!