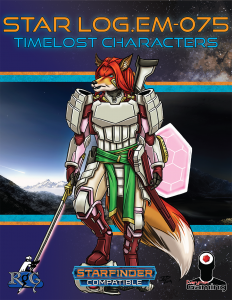 So, e.g. the fantastic Time-Traveler’s Hot Tub installment of Star Log.EM has established that time travel is possible, if rare – and this supplement provides the rules to play a character e.g. catapulted from the age of PFRPG to that of SFRPG, from a fantasy (or other ancient) setting to the Nova Age. Some of the feat classics for the old game have been converted, though. It should be noted that this is no conversion tool or the like, and it doesn’t require other Star Log.EMs to get the most out of it – instead, it is a tool that lets you play anachronistic characters stranded in the far future.

As such, we begin with a new theme, the timelost: The theme-knowledge lets you add a +1 enhancement bonus to your Strength for the purpose of determining bulk you can carry, and as much to Constitution checks to avoid the fatigued or exhausted condition. Knowledge pertaining your age of origin has its DC reduced by 5, and one skill, with the exception of Computers, is a class skill for you, or otherwise, you gain +1. Unlike most themes, you get to choose which of your ability scores receives a +1 adjustment. Minor nitpick: I was surprised to see Engineering not as exempt from the available class skills, but then again, taking a look at the marvels left from medieval times, I can’t fathom what the craftspersons back then would have achieved with tech, so I can get behind that decision. Same goes for Medicine and the knowledge lost due to Christianity’s witch hunts.

6th level nets the “Built Tough” feature, which nets you a difficult choice: 1 Stamina Point per level, and for every level attained, 1 Resolve Point, +1 enhancement bonus to Fortitude saves, DR/- equal to ½ base attack bonus, or your base attack bonus as energy resistance against one type of energy.  You get one of those. 12th level lets you once per day add +1 before making an ability check, attack roll, etc., and 18th level lets you choose a second benefit from the 6th-level array, but you must choose a different one.

The pdf then proceeds to present the timelost warrior archetype, which requires aforementioned theme. At 2nd level, you get a bonus feat as an alternate class feature, and at 4th, 6th, 9th, 12th or 16th level, you get another one. There is a catch, though: They may not list a class level or ranks in Computers as a prerequisite.

The pdf then proceeds to provide 7 new combat feats, which will indeed be familiar to veterans of PFRPG:

-Precise Shot: As a move action, steady your aim and choose an opponent within 30 ft. If you then make a ranged attack before the end of your turn, cover benefits to AC for a target chosen are halved.

-Double Slice: Requires Multiweapon Fighting; when making a full attack with 2 or more operative melee weapons, and at least one hits, the full attack penalty for the remaining attacks is reduced by 3, minimum 0. Does not stack with itself.

-Furious Focus: Requires Deadly Aim; no penalty to atk when using it for the first (or only) attack made with it.

-Shatter Defenses: Requires 5 ranks Intimidate or base attack bonus +6; when striking a target subjected to a fear-based negative condition, you render the foe flat-footed against your attacks until the end of your next turn.

-Vital Strike: Requires BAB +6; use attack action as a full attack instead; if you hit, roll weapon damage twice and add the results together before adding damage bonuses. This does not work for explode weapons. If you have 3 attacks in a full attack, you can choose to take a -4 penalty to attack rolls; if you hit, you get to roll damage dice thrice. From in-game logic, I’d consider it to make more sense if this applied only for melee weapons, but that may be me.

Editing and formatting are excellent on a formal and rules-language level. Layout adheres to the series’ two-column full-color standard, and the pdf comes with a cool artwork. The pdf comes without bookmarks, but needs none at this length.

Alexander Augunas’ timelost character options are pretty well-crafted, feeling like organic extensions of the core SFRPG-engine. The feats are potent and viable and help you translate the core style/experience of a character rather well to SFRPG. I am not the biggest fan of Vital Strike’s implementation, but as a whole, I consider this to be a very much worthwhile addition to the game. My final verdict will hence clock in at 4.5 stars, rounded up due to in dubio pro reo.

You can get this cool little pdf here, and play a time-stranded novice to the Nova Age!

Missed the hilarious, time-traveling hot Tub? You can find it here!

This pdf is part of the massive Starfarer-bundle, which you can find here!

The mastermind of Everybody Games, Alexander Augunas, is creating a new RPG via patreon – and I’ve seen several things that blew my mind! If you’re interested, please consider supporting Eversaga RPG here!