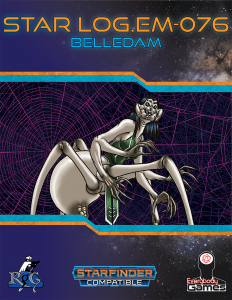 On the first page, we get something I was missing from the Alien Archive, namely precisely-codified rules for the web universal monster ability – I really enjoyed the precision of the rules here!

The Belledam was originally introduced in the Everyman Minis-series, but the SFRPG-version introduced here is not simply a copy: The belledam is a CR 14 creature that uses the spellcaster array, with ability score modifiers for ability score beyond the standard three boosted to +2, which is relevant for the creature regarding its initiative. The outsider bonus to atk has been properly implemented, and the save bonus has been assigned to Will. Damage values, DCs for spells and abilities and the like are all correct. Blindsense does, however, not list its subcategory (I assume (vibrations)…), and unless I have missed something the attack line for their multiattacks should be at +18, not +20. As a plot/boss monster, the belledam has more good skills than usual.

The creature has an array of unique abilities: They can animate severed parts of their body as independent creatures, and generate their own unique personalized demiplanes – and they have control over the egress, and, in a combination of their SPs, use their knowledge to duplicate copies of target homes. The belledam can also mark targets and even weave replicas of targets!! The latter is SUPER-Creepy and amazing – and if you have the excellent Occult Skill Guide: Cloning Ritual, you can use that here.

As a kidnapper of children and dweller of hidden rooms, belledams are essentially the horrific thing from the Coraline movies, just amped up to 10, and concept-wise, are frankly amazing – hence also the permanent marking of targets. The pdf also provides surprisingly detailed and inspiring information of belledam lairs and modus operandi. Finally, we do get a new feat, Gruesome Shapechanger, which has a cosmetic glitch in the prerequisite line: It’s supposed to be “Change shape universal creature rule”, not “Change shape creature type” – but that is a cosmetic nitpick. The feat lets you use Disguise to e.g. slough off your flesh or otherwise have a creepy shapechange effect that allows you to AoE demoralize targets. This is very potent, but has an anti-abuse caveat.

Editing and formatting are good on a formal and rules-language level. Layout adheres to the series’ 2-column full-color standard, and the artwork is neat. The pdf has no bookmarks, but needs none at this length.

Alexander Augunas’ SFRPG-version of the belledam is fully functional, dangerous and unique – I very much enjoyed it, and only the minor formal hiccups keep it from achieving even higher ratings. As written, I can’t exceed 4.5 stars, rounded down.

You can get this cool, creepy critter here on OBS!

Missed the cool Cloning Ritual? You can find it here!

The mastermind of Everybody Games, Alexander Augunas, is creating a new RPG via patreon – and I’ve seen several things that blew my mind! If you’re interested, please consider supporting Eversaga RPG here!

Enjoying my reviews? please consider leaving a donation, or joining my patreon!