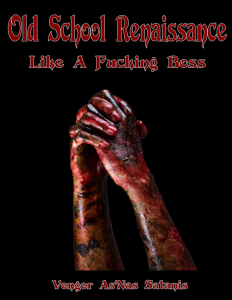 This pdf clocks in at 9 pages, 1 page front cover, 1 page editorial/advertisement, leaving us with 7 pages of content – oh, and it is FREE.

Which is also why I’ll diverge from my usual reviewing-template a bit: If you’re interested, check it out. It costs you literally nothing, and isn’t even PWYW.

What is this, and why did I tag it as “system neutral” instead of as “OSR”? Well, in short, this can be considered to be Venger’s 37-rule (+rule 0) manifesto for running games, a distilled array of pieces of GM-advice, aesthetics and tricks, and it genuinely is SUEFUL. It is not a book that will blow away veterans, but it is a great little pdf to flip open once in a while to refocus. When you read “Your NPC sucks” as a rule title to make you recall that you shouldn’t get too attached or hog the PC’s spotlight, the impact is immediate and efficient. Keeping the foreshadowing high, running with themes, milking what works and the PC’s idea, retaining of mysteries, etc. – this is not world-shaking, but the collection of these rules is indeed helpful.

And it is helpful, as a whole, beyond the confines of the OSR. Sure, rolling just ONCE is not always possible in more rules-heavy games, and abstract combat or getting slain PCs back in? Also not always feasible in a speedy manner. However, letting the player of a slain PC play an NPC for a while? Totally possible. That’s why you have those NPCs stats, right? In short: The vast majority of the rules apply beyond the confines of the OSR and its aesthetics.

That being said, there is one instance here I have to poke fun at: The trouble-shooting section for too long combats notes to keep healing, both natural and magical, in check, when ridiculous infinite healing exploits that break the attrition and resource management tenets  is exactly the main issue I’ve had with the last couple of installments of Venger’s Crimson Dragon Slayer systems- Sir, please listen to your own advice, it is sound. 😉

That aside, this is a neat little booklet, and it won’t hurt to read it as a refresher, regardless how experienced a GM you are. And for FREE? Heck yeah. 5 stars.

You can get this pdf for FREE here!

As an aside: Venger’s massive KS-adventure for Cha’alt was upgraded to 128 pages, and will be offset printed by Friesens! The KS only has 27 hours to go as per the writing of this review, so if you want in on one of these strictly limited books, act now! You can find the kickstarter for Fuchsia Malaise here!