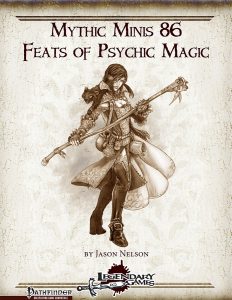 -Fearsome Spell: Add + tier to the number of rounds affected creatures are shaken on a failed save. Non-mythic adversaries are shaken for 1 round on a successful save, frightened for one round and then shaken on a successful save. Question: Is the round of being frightened on a failed save part of the modified duration of the shaken condition? Clarification would be nice here.

-Furious Spell: Add +3 times the spell’s level to the damage inflicted as well as +1/2 mythic tier to concentration to cast such a spell while raging. Creatures failing their save take a -2 penalty to saves versus [emotion] spells (excluding fear) for spell-level rounds. The penalty increases to -4 when the spell deals with anger, hatred or compelling creatures to attack others.

-Hidden Presence: + mythic tier to saves versus non-mythic spells this feat protects against. Here, we have a strange wording hiccup: “This penalty is reduced to one-half your mythic tier (min 1) against mythic spells of those types.” That’s supposed to be “bonus”, I think. When using the surge die for such a save, you may also roll the surge die twice, taking the better result.

-Intrusive Presence: When using detect thoughts on the host, you become fluent in 1/2 mythic tier, up to Int-mod languages. You also add 1/2 mythic tier to the times you can use seek thoughts. You may expend two uses of seek thoughts to instead use dream scan, mind probe or sow thought, though these retain their saves. Very cool!

-Intuitive Spell: You may cast personal-range intuitive spells even while dazed, fascinated, stunned or subject to a mind-affecting effect, as a full-round action. You may use one mythic power to cast a spell as intuitive sans preparing it in advance, increasing casting time or spell slot/level.

-Logical Spell: Allows you to target a creature with a logical spell sans line of sight, provided you know the square it’s in. Competence and insight bonuses to AC and saves are ignored by the logical spell. For one mythic power, you may prepare a logical spell sans preparing it in advance, increasing casting time or spell slot/level.

-Manipulative Presence: Alter or erase up to 10 minutes per tier of the target’s memories; alternatively, 1 minute per tier, with the target being forced to save twice and take the worse result. This double roll only affects the memory alteration. If you possess a non-mythic creature with HD less than your tier, its memory of you possessing it is erased even on a successful save. This can let you weave very intricate plots indeed. Like it!

-Scarring Presence: Apply the feat to any mind-affecting spell; when used in conjunction with [fear] or [emotion]-spells, the penalties are doubled. If the [fear/emotion]-spell’s mythic, the target takes a penalty to saves and thereafter suffers a penalty of -1 versus such spells for mythic tier minutes.

-Traumatic Spell: Apply the feat to any mind-affecting spell; when used in conjunction with [fear] or [emotion]-spells, the target must continue to save until it successfully saves on 2 consecutive nights and the save DC only decreases by 1 per night. If the feat is applied to a mythic emotion or fear spell, creatures failing the save are affected by mythic nightmare and non-mythic creatures must save on 3 consecutive nights to get rid of the effect.

Editing and formatting are very good, though not as good as in most installments of the series. Layout adheres to Legendary Games’ two column full-color standard and it features the artwork on the cover; that’s it – the one page content is solely devoted to crunch. The pdf has no bookmarks, but needs none at this length.

Jason Nelson’s Feats of Psychic Magic generally are well-crafted, evocative and offer some neat upgrades. At the same time, there are a couple of minor wording hiccups, one of which is rules-relevant. In spite of that, I still consider this a worthwhile purchase, if perhaps not as amazing as in some other mythic minis. Hence, my final verdict will clock in at 3.5 stars, rounded up to 4 for the purpose of this platform.