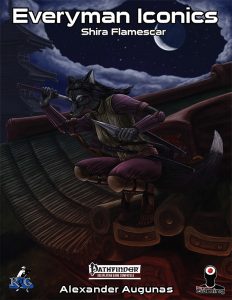 This installment of Everyman Iconics clocks in at 25 pages, 1 page front cover, 1 page editorial, 5 pages of SRD, leaving us with 18 pages of content, so let’s take a look!

Hej look, it’s been one full installment of the series since we had a Kitsune character! Damn time we got another one! 😉 Kidding aside, there is a good reason beyond the author loving the race for Shira being up next: Beyond having featured as a character in artworks of Everyman Gaming products before, the black fox Shira was originally the cohort of Kyr’shin Yilenzo, the pretty cool Kitsune featured as the first installment in the series.

Born into a clan of kitsune enslaved by humans, Shiras childhood was anything but nice and when her parents died at a young age and she was taken in by the mtriarch, things did not get better: Where all other kids were taken to new families, her dark complexion was seen as a sign of being touched by the oni and she was shunned, as she was forced into manual labor. By virtues of her talents, she managed to gain tutelage in the art of war, though her sensei was pretty soon executed. Escaping the chopping block, she led her people to freedom…or so she hoped. Instead, they shipwrecked on a jungle-island, where they were prey for the nasty cyclopes living there – it is here she gained the nickname flamescar for routinely singing her fur to make her undesirable as pelt for the evil giants, all while waging a nasty guerrilla war against the beings – one that only ended by the arrival of Kyr’shin and his group, to who, as a means of thanking them, she professed her loyalty.

Shira employs the heroic NPC wealth and attribute array and utilizes two archetypes, the Kenshi and Scout. Her build does not multiclass, providing a linear progression of the ninja class from level 1 – 20 and, as always, the character’s table lists advancements and feats/options chosen and gained at the respective level for your convenience and easy customization. The respective ninja tricks and ninjutsu arts are covered in the progression as well…and while you*could* generally use her as written, you’ll notice some discrepancies between the base ninja-class and Shiras build.

Well, there is a reason for that, for her build uses Everyman Unchained: Unchained Cunning’s Unchained Ninja as the base class. Now thankfully, the pdf does designate all the 3pp-options employed, namely a rogue talent from the superb Ultimate Charisma and A LOT of material from aforementioned Unchained Cunning. The Kenshi archetype can be easily removed…but considering her base class – well, the pdf thankfully acknowledges that making her a normal ninja would basically invalidate the whole build So yeah – it’s unchained ninja or bust. It’s not a problem as far as I’m concerned, but I still felt obliged to mention that aspect.

Shira’s feats are represented and reprinted, as always, and her trait choices are provided for as well: Again, it’s Killer (had that with Drake, too) and Life of Toil. Her spell-like abilities are similarly depicted. Now as far as her build is concerned, it makes GREAT use of the unchained ninja framework: Basically, she is a deadly skirmisher/hit-and-run character who can hit HARD when played right. Her focus on generating darkness and soft crows control (as far as getting her) is concerned make her a surprisingly effective build, though yes, my minmaxing friends, you could escalate that. In short, her NPC-builds make for valid challenges for the respective levels and should be fitting for most tables out there.

The pdf, however, does not only feature the NPC-builds; instead, we get three builds for player-wealth (with a landscape format and abilities spelled out, making instant use pretty simple) at level 1, 4 and 7. Here, we somewhat have a damned if you do, damned if you don’t situation, for these builds use the regular ninja class with the two archetypes. So if you wanted a pregen unchained ninja…well, then you have to use the NPC as a base. Wealth is level-appropriate, though, once again, no point-buy-scaling advice is provided.

Editing and formatting are very good, I noticed no significant hiccups. Layout adheres to a nice two-column full-color standard and the full-color art provided is neat and consistent. The pregen-versions, as mentioned, are in landscape format instead. The pdf comes with bookmarks, but does not have bookmarks for the respective iterations of the character, which may be considered to be a minor comfort detriment.

Alexander Augunas delivers a cool unchained ninja with Shira and her build, while pretty straightforward, uses the archetypes and unchained ninja framework rather well to generate an ally or adversary well worth facing or fighting with. Her tactics and options make Shira a pretty cool ninja build that gets extra brownie points for not relying on cheesy flurry of stars exploits. While not perfect, the installment can thus be considered to be a well-crafted addition to the series, worth a final verdict of 4.5 stars, though I will round up for her, considering that her build is more creative and interesting than what you’d expect from a ninja.

You can (and should) get the unchained ninja class here on OBS!