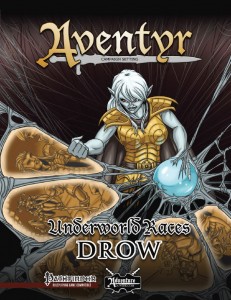 This supplement clocks in at 24 pages, 1 page front cover, 1 page editorial, 1 page ToC, 1 page SRD, 1 page back cover, leaving us with 19 pages of content, so let’s take a look!

We kick off this installment of the Underworld Races with a general subterranean origin-myth for the races that inhabit the lightless depth of Aventyr – which can, coincidentally, be introduced with relative ease into other settings. Now part of this myth is the origin of the most famous of subterranean, evil races – the drow. The dichotomy and splitting of the elven races takes a more classic turn in the example of Aventyr than in Golarion’s take on being drow. The association with spiders and poison in the prominence of the Goddess Naraneus, a matriarchal society -all classic elements one may or may not like are in here.

In a nice twist, female and male drow receive different minor modifications to their skill sets and the favored class options provided are nice as well, though personally, I would have loved to see a gender-divide there as well. In a slightly problematic formatting decision, there are no new racial rules immediately following the header that announces them and we instead follow up with information on new equipment – either something got cut out here or the formatting is problematic.

Now drow receive some rather awesome alchemical items that massively influence the fighting styles of drow – from web shackles to webbing that may attach weapons via webbing to arms (great versus disarming or after throwing weapons) to the special ink and paper drow use make for cool options. Shadowy water that increases the potency of the stealthy drow, soldier’s rations and mage hand-utilizing gloves.

A total of 6 racial feats provide drow with further tricks -requiring less sustenance, receiving bonuses versus a specific target who managed to elude your wrath, a grudge-feat versus surface elves and one to master feinting with drow weapons make for nice ideas – especially arachnid acrobatics is cool – for an acrobatics-check, the drow temporarily receives a climb speed – yes, spiderman would be jealous.

The pdf also provides a new domain, the drow domain – the domain abilities allow the cleric to sheathe weapons in negative energy and take damage to improve the senses of the cleric – which per se is a cool ability. Taking damage for improved sight is cool…alas, as soon as a drow is undead, this ability has the unintended consequence of being a free, unlimited, if slow, healing option. Granted, since the duration of the improved sight is tied to the damage taken, the sight component becomes nigh useless, but who’d care?

This domain also provides a grand total of 9 new exclusive spells that allow you to render targets flat-footed for one round, clothe yourself in shadow or step through the shadows and even provide some protection against light-based attacks. What about making high-level undead that retain some of the capabilities of the deceased’s capabilities while they still had their mortal coil. The level nine spell is particularly nasty in the negative energy, ability damage and regular damage the spell deals – still (with leeching), the amount feels somewhat less than what I would have expected at ninth level – especially since the ribbons require touch attacks.

Mike Myler & Julian Neale’s drow-sourcebook provides some nice options and especially the items herein can be considered truly awesome. The information on the society, items and some of the tricks the drow offer here are universally compelling and cool…but that being said, the domain just isn’t inspiring. It’s not bad, but neither is it glorious. While greatness can be found here, e.g. in the weapon webbing, the arachnid acrobatics etc., the pdf is a bit on the short end and for that; I do think that e.g. a glorious beast like the dvergr’s underminer or similar truly mind-boggling content would have helped this pdf. As written, it is a good, if not particularly remarkable book on drow and well worth a final verdict of 3 stars.

You can get this solid supplement here on OBS!