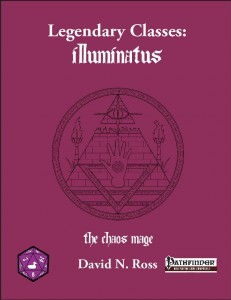 This supplement clocks in at 37 pages, 1 page front cover, 1 page editorial/ToC, 3 pages of SRD, leaving us with 32 pages of content, so let’s take a look!

So what is the chaos illuminate or Illuminatus? First of all, the class would need to be non-lawful. It receives d6,4+Int skills per level, proficiency with simple weapons, 1/2 BAB-progression, good ref and will-saves and spellcasting of up to 9th level via a unique spell-list. Speaking of spellcasting – while it does work via cha and spontaneous, the casting works different than for any other class – Illuminati don’t cast regular spells, rather learning to cast so-called wonders instead. Each wonder is associated with a d8-throw: Wonders are cast as a standard action with V, S and F -F? Yes, for to cast spells an illuminate requires a so-called implement, which they not only require to cast wonders, but also to use marvels, the first of which they acquire at 2nd level, +1 every 6 levels thereafter, depending on the implements the illuminate uses. Marvels are full-round action and of a varying ability type, hence adhering to different base-rules – save-wise, these adhere to the 10 +1/2 class level + cha-mod formula.

What about the chaos-aspect, you ask? Well, it’s simple – each casting of a wonder is accompanied by a roll of d8, with a 7 or 8 meaning that the respective illuminate can control the wonder to produce any effect. Otherwise, the illuminate has no control over the effect the wonder produces. However, the illuminate *does* have control on where the spells resulting from the wonders go off, allowing for a certain modicum of control. It should be noted that metamagic and item-use purposes et al have been covered in the system..and that this is not where the class ends.

The illuminate also receive a 1/day reroll of a d20, +1 re-roll at 5th level and every 4 levels thereafter. 3+cha-mod times per day, the illuminate may also re-roll wonder-rolls or re-draw cards for abilities of magical item purposes (which adhere to a chaotic rule-set akin to that of casting wonders…) , should you choose to utilize cards when playing the class.

Now at 4th, 6th, 10th, 12th, 16th and 18th level, the illuminatus receives a so-called attainment, which essentially can be considered as the talents of the class, with the list being expanded by greater attainments at 10th level and even more with superior attainments, which are unlocked at 16th level. Attainments generally can range from reliable spell-like abilities (with interesting mechanics, like a 1-hour cool-down) and also contain interesting options that allow for a kind of primal flux (a wonder like fluctuation), duplication of an effect by subsequent re-castings of wonders on rounds following an individual cast. The attainments provided are extremely diverse and allow for quite a different array of builds, more so than one would expect from such a class.

Now I already mentioned implements – these are important beyond acting as a focus, also influence, somewhat like bloodlines, the selection of wonders available to the illuminate -from books to bottles, cards etc., a total of 8 such complex suites being provided, the implements also defining the capstone marvels. The respective spell-lists of illuminati are hence all micro-tables of 6 possible spell-effects that are provided by school – for each spell-level. Mishap-effects, extensions of class abilities, chaotic metamagic and increased control over wonders can all be achieved with the selection of new feats. Unlike many similar supplements, the feats more often than not, do not require illuminatus class levels, allowing other classes to dabble in chaotic powers.

Speaking of which – the opportunity and wonder cleric subdomains, 3 mishap-centric rogue talents, the primordial wildblooded sorceror mutation and the arcane experimenter wizard archetype make sure that chaotic magic that is less predictable does not remain the providence of the illuminatus. Warping magic and adding mishaps as injury to the insult of having your spells dispelled, generating wild magic zones – the new spells herein do come in a nice variety and magic items like coins that either summon good or evil outsiders and knucklebones that generate catastrophes also add a bit of excitement to the game.

Beyond even these supplemental pieces of information, we actually do receive 2 universal mythic tier abilities to influence fates and duplicate mythic spells with wonders – and we also receive support for groups utilizing hero points in the guise of 3 unique attainments in addition to the vast array provided, as well as one exclusive subdomain. Finally, a sample character of 1st level completes this extensive, massive class book.

Editing and formatting are very good, I noticed no significant glitches. Layout adheres to PDG’s printer-friendly 2-column b/w-standard with purple accents and the pdf does sport some thematically-fitting full color artworks, though you may know some of these from other sources. The pdf comes extensively bookmarked with nested bookmarks for your convenience.

Author David Nicholas Ross tries his hand at one of the more complex themes one can tackle regarding spellcasting – getting chaos magic right. On the one hand, you want a system that by design, delivers unexpected results, while still maintaining enough control to keep the class useful and relevant in game. Balancing the wonders and the associated spells among them must have been a rather challenging endeavor and the addition of attainment and their structuring in 3 different classes of power-levels as well as the abilities granted by implements allow for an array of different options to properly exert *some* control over the playing field. Beyond being mechanically interesting and innovative, the class delivers supplemental content galore that goes above and beyond making the concepts feasible for just about every world. Small fluff-boxes, feats and chaotic caster-level adjustments, mishaps – all these add another, neat dimension to the topic at hand and help bring the unpredictability back into magic. The illuminatus is a great class with cool options and one that is actually more complex than one would expect – the moving parts are neatly tied together, the class is easy to grasp and difficult to master and there are not that many classes of this high caliber out there. My final verdict will clock in at 5 stars + seal of approval – add some chaos into your magic and make it feel magical and weird again!