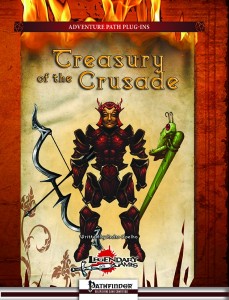 We begin this supplement with a very handy table of item prices, ranging from 466 gp to artifact status – I always consider item summaries like this to be helpful when looking for loot to hand out.

We begin this pdf with a new piece of armor – but what kind of armor! The abyssal carcass looks like a grisly, skinned and raw, blood-red flesh – a constant reminder of the terrors inflicted by the hordes of the abyss. Mechanically, the armor has a unique trick – when damaged, the wearer accumulates taint as the armor absorbs the abyssal energies. This taint only lasts for a time and sports a fixed threshold of 10. Taint then can be expended to e.g. count as chaotic evil for the purpose of spells and abilities, to gain some demonic defenses, etc. – essentially, this allows the righteous champions to turn the weapons of their foes against them – pretty cool!

The crusader aegis would be a nice, defensive item – while powerful in its own right, its true value becomes apparent once the stalwart hero falls. Should the hero be slain, the item will immediately guard the soul and body of the fallen champion with various spells and furthermore facilitate a return to life, particularly for heroes with a significant array of mythic tiers. Rules-wise interesting would be the ironstretch buckler: Capable of transforming the wielder’s arm into a shield bash-compatible iron arm (including getting the shield bash rules right), it allows for a nice switch in strategies that pay for the flexibility thus gained with minor drawbacks while the arm is iron. The mind mirror is a tower shield that is on the nasty side – showing a perversion of the people staring into it, it does sport a low save (DC 13) upon successful mind probing – this gaze attack with its dual saves is solid for the low asking price. Screecher is a shield for terror-tactics that requires a wielder with favored enemy to properly utilize: While the shield is screeching, Stealth may be nigh impossible, but at the same time, emitting sonic damage in bursts that only targets the favored enemy can be considered a powerful option, especially in campaigns like WotR, where most enemies adhere to one type.

Obviously, there also are nasty armors out there – and strangling straps, an armor that seeks to destroy the wearer while he’s fighting demons, would be one of them – I do consider it interesting that the armor can be redeemed and applaud this kind of design. On a nitpicky side, the rules to rid yourself of the armor via grapple feel pretty conservative regarding the DCs and the wording here deviates slightly from the rules-convention. The armor works as written, though.

The Crimson helix shortspear provides devastating criticals that bleed (only once, if the character is already bleeding) and make healing them problematic. As a nice, additional option, it can blind foes in bursts or cones. Nice one! The Fiend Leash is more interesting still – a repositioning net that is particularly crafted to eliminate demons, it has resistance bypassing cold damage and thankfully cannot be shaken off by simple teleportation. The blowgun firespitter not only allows for the emission of flaming projectiles that can ignite targets, it also enhances fire-based spells and spell-like abilities. The restriction of only one use per round, though, feels unnecessary to me – the item isn’t so strong as to require this caveat. Flareup Arrows are solid in regular gaming, but reach their full potential when used in conjunction with the mass combat rules, where they not only change battlefield illumination, but may also prevent routs.

The Mythscourge is a unique item – this bronze spike exists solely to negate mythic power, rendering it e.g. also a great insertion to a regular campaign, if you’re an evil GM like yours truly that send mythic foes after non-mythic PCs…And yes, this beast can eliminate all mythic ranks or tiers. OUCH! The Razor Bow doubles as a two-bladed sword that gets DEx to damage if the wielder has Weapon Finesse and it furthermore makes all arrows fired adamantine…oh, and for mythic power, you can make your nat 20’d atk-rolls vorpal. Oh, and the item has a built-in means of becoming a legendary item. Nasty indeed!

Splitting Bolts not only are economical and can fit more into the same space – they also negate concealment and have a decent chance of making the opponent flat-footed versus an attack executed with them. The Warforge Hammer, blessed by Torag, can repair items and ignore 2 points of hardness. Okay, I guess – but I’ve seen that one done so damn often…

3 rings are next, with the kinship pledge ring coming in doubles that help the two wearers, particularly increasing the bonuses of aid another and teamwork feats. The Ring of Backstepping, powered by mythic power, allows you to return to your previous position as a nice last second save – for example, when you’ve been dragged into the abyss… The ring of alternate paths lets the wearer choose another mythic path. From here on out, every day, the wearer may swap one mythic path ability of his own path with one of that chosen path of equal or lower tier. Additionally, the rings make divinations against the wearer less likely to succeed. Thankfully, two such rings cannot be combined. One note regarding their rings – instead of “-” in the weight-line, they all have a strike-through box as a minor formatting relic. This does not influence my verdict, but I figured some of you would want to know.

Two rods are next, both being distinctly nasty – the Locust Rod doubles as a light mace that can summon a fiendish locust swarm within your foes – and yes, this is as painful as it sounds! Worse, if they don’t get out, that may actually prove more detrimental…yes, great imagery here! The rod of torment can either be used as a punch dagger or as a light mace – though the former allows for a debilitating infusion that may send creatures with HP below 100 immediately into a dying state. The rod can also be recharged via mythic power…awesome. The staff of the raised horde is awesome when used with mass combat, allowing for the temporary revival of the fallen for one last stand against the foe. And yes, this may be an evil staff…but we’re fighting demons…love this slippery slope! Summoner’s Scrambler Staves will be LOATHED by summoners – it allows you to siphon off summoning magic and use it to power his own – pretty awesome and rather effective, if I may say so.

The pdf also sports numerous wondrous items – ascension catalysts allow for the upgrade of potions to mythic levels…but they can also imbibed to grant the target 1 temporary use of mythic power for 1d4 rounds. The latter is HIGHLY problematic: Mythic Adventure’s one halfway decent balancing mechanism is centered on mythic power being a non-refreshing resource. By putting a price on even an unstable, short-term way of regaining it, one risks the whole system crumbling down. I sincerely urge GMs to severely restrict the availability of these, unless they want PCs stockpiling these like crazy. And no, the “it takes actions to draw and use”-argument is not valid: There are means to offset the action-tax. A box that contains an angelic choir is an interesting take on the canned spell with a nice imagery, but personally, I prefer gloves that allow the wielder to modify and change the properties of liquids touched: The feeling the gloves evoke is close to the superhero-style implicit in Mythic Adventures. The Pleading of the Crusades has solid interactions with established items and modifies e.g. aura of courage in a nice way, while the planar atlas helps with all magical long-distance travels. Seeds of discord allow for the poisoning of not the body, but the souls of the victims and stygian coins allow for the summoning of Charon – who may pass judgment on those that fail his moral code.

The pdf also provides artifacts, the first of which would be Deva’s Wings – these not only contain the sadness of angel, but they may also be attached to a creature, granting flight, the angel subtype and the option to call creatures of the heavenly host t the rescue. Finally, there is the dimensional bomb, dubbed the anti-demon-nuke. What if the world hated you? Well, demons are about to find out, as this bomb temporarily makes the whole PLANE lawful and good. Yes, if you take a look at the planar traits, this *IS* extremely powerful…and awesome. And yes, obviously, this is a one-use item.

Conclusion:
editing and formatting are very good, though not perfect. Layout adheres to legendary Games’ two-column full-color standard for Wrath of the Righteous-plug-ins. The pdf comes quite an array of nice, full-color artworks and the pdf comes bookmarked for your convenience, but only by category, not by individual item.

This is the first pdf by Pedro Coelho that has made its way under the scrutiny of my gaze and I have to say that I am generally surprised. The content itself, more often than not, manages to evoke truly iconic concepts and imagery – The abyssal carcass read like it was created by Clinton J. Boomer and I mean that as a compliment! The locust rod and quite a few other items herein sport absolutely awesome imagery – though this does not extend to all of the items herein. I particularly loved the synergy with mass-combat rules and the unique options presented in that context, so kudos once again. On the down-side, some items herein felt somewhat less awesome to me…and then there is the issue with ascension catalyst. Putting a price on mythic power regaining is NOT a good idea – even if you strictly enforce WBL, there are ways to break the bank and the rules-ramifications of fluid mythic power-regains, even only temporarily, are massive – essentially, it eliminates the one restricting component that keeps the most powerful of mythic options at least partially in check. I strongly urge GMs to disallow the crafting of these items and to be conservative regarding their availability.

That being said, this is one component in this pdf and there are quite a few items that definitely make this a worthwhile purchase – hence, my final verdict will clock in at 4.5 stars, rounded down to 4 for the purpose of this platform.

You can get this nice array of magic items here on OBS and here on d20pfsrd.com’s shop!
Endzeitgeist out.