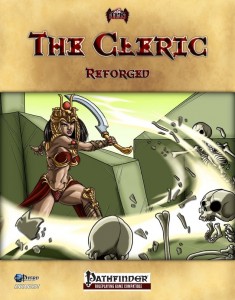 The first installment of TPK Games’ new take on established classes clocks in at 17 pages, 1 page front cover, 1 page editorial, 1 page SRD, leaving us with 14 pages of content, so let’s take a look!

Okay, so what does this pdf do? On a basic level, the class remains intact – channel energy progression remains the same, spells, save, BAB. Knowledge (local) has been added to the skill-list, which makes sense and the class gets 4+Int skills per level instead of the default 2+Int.

Now the table makes sure that you notice one thing – the domains have been rolled into the standard array of spells, but more on that slightly later.

At 1st levels, reforged clerics can choose to lose medium armor proficiency to receive an item crafting or metamagic feat. Nothing to complain here. The channel energy class feature gets a power-increase – at 7th and 15th level, the AoE of channel energy increases by 10 foot – which is rather powerful and something to be aware of, especially due to another option, the divine bolt. These are touch attacks, have a range increment of 30 feet and willing targets can easily be hit against AC 5. Critical hits with healing bolts heal twice the HP. Now on the one hand, this looks awesome. I *love* the critical healing etc. On the other hand, this is much more powerful in reality than on paper. Channel energy’s main drawback is that it does not discriminate – it requires planning, tactics, careful positioning (and a feat-tax!) if you don’t want to end up healing foes. This ability takes care of ALL of that. Add to that that it’s ranged in contrast to heal-spells and we have a VERY powerful ability – one too powerful for being an additional option. Now as a REPLACEMENT? Heck yeah! Now it’s an option, but one I’d caution DMs to carefully consider before allowing it. I’d suggest replacing vanilla channel here. It should also be noted, since the pdf does not explicitly specify it, that the bolt, RAW does provoke AoOs, so another reason to keep the cleric away from the front lines.

Now regarding domains and spellcasting the reforged cleric becomes interesting – the cleric loses the ability to spontaneously cast cure/inflict-spells and instead learn to cast the spells from their domains spontaneously. (Note that they may thus learn to spontaneously cast heal/inflict via domains.) At least that is what the designer’s notes spell out. And unfortunately, the Pdf immediately contradicts this by stating that the spontaneous casting remains. I’m not sure whether that’s a remnant, but personally, I think the standard spontaneous casting ought to go to make up for the increased flexibility granted by the domain-spontaneous-casting.

2nd level reforged clerics may expend channel energy to receive sacred/profane bonuses to one skill, save or attack roll as an immediate action. At 4th level, the reforged cleric receives a last second save that allows the cleric to channel a self-only divine energy as an immediate action upon being reduced to 0 HP. I like the intent here, but I consider the cost too low – this is essentially a built-in hero point-prevent-death system that refreshes daily. I could roll with 1/day or something like that as a FEAT or something like that, but flat-out? Nah. Clerics already have formidable buffs, armor and healing – they don’t need this additional insurance if played properly.

The capstone (YEAH – finally!), a permanent consecrate/desecrate aura is per se awesome, but imprecisely worded – “In addition, they deal their charisma modifier as channeling damage to creatures of opposing alignments within the aura.” Is that per round? Per channel? Clarification required!

The roleplaying advice and pointers toward variant channeling here are nice reads. A total of 28 feats follow…and they are partially horribly, terribly BROKEN. Take “Concussive Channeling” – when you channel energy, you also initiate a bull rush with cha instead of str to CMB for +1 channel energy. Now don’t get me wrong – the imagery is awesome. But the rules…Urgh. Ranged, or worse, AoE combat maneuvers? Just plain nasty, especially due to a lack of prerequisites. This can be taken at first level Same goes for AoE-tripping. Other feats add negative conditions to channel energy targets that failed to save, which is okay by me.

Want some more examples of utterly broken stuff that should have never made it past playtesting? What about Maximized channeling for 2 channel energy uses? Double range channel energy for the same cost? Or the utterly ridiculous ranged channel at 25 ft + 5ft. per level for +1 channel energy? I do not hate the idea of essentially metamagic channeling – there are feats for that. But if you start treating AoE-healing like spells, you break balance…HARD. There’s a reason the mass heal spells are that high a level. Add selective channeling and things become utterly and totally ridiculous. Now temporarily imbuing channels in other characters at increased costs is also strong, but great for the cleric player and tactics. Not all feats herein are bad: Casting a spell with target “you” as a move action by expending spell-level channel energy and not requiring somatic components or provoking AoOs is a great idea. Alas, the execution – so, does this expend the spell as well? What if a spell has a duration of e.g. an hour, can I still cast it in one move action? It’s glitches like this that ruin per se promising mechanics. E.g. using wis-mod with divine bolt instead of dex-mod makes sense – though personally, I think channel is governed by charisma, not wisdom. I get the intent, but it dilutes the attribute-ability-alignment.

Improved versatile channeling of alternate channel effects etc. is nice, as is the option to choose more variant channeling channel types. The pdf does come with extensive favored class options for all CORE and ARG races. The FCos are generally cool.

Hereafter, the pdf provides 7 rough concepts (no stats, mainly fluff of god, alignment, race etc.) for different cleric types and some nods towards other 3pp resources for clerics.

Editing and formatting on a formal level are fine, but on a mechanical level, I can only wonder which balance measure was applied to some of these options. Layout adheres to a printer-friendly two-column , mostly b/w-standard with thematically fitting stock art. The pdf comes excessively hyperlinked and bookmarked for your convenience.

The cleric is a strange case of a class – on the one hand, it needs help and on the other, it doesn’t. What I mean by this is: The cleric already is one of the strongest classes in PFRPG and I’ll fight anyone who claims otherwise. I’ve had years upon years of overpowered clerics in my campaigns and I know what these guys can do. On the other hand, clerics also need help – because they usually fail at their given role as a divine caster – they don’t feel like pious casters, but rather like general casters with the divine label slapped on. To add insult to injury, the poor clerics often have to go into the role of the heal/buffbot and you have to be a particular kind of person to enjoy this. So in that regard I think the class needs help.

The variant channeling rules from Paizo helped a bit, and takes like Rite Publishing’s Divine Channeler (who makes for a ridiculously powerful healer with the right feats, btw.) have made this heal-boting more interesting. So what makes this one interesting? A) The simply channel energy for bonuses – elegant, cool, nice.

A stroke of brilliance is imho the divine bolt, but damn, it NEEDS to replace regular AoE channel energy to not be utterly overpowered. Even as a replacement, it makes almost all heal-spells up to their highest echelons obsolete – even before the new feats.

Which just…take me on the same rollercoaster ride. High in concept, many of these do not survive even casual contact with math. Balance curls up in the corner and cries, as utterly op feat after op feat, all with cool, shiny, high-concept ideas, start curbstomping it till it stops moving. And on the other hand, some feats herein actually work fine. You either get a winner or a total trainwreck. I do pity all DMs who allowed these feats sans restrictions in their game. And the worst thing is – there is NOT ONE piece of content herein that cannot be salvaged. NOT ONE. These almost universally are *so* close to working in awesome ways. And then go wrong. A talented designer/DM who wishes to make these work can easily do so, but as written, the content herein is simply op. It is obvious that no one here has even bothered to check average damage healed/output scenarios and it’s a pity – for if this had received the polish it lacks, we’d be looking at a cleric that is superior in every single way without being broken.

The Reforged Cleric still is not a bad pdf – yes, every sense of even remotest notions of balancing would be misplaced here, but this beast offers a *LOT* of excellent ideas to scavenge, modify and introduce to your game. So if you’re looking for something to tinker with and be inspired by, this delivers. If you’re looking for a balanced replacement of the cleric, then this is not for you, surpassing even Rite Publishing’s very strong Divine Channeler by quite a stretch. This has been a depressing affair for me and I sincerely hope that Brian Berg one day fixes the utterly overpowered components. My final verdict will clock in at 2.5 stars, rounded down to 2 for the purpose of this platform. If you’re looking for idea-scavenging, add +1 star.

You can get this pdf here on OSB and here on d20pfsrd.com’s shop.