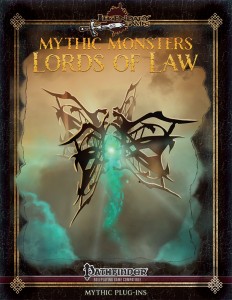 As always with the mythic monster-series, we begin this pdf by taking a look at the introductory supplemental content – which, this time around would be an utterly delightful taken on archons, axiomites and kytons – written by a protean! The delightfully demented whimsy, coupled with downright disturbing callousness and a dissolution of meaning provided in this short introductory text makes it a great hand-out and an awesome lead-in to the subject matter.

We begin with my group’s erstwhile celestial commander summoner’s (R.I.P. – my mythic skinsaw man killed that one…) favorite creature – the hound archon, whose mythic iteration clocks in at CR 5/MR 2. Interesting would be here that the new abilities granted, which include hunter’s eye and hunter’s howl at will render them more efficient at their flavorful role – supplemented by being swift stalkers and tireless, gaining immunity to exhaustion, fatigue, etc. Beyond being a nice build, we also receive a glorious full-color artwork of the hound archon – neat! The lantern archon (CR 3/MR 1), obviously featured on the cover, may add mythic faerie fire to the blasts via mythic power and even have it go up in a burst. Oh, and mythic characters can take these as familiars. Neat indeed!

At CR 23/MR 9, star archons get celestial armament (powerful armor + weapon), gain domains and, as tacticians of the heavens, they gain teamwork feats which they then may share with others. Oh, and they may transform any fire damage into half untyped damage (or convert a flame strike into full-blown untyped damage!) and/or use mythic power to mythify the spell/SP in question. Better yet, they may have their starknives dance around them to kill foes and treat charges as duplicating sunbeam, phasing ahead – damn cool imagery, once again supplemented by a great new artwork. At CR 17/MR 7, Trumpet Archons also get access to domains (though different ones) and gets a deadly ability that crystallizes foes into statues or shatter objects with a perfect note- with a cool-down, but no other limit. Love it! Beyond these, access to bardic performances and the option to make the trumpet a truly lethal weapon, better defenses and mythic spell-in-a-can effects as an SU make for a well-rounded creature – again, with an awesome full-color artwork!

Moving on from the archons, the next new creature would be the mythic Axiomite at CR 10/MR 4 – beyond crystalline swords and the option to turn into crystal dust. Beyond that, a cool aura prevents transmutations and can be expanded via mythic power, nicely emphasizing the notion of the unflinching calculus. CR 3/MR 1 Azers can walk across magma (And for mythic power, even over flames or smoke!) and also sport a mythic feat to suppress their vulnerability – solid one, I guess. At the same CR/MR, inevitable arbiters may bestow the gift of law to targets – all d20-rolls are treated as 11s. Add to that the new tactical analysis ability and we have a well-crafted, unique and awesome creature that mirrors well the power of reliable and unflinching law. Oh, and yes, it has a unique artwork. The CR 15/MR 6 kolyarut doesn’t have one, but treats its attacks as axiomatic. It also gets mythic SPs and is generally pretty nice – however, there is a thing to note: The Lawbringer-ability nets the creature SPs, which are called SPs in the text, but the ability is declared as EX – essentially, the expansion of the abilities is EX, while the abilities themselves are SP. This is not bad or anything, but in the face of the creature’s theme it makes sense in pointing out this ability dispersal making particular sense on a meta-level for creatures of law. Beyond this, compared to the other creatures, this one felt a bit lackluster. The CR 18/MR 7 mythic marut also has a similar SP-expansion, with this time final death being the theme (obviously) and the fists receiving a damage-escalation. The creature also gets a cool artwork. CR 11/MR 4 inevitable zelekhuts make their weapons bane versus the creature first hit each day, but need to use mythic power to change it – which is kind of odd and does not feel very lawful to me – reliable resource-less functionality would imho make more sense here, but that may just be me. Entangling hit foes with chains via mythic power is pretty decent and combo-ing tripped foes is okay as well – but overall, I wasn’t too thrilled by this guy.

At CR 3/MR 1 Kyton Augurs may sicken foes via crits (or mythic power) and treat their weapons as adamantine – solid. CR 7/MR 3 kytons (with a disturbing artwork that supersedes the page’s layout, looking like the kyton jumps from the page – nice and disturbing layout-choice!) can change charge-directions via chains and are masters of swinging around – with the option to animate them, this makes them much more versatile than one would believe on paper. The new creature herein would be the serpentine

Sakathan (CR 15/MR 6) – essentially, this race was once the royalty of a forgotten prime material plane’s lizardfolk, who dabbled with powers infernal and most dire. Cursed with a kind of vampirism (including blood drain, spawn creation (see new mini-template), these guys get what you’d expect – including a dominating gaze and a powerful regalia: Smart PCs can steal these items and thus cut down the creature’s impressive array of powers (which is btw. supplemented by several sorc-levels gained by the race…). These guys can also counter-scry and come with servants, are particularly deadly with their tridents and have cool, unique weaknesses. And, more so than other new creatures in installments of this series, they leave me somewhat torn: Perhaps it’s the artwork, which is nice, but didn’t grab me. But I’d wager it’s something different -the sakhatan does not feel like a race to me; they feel like an NPC. This is not bad, mind you, but to me, they feel like a lizard king/vampire-hybrid on steroids. That’s cool. But I can’t really see them working on a global scale – in fact, using more than one of these kind of devalues them as a creature. So, whether these guys are for you ultimately depends – they make great villains/NPCs, but I don’t think they make particular good monsters regarding their re-use value. Take that as you will – I won’t penalize this pdf for this, but to me, these guys fell flat when compared to new creatures in previous installments.

Editing and formatting are top-notch – nothing to complain about. Layout adheres to LG’s two-column full-color standard. One should not be remiss and mention the excessive amount of new, full-color artwork provided for most creatures herein. The pdf comes fully bookmarked for your convenience.

Jason Nelson, Alistair Rigg, Todd Stewart – these three gentlemen have crafted anice installment of mythic monsters – in more than one way. The strengths of this book can be summed in a pretty concise manner: Beyond the expanded amount of artwork, the new abilities universally help supplement the intended roles of the creatures contained herein: Hunters become better hunters, scouts better scouts…you get the idea. The thematic consistency is maintained in most cases. At the same time, this book did oscillate in its appeal, at least for me:

After the great new arbiter, I was looking forward to the inevitables, which rank among my favorite outsiders – and was disappointed at a high level. While the escalations are nice, they ultimately failed to inspire me the same way their small brother did. The kytons also fell flat for me – so many cool rules-options and, for the most time, they didn’t do that much for me. At the same time, I really like the arbiter and each of the archon upgrades has something that is simply inspired. Personally, for once, I really don’t like the new creature herein – its flavor (not its rules!) feels pretty bland to me, but that is a personal preference and won’t influence the final verdict.

Essentially, this pdf began as a full-blown 5 star + seal book and then, the builds got a bit less inspired – not bad, but neither as brilliant as those in some other installments herein. The series has spoiled me, clearly. My final verdict will clock in at 4.5 stars, rounded down to 4 for the purpose of this platform.

You can get these mythic monsters here on OBS and here on d20pfsrd.com’s shop!
Endzeitgeist out.