EZG reviews Prestigeous Organizations: The Order of the Nullblades

Prestigeous Organizations: The Order of the Nullblades 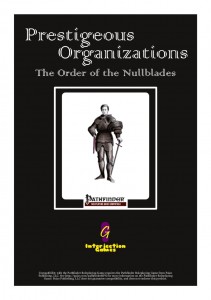 So what are the Nullblades? Essentially, they can be considered an organization fiercely opposed to the MACS-suffering casters – megalomanical arcane caster syndrome that tends too infect just about every high-level spellcaster. You know the drill – the point where the friendly arch-wizard experiments a bit too much and makes the fabric of reality unravel, transforming the town of Bimberton into undead oreo-cookies. And this makes sense in-game to me – there would probably be an organization like this, annoying, harassing and potentially, eliminating spellcasters they deem an issue. The organization and its stance on members, relationships with other classes, buying potions (only from bards and alchemists!), the chance of there being a chapterhouse in a given settlement – 6 possible amenities to be found in a chapterhouse – all of these (and the at times hilarious humor) render the organization a joy to read and highly entertaining. That being said, I’m a bit sad that chapterhouses don’t have an influence on a settlement’s statblock/kingdom building rules-information or prestige-mechanics based benefits – there’s a hierarchy and benefits, why not codify them in the given system?

Oh well, the pdf also features a new 10-level PrC, the Nullblade, which provides full BAB-progression, 1/2 fort-save progression, d10, 2+Int skills per level. The class gets a 15 feet-lead-based aura that hampers concentration (and extends to 30 feet at later levels, increasing its potency throughout the PrC-progression) and become immune to lead-poisoning and more resilient versus diseases and toxins. furthermore, they may detect and identify magic a will and may choose up to 5 techniques (the talents of the class) over the course of their ten levels. A total of 20 techniques are provided for the PrC. These include preventing the teleport of foes, dealing damage to foes that fumble concentration, granting himself temporary SR and even forcing foes to stutter-cast, i.e. only be able to cast the last spell they cast for a round – a bunch of powerful, yet never overpowered abilities here. And, as a capstone, how could it be any other way – antimagic field-generation.

We round off this pdf with two pregenerated NPCs complete with story-hooks, background, appearance and tactics, reaching a neat level of detail one usually only sees in releases by Raging Swan Press. First would be Drimble Underhill, a fighter 6/Nullblade 3 halfling, second would be Cerabiel, an elven bard (arcane duelist)7/bard 2/nullblade 4 – a surprisingly varied and cool build, if I may say so.

Editing and formatting are very good, I didn’t notice glaring glitches. Layout adheres to Interjection Games’ two-column b/w-standard and the pdf comes sans bookmarks, which is a slight bummer. The pdf’s artworks are thematically-fitting stock art.

Bradley Crouch has humor – I’ve rarely enjoyed the subtle (and not so subtle) jibes herein, but rest assured – this is no joke. Indeed, this PrC ranks among the better takes on the innumerable anti-magic archetypes and PrCs I’ve read over the years and the Nullblade, honestly works rather well. The organization makes sense, the NPCs are neat and the PrC does what it sets out to do – make a magic-bane fighter. Now not all is perfect, as mentioned above – kingdom building/prestige/settlement-rules would have been the icing on the cake. Then again, this pdf is FREE. FREE is very hard to beat at this level of quality and thus, my final verdict will clock in at 5 stars.

You can get these magic-hating lead-lovers here on OBS – for FREE!