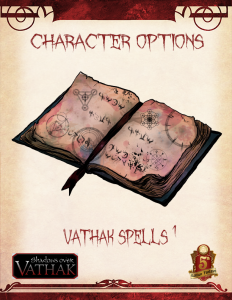 So, the one page of this supplement contains three new spells, each of which does state the core classes for which it is intended. Good!

The first would be a cantrip, bellow of the grave, which is a necrotic damage-based combat spell; it has a relatively short range, is opposed by a Constitution saving throw (so no spell attack required), and its damage output clocks in below e.g. fire bolt; its unique angle is that a save failed by 5 or more causes the target to be frightened. Cantrips are a tight design-space, and this does something solid in the design space. I like it. The damage progression is also in line. The classes for which it is available make sense. No complaints!

The second spell would be the 1st-level hands of the dead, and causes the hands of the deceased to erupt from a 5-ft. square within the 50 ft. range. You get an additional square for every two spell slot levels above first that you use to cast the spell…and there is something interesting here: The grasping hands grapple Medium or smaller targets on a failed Dexterity saving throw, and if you affect at least two squares, Large creatures can be grappled as well. Escape DC is spell save DC, of course. So, a suckier version of entangle? Nope, because this spell has one crucial advantage: It doesn’t need concentration! This makes it a nice tool for low level villains to cover their escape, for example. I have two nitpicks re formatting to complain about: Size categories in 5e are in title case, so the reference to “medium” size should be Medium instead. Secondly, the “At Higher Levels.” Subheader should be both bold and in italics.

The third spell would be howl of the beast, a 3rd-level spell for bards, druids, sorcerers and wizards – class selection makes sense. This spell is interesting, in that it is a kind of fear-based sanctuary: You emit a keening howl, and can maintain it for up to 1 minute, provided you can maintain your concentration; like fear, the opposed saving throw is Wisdom. The radius is an impressive 50 ft. centered on the caster – but there is a crucial difference in comparison with e.g. fear: Enemies are frightened on a failed save, yes, but they do not drop their weapons: Instead, they cannot willingly move towards you, and are compelled to move to the edge of the spell’s area of effect. They can still use ranged weapon or spell attacks to assault you, but attacks are made at disadvantage, and subsequent rounds equal new saves to shake off the howl. Oh, and the effect doesn’t break if you move towards the enemy, but enemies that are cornered can very much hit you with melee attacks as well if you get within reach. This has serious narrative potential…and horror story potential. I like it. It’s the only spell without a neat material component (the other two are fitting!), but that’s just personal aesthetics.

Ismael Alvarez delivers 3 solid spells here; they all have something going for them, and while they are not all brilliant, the narrative potential of howl of the beast does make up for the minor hiccups. All in all a solid little pdf. For a single buck? Yeah, worth taking a look at. 4 stars.

If you found this review to be helpful, please consider leaving a tip via paypal, or joining my patreon here. Thank you!