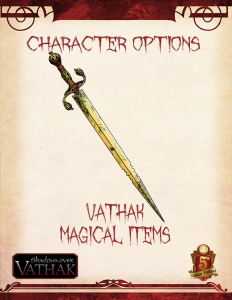 So, this supplement contains 6 magic items, 2 weapons and 4 wondrous items.

Two are classified as uncommon: The first would be the undertaker’s oil, which, when applied to a weapon, makes a regular weapon temporarily capable of hitting undead as though it were magical; Geralt would be proud. 🙂

The ghost ward lantern requires attunement and burns holy water; it glows eerily even when not lit (but sans mechanic effect regarding lighting), and when lit, incorporeal undead must succeed on a save to approach; those incorporeal undead within the 50 ft. radius when lit must succeed on the save or be briefly frightened and unable to enter the radius…but they are already in the radius? Do they have to move to its edge? Not sure. I love the concept, but the execution contradicts itself RAW.

One wondrous item has a weapon-like function for monks:

Gladiator’s blood gloves require attunement, and for good reason: They let you add twice your Strength bonus to unarmed attacks, can grapple a creature one size larger than you, or 2 creatures of “the appropriate size” (should be your size or smaller), and you can initiate a grapple as a bonus action. This can be one hell of a benefit. I wouldn’t allow this item as written in my game, at least not as a rare item; this looks legendary to me.

Longswords of piety are rare and require attunement; the sword is essentially a +1 weapon, and has one charge, which you may expend to automatically succeed at a saving throw; the charge is regained by bathing the sword in holy water while in sunlight. COOL! But…how long? How much holy water is required? Otherwise, I can see rather ridiculous scenarios in daytime warfare. On a cool angle, the sword falls from the wielder’s hands if they seek to harm an innocent, even while under compulsion, and can’t eb wielded by evil creatures. The latter struck me as odd, considering how Vathak tends to promote a more nuanced shades of gray morality than your average 5e-setting.

Swords of pursuit are also rare, require attunement, and are +1 weapons. They have 3 charges and are rather cool: When you hit a target, you can expend a charge to designate the target as someone you track: Until dawn, you gain advantage on checks to track the critter, and at dawn, you can expend another charge to maintain the effect, making this a cool bounty hunter’s/blood hound weapon. Charges replenish at dawn unless you are actively tracking a target. Minor complaint: The pdf confuses query with quarry.

The final item would be the teeth of the dead, a rare wondrous item that lets you 1/day insert them in a corpse to make it speak. A corpse that has been dead for more than a year only speaks its last thoughts, while younger corpses can converse. The teeth must be cleaned with a paste from cremated ash before using them again. See, this is cool. Relevant for narratives, cool, magical-feeling recharge, and yet limited. Really like it.

Ismael Alvarez delivers a mixed bag of magic items here; there are some hiccups herein, but also some neat, if not revolutionary, ideas. As a whole, I consider this to be a good example of a middle-of-the-road pdf; for a buck you can do worse, but I don’t consider this to be a must-have. My final verdict is 3 stars.

You can get this inexpensive pdf here on OBS for just a single buck!