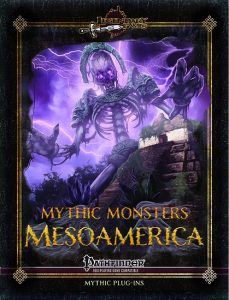 We begin this installment of the Mythic Monsters-series with an unconventional offering – while the couatl has already been covered in Guardians of Good, this installment features the 10-level Plumed Servant-PrC that gets 1/2 BAB-progression and Will-save progression, 2+Int skills per level, 6/10 levels arcane spellcasting progression. Requiring 5 ranks in various skills and 2nd level arcane spells as well as a roleplaying prereq and 2 languages, these casters get an aura of good and a domain at 1st level and every 3 levels thereafter, though these only grant the domain powers. The spells associated with the domains can be learned as arcane spells when leveling up – and yes, this takes level-discrepancies between spell-lists into account. They gain a feather focus as an arcane bonded item in lieu of a divine focus and may use fly for class level minutes as an extraordinary ability. The higher levels provide detect alignment, stern gaze, scaling bonuses versus grapples and poison, elemental speech and may use plumes instead of potions for several items and they may make celestial armors from couatl feathers and skin instead of from gold. The fly-duration of the wings can btw. also be used as a resource to add metamagic to an array of spells. Detect thoughts, ethereal jaunt, timeless body and unlimited flight (coupled with freedom of movement) complement the PrC. Of course, this is MYTHIC monsters, so it should come as no surprise that full-blown mythic variants of the PrC’s tricks have been included…which is nice – overall an okay option with cool flavor, but not a PrC that blew me away.

We are here for something different, right? Yep, the creatures! We begin with a classic: The CR 7/MR 3 Ahuizotl, whose voice mimicry is now supplemented by a fascination-causing illusion that drowns those unhappy enough to subject to it – and also extend its tail to a whopping 30 ft. A solid upgrade. The Cherufe,a t CR 16/MR 6 gets a retributive detonate, may generate ash storms, can throw exploding rocks, cause lava to burst forth by stomping and gets both fiery blood and aura – a great upgrade from the rather uninspired iteration in Bestiary 5 that makes the creature really come into its own!

At low levels, the CR 4/MR 1 chupacabra causes bleed damage and is a superb master of camouflage – and its chupar now causes mythic haste. Nice! The CR 10/MR 4 Guecubu can drag foes hit with it under the earth, burying them – awesome! Oh, and charges from burrowing and an aura of unluck complement another creature that now is a much better representation of the myths associated with it.

CR 21/ MR 8 and thus utterly deadly – the Lusca.Drawing power (and regeneration) from the carnage they inflict, decapitating bites, a mastery of sharks and a mythic-power-upgradeable bleed complement a lethal build. Peuchen get CR 12/MR 5 and may possess animals…and staggers foes that are constricted. With surprising coils, swift action vampiric touch and hypnotic scales, these can be considered, once again, a great upgrade for the base creature. At CR 6/MR 2, the saguaroi can grow additional limbs via mythic power for more slams or find even hidden sources of water – interesting potential ally….but not as cool as the mythic iteration of one of the coolest animals EVER: MYTHIC GIANT MANTIS-SHRIMP. Superb sight, great carapace, iterative pincer attacks (with the option to use mythic power to remove the penalties…) and sonic bursts that accompany their superbly fast strikes (including staggering foes) make this creature…GLORIOUS. And yes, their sight is incredible. Oh, and they get a superb full-color artwork and 3 variants.

The mythic tunche, at CR 21/MR 8 can absorb animals, plants and vermin, instantly killing them and incorporating them into their dread gestalt entity…which also allows them to split into multiple creatures. Oh, and they have a concentration-crippling aura and may use Rise of teh Jungle more than once…OUCH! The option to decrease their required actions for teleports also make them far more deadly than their already cool non-mythic brethren. Even more powerful, the mythic Tzitzimitl clocks in at CR 23/MR 9 and gets a lavish full-page artwork. Great: Eyebeams that combine dispelling, energy drain and damage…brutal. Their deeper darkness causes brutal cold damage, they can convert positive to negative energy and have an ability called apocalyptic harbinger that grants them some serious immunities. I really want to use this beast right now! (And yes, these guys have Sun Eater and Nailed to the Sky…’nuff said.

At the other end of the spectrum, namely at CR 1/MR 1, the xtabay is one of the most disturbing plot creatures I know – and that’s all I’m going to say about them. The base creature is great; the mythic upgrade is also great, also thanks to one of several feats provided in this book to supplement the builds, here Mythic Feel Footfall. The CR 5/MR 2 Zuvembie can force the living to heed their call and can use nature’s exile and power the undead they can animate as with mythic animate dead. Solid, if comparably less remarkable.

We end this pdf with a true legend – Xipe Totec, golden-skinned and clad in flayed skins. In case you didn’t know – this is actually a deity in Aztec mythology, more popularly known as Tezcatlipoca and was the deity of life, death and rebirth. Either a former deity or on the verge of deific ascendancy, this CR 30/MR 10 killer with his flaying criticals, heart eating and the option to infuse creatures with spellcasting capacity, he ranks among the coolest builds in the series AND makes for a superb boss/plot-device…oh, and he’s basically impossible to destroy. His artwork, btw., is absolutely awesome.

Editing and formatting are top-notch, I noticed no grievous glitches. Layout adheres to Legendary Games two-column full color standard. The original pieces of full color art provided are high-quality and awesome. The pdf comes fully bookmarked for your convenience.

Mike Welham and Jason Nelson have crafted a great array of monsters here – while personally, I’m not too blown away by the PrC in the beginning and while a precious few creatures could have used a bit more, as a whole, this is a truly evocative, unique array of adversaries. More important, at least to me as a professed aficionado of Aztec mythology and Mesoamerican folklore, the creatures herein just are infinitely closer to what they ought to be doing. Increasingly, I can observe this series spoiling me horribly regarding monsters – I expect by now that a creature has a couple of unique, flavorful tricks up its sleeve – so much so that the last two bestiaries, from a mechanic point of view, often disappointed me. This pdf’s achievement, then, would lie in actually making these evocative, classic and oh so awesome beings finally live up to their myths. Mythic indeed. 5 stars + seal of approval.

You can get this great collection of mythic threats here on OBS!