The Genius Guide to the Dracomancer

The Genius Guide to the Dracomancer 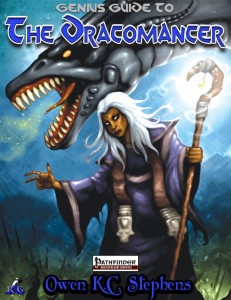 This genius guide clocks in at a massive 36 pages, 1 page front cover, 2 pages of editorial/SRD, leaving us with 33 (!!!) pages of content – ridiculously much, but can it stand up quality-wise to RGG’s usual standard?

After general introduction of what dracomancers are and how they work and interact with a given world, we are introduced to the class. Dracomancers receive 1/2 BAB-progression, all good saves (though the 20th level sports a glitch – fort-save should be +12, not drop-down to +6 from +11), d8 HD, 4+Int mod skills per level, spontaneous spellcasting via cha of arcane spells of up to 6th level, proficiency with simple weapons, light armor and shields. dracomancers draw their spells from the list of both magus and summoner and receive bonus spells depending on the draconic companion chosen, but more on the single most defining class feature later. The bonus spells take the form of a sorcerous bloodline, clerical domain/subdomain or druidic animal or terrain domain, but receives ONLY the spells, not the additional benefits like arcana et al. Got that?

Starting at 2nd level and every 3 levels thereafter (i.e. 5th, 8th etc.), the dracomancer receives a draconic talents with which she can enhance herself – unless I have miscounted, a total of 18 such talents are provided and range from auras of elemental energy to receiving her draconic companion’s form of movement, gaining natural attacks, sharing cha-mods for intimidation purposes, changing energy resistance or sacrificing prepared spells for draconic breath weapon-like effects (or wyvern poison in the case of wyverns) or receiving aforementioned arcana/domain abilities etc. Thankfully, the latter retains progression-standards and has a caveat that prevents gaining abilities before their intended level – nice catch!

Now I’ve mentioned the draconic companion – and chances are, you read this review because you want to know about this dragon-pet-class. At 1st level, a given dracomancer has bonded with a dragon – and, in the time-honored tradition of many a fantasy novel, both life-forces are bonded, tying the dragon’s power to the growth of the dracomancer. The logic-bug becomes immediately obvious – why bond with a feeble human? The reason is obvious – faster power-gain. While the bond between dragon and dracomancer neuters some of their abilities, it is also a fast and convenient way to gain power and increase in size, making it valid not only for self-sacrificing noble dragons, but also for power-hungry evil beasts. I *really* liked this rationale. It makes sense in-game and does not make dragons subject to Mcguffins or other dumb tricks that take away from their threat. Death of both dragon and dracomancer are covered – and yes, the interaction has the potential to spark storylines. (No, you may NOT resurrect my erstwhile master! *evil dragon chuckles as he takes off with your ally’s corpse while screaming “FREE, MUAHAHA!!”*) Additionally, each dragon (or draco-form) has an associated bloodline, domain or subdomain, as mentioned above.

Draconic companions scale from 2 HD up to 16 (also mirrored by the BAB), receive 1/2-save-progression, up to 64 skills, 8 feats, natural armor bonus of 3/4-scaling, up to +7 str/con bonus, up to 6 int/cha-bonus and breath weapon scales up to x9 dice, x5 range…of what? Well breath weapons either have a line or cone as base-shape and each base companion stat that has one, does list it. It should be noted that this table lacks the plusses on BAB, saves, etc. – an obvious glitch that could have easily been caught. The respective attribute increases of the dragon are subject to the player’s choice and draconic companions receive share spells, link, at higher levels evasion etc.

Now how is this balanced? Via the so-called focus. Dragons, even the most beneficent, are not used to fighting with puny little mammals. To avoid a dragon’s intellect and dracomancer clashing, dracomancer must initiate a so-called focus -this can range from a standard action to a free action. Draconic Companions share the initiative of their dracomancer. Without an established focus, a dragon will only spend a single move action and appropriate, non-combat interfering free actions or guards unconscious dracomancers. To establish a focus, a dracomancer has to be within close range of the dragon and the action has to be taken EVERY round. This is the central balancing mechanism of the dracomancer and translates to a simple equation – the more powerful the draconic companion, the higher the action-tax. Note that e.g. the wyvern’s 16th level advancement lowers this to one free action for 2 rounds. The pdf provides a vast array of sample draconic companions that range from dracolisks to void dragons, faerie dragons, drakes etc. – all with different starting stats and two advancement steps – one at 8th level and one at 16th level. A level 2 spell completely eliminates this option for 1/round per level, though, allowing for a kind-of-nova. Personally, I’m not a big fan of this spell, in spite of the dracomancer’s very limited amount of spells known. Not necessarily from a balance point of view, but because it is a vital component of the playing experience of the class.

Now you’re still probably somewhat skeptical about the spell-lists, so let me reiterate one fact – the summoner spells that only affect eidolons have a talent-tax imposed on them – to cast the eidolon-specific buffs on them, the dracomancer needs to spend one of the few talents – which can btw. NOT be increased via feats. It should be noted that Metallic and chromatic dragons are NOT covered in here – you have to get the Genius Guide to the Dragonrider for that.

Conclusion:
editing and formatting are still good, though not as refined as I’m used to by RGG. I guess at one point, this huge class got so work-intense that eyes just glazed over. Still, more glitches than I’m used to. Layout adheres to RGG’s printer-friendly two-column standard and sports several nice pieces of stock art. the pdf comes fully bookmarked for your convenience.

I’ll be honest. I don’t think dragons should be PC-companions. Perhaps it’s due to me never liking Dragonlance and 3.X’s late over-saturation with pseudo-draconians, half-dragons etc. – but I want my dragons as the “OMG, RUN!!!”-apex predators. I’m also pretty sick and tired of the numerous “I receive kind of draconic abilities 111eleven!!”-class features, racial traits etc. What I’m trying to convey is: I’m not the audience of this class. BUT, one of my readers asked and so I took to taking this thing apart, playtesting it – the whole shenanigans.

So consider me a skeptic. This did not improve with the spell-lists, though the limitations worked rather well there. Heck, even the breath weapon has a proper cap, preventing the spamming of it. I’m not 100% sold on the end of a particular implicit cap on unassisted flight, since dracomancer could spend a talent to borrow that from their dragon at 2nd level, when usually the cap is a bit higher. Assisted flight is possible sooner (see the legendary, must-own book “Companions of the Firmament” for a break-down of that AND various takes of flight/aerial combat you’ll probably need when introducing this book) and, depending on your campaign, that might be a problem.

So, how did the dracomancer fare in playtest? Well, I’m not gonna lie – this is a strong class – even with its action-tax (which all but vanishes at higher levels), the draconic companion has the potential to steal the spotlight of quite a few classes, especially at the lowest levels – but that’s an issue that holds true for similar pets of e.g. the summoner, the Kobold Press-shaman etc. and not something I’d punish the pdf for. So, how do I consider this class’s balance over all? Hard to say – it is a powerful pet-class indeed and its impact on a campaign can be “just another class with some damn cool tools” or “utter game-breaker”, very much depending on the style of your campaign. This class is not intended for subdued or low fantasy and definitely something you’d want to limit to a high fantasy game with an appropriate power-level. in such a game, though, it works surprisingly (or rather unsurprisingly – this was made by Owen K.C. Stephens, after all!) well. Can it be broken? Yes, though not in as many ways as an eidolon. Is it for every campaign? No. But does it potentially promote a fun playing experience? after trying it out, I can answer that with “yes.”

Now while I won’t use this class in any low level contexts or low fantasy, gritty games, the achievement of this pdf is not only its mechanics, but its actual justification for why any dragon would agree to the demeaning task of serving mammals. And the pdf keeps the dragon’s alignment, potentially sparking hilarious conflicts between dracomancer and dragon (though the latter can’t act against the dracomancer’s wishes…) -so no, this does not break in-game logic, it does not make dragons wimps and, to be honest, in spite of myself, if I’m honest…I kind of like this pdf. It gave me ideas for organizations, orders etc. and some nice narrative tools. So even if you don’t want players with dragons..what about NPCs? Hehehe…

But I’m rambling. The dracomancer is strong and if you’re using a lot of spell-books, be sure to check these thoroughly before allowing them for the dracomancer. Synergy like that can’t be held against the class either, though. To cut a long ramble short – even though I’m somewhat opposed to the very concept of this class, I have to admit to liking it. If the thought of a draconic companion conjures forth stars in your eyes, if your campaign is rather high powered fantasy – then get this, you’ll love it. For you, this is quite probably a 5 star-file. Those of you preferring things to be more down to earth (ouch, I know, sucky wordplay here), this still has something to offer fluff-wise and re-balancing this class is rather easy – just increase the focus action by one step and suddenly, these guys are much less versatile. For you, even if you hate the very concept, this still can clock in at 3 stars. My final rating will be in-between, at 4 stars; Why not 4.5 – look at that superb bang-for-buck-ratio? Because there quite frankly are a tad bit more minor glitches than I like to see.

You can get this unique, interesting class here on OBS and here on d20pfsrd.com’s shop!

Now excuse me, I have this massive organization to design…