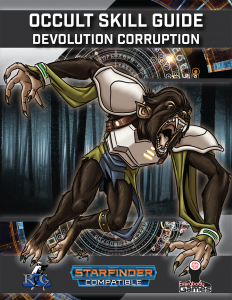 This installment of the Occult Skill Guide-series clocks in at 9 pages, 1 page front cover, 1 page editorial, 2 pages of SRD, leaving us with 5 pages of content,. So let’s take a look!

Before we dive in, some important notes: This pdf features all rules that are required to use Alexander Augunas’ corruption engine, so you’ll need no others. Secondly, while inspired by Pathfinder’s Horror Adventures book, the corruptions presented in this series are not simply copies or conversions of  previously-released material; instead, the engine has been streamlined in many important ways: Especially important here: The engine is designed to account for corruptions that will see the PC in question trying to get rid of them, as before; but at the same time, there also are quite a few that exert a certain temptation, courtesy of the abilities they grant in relation to the drawbacks. In some ways, they behave more successfully like Ravenloft’s classic dark powers checks in their psychological effects than their Pathfinder 1 counterparts. Seeing as how I’ve reviewed quite a few of these corruption-pdfs, I won’t bore either you or me with yet another break-down of the corruption engine and dive straight in.

First of all: What is devolution? It’s a rather pronounced anxiety that occurs only in unnatural contexts; in real life, the ascent of the fear of devolution obviously began with the confirmation of the concept of evolution as a pretty fact, one of the grand psychological insults to the human notion of supremacy in the cosmos. (The others being the end of the geocentric world-view, and Freud’s theory of the psyche.) In short, the knowledge of humanity not being separate from the natural world changed a lot, and anxieties adapt. In medieval times, fear of demons and eternal hellfire was much more prominent, courtesy of the superstitions of that age, and decreased, particularly spectacularly when Freud’s theories were accepted in mainstream scientific context – most people nowadays would agree that having a strange, black-clad man scream into your face in Latin may not necessarily be the best way to treat multiple personality disorder. But I digress. With evolution came a fear of loss of what we have achieved so far, of regressing to a more primitive state, not just regarding our culture, but also our very own biology. This fear was thoroughly debunked, but had several unfortunate  repercussions in pseudo-sciences and theories, but yeah. In a nutshell, devolution is the opposite of evolution, and in many ways, connotated with a regression towards bestial savagery, a loss of mental faculties, a tainting of the bloodline. Both classic horror and pulp feature devolution in a regular manner, echoing the prevalence of this fear in the respective media – Lovecraft’s deep one hybrids, and Pulp-fantasy’s beast-men and half-Neanderthals or a certain Dr.’s island being several prominent examples.

So, does this work in a science-fantasy context? Well, mechanically, devolution has Will as the associated saving throw, and Wisdom as the associated ability score, which should immediately make obvious that there is a chance for a spiraling descent, which is generally something I like to see. As far as the source is concerned, curses, annunaki and potent technology all may be sources of this corruption. The devolution, as contextualized above, is contingent on a distinction between civilized and primitive or savage behavior – and as such, the pdf precisely codifies primitive instincts and behaviors, which can be summed up as reproduction, survival, organization, dominance, feeding and territory…all of which are discussed properly within their respective indulgence, and they are relatively well-codified, though the ardent reader will have noticed that these are quintessential experiences of the condition of being a humanoid…which makes the corruption pretty nasty, particularly since sexual attraction can yield no less than a whopping 4d6 corruption points! If you have this corruption, by all means, stay away from the red light district! Note that the instincts need to be indulged in, and corruption points incurred stack. Interesting: At the latent stage, Diplomacy and Intimidate may be used to once more hammer the tenets of civilization into the target, allowing them to reroll the save. At the latent stage, we have the survival instinct manifestation, which lets you be treated as though you have your level ranks in Perception and Survival, and as though both were class skills; if you already have them, you gain bonuses instead. Additional stages broaden these abilities to other skills of your choice as well – the list obviously omitting “civilized” skills such as Computers or Piloting.

At stage 1, we have the primal body manifestation, which enhances Dexterity or Strength and further improves at higher corruption stages. The manifestation also nets you natural weapons, or enhances them, and proceeds to increase your movement speeds at stage 2, 3 and 4, though the stage 4 progression is called “stage 3” in an obviously typo-glitch that will not cause any confusion. However, at this stage, mental faculties start to decay, and penalties of mental ability scores are incurred. At stage 2, these decrease to barely functional, bestial levels, and skills related to them are penalized as well – though Survival may now actually be better to rehabilitate the character. At stage 3 the corruption points incurred are maximized, mental faculties decay further, but hey, you get low-light vision and blindsense (scent) or (vibrations) (or a decrease of previously existing such senses), or darkvision 60 feet, if you already have low-light vision. Note: The blindsense entries are missing their range here. This may be intentional, considering the hefty drawbacks, though I still would have enjoyed an explicit acknowledgement of this intent. At this stage, the character has turned into an animal, and reason (i.e. Diplomacy or Intimidate) may no longer reach them; the end stage represents full-blown bestial transformation into an animal.

Now, I’ve briefly mentioned The Island of Dr. Moreau before, and indeed, while the story’s theme is more one of evolution, an inverse agent is included here: There is a level 10 poison, the devolution agent, which has its own and pretty swift track towards becoming a bestial version of yourself…

Editing and formatting are very good on a formal and rules-language level, with only two minor nitpicks  provided exceedingly minor inconveniences that should not trip up any GM. Layout adheres to the series’ two-column full-color standard, and the artwork featured is neat. The pdf has no bookmarks, but needs none at this length.

Alexander Augunas touches upon one of my favorite themes in this one; there is something, unironically, primal, about the fear of becoming less than what you are right now, particularly when it comes to mental faculties. I don’t fear death, but I am exceedingly afraid of losing my mental faculties while alive, and devolution, in many ways, touches upon this. From a mechanical perspective, this condition is intended as one that is relatively easy to introduce to slip in and out of, with the risk regarding the manifold triggers and the save (bad save for classes that’d benefit most from it) representing two clever limits that prevent the corruption from ever feeling safe. And that’s what this should be about, right? As an aside: If you own the excellent Star Log.Deluxe: Uplifted Animals and are confident in your designs, I’d splice that into this corruption…just saying… My final verdict will clock in at 5 stars.

You can get this cool corruption here on OBS!

It’s also part of the massive Starfinder bundle – you can find the bundle here!