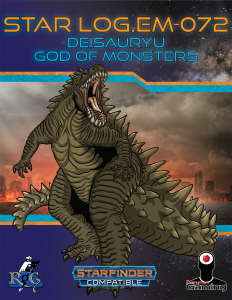 So, first of all, if you haven’t seen this one before, the first page recaps the Supercolossal size category, including the potent “Massive (Ex)” ability, before we take a look at Godzill…äh, I totally mean “Deisauryu.” (As an aside, from a linguistic standpoint, I love how clever this is “Dei” + “saur(us)” + Japanese-sounding ending – most people won’t notice it consciously, but it made me smile!)

Anyhow, this pdf contains not one, but two massive CR 25 statblocks – Godz…äh, I mean: “Deisauryu” and…Mechadeisauryu! 😀  And before you ask – they are two totally different builds, not just a lazy, slapped on template! Both use the combatant array as a baseline.

Deisauryu sports devastating bite + swallow whole, claws + bleed and tail + knockdown attacks, as well as an E & F- damage-causing ranged atomic bolt, with damage types properly noted: Minor nitpick: The bite and claw attacks (but not the tail) lack the +1 granted by the otherwise properly applied magical beast graft. The fellow has fast healing 100 (!!), immunity to ability score damage and drain, death effects, disease, energy drain, fear and fire – with acid, cold and sonic sporting sizable resistances and SR complementing an impressive defensive array. Never fight the fellow in fire – he can designate an energy type every round, and if a resistance or immunity prevents damage, that is healed instead. Oh, and Resolve and a reaction can be used to spontaneously change that. The aforementioned atomic bolts have a vast range, and, obviously, we have a breath weapon as well – this, in contrast to the bolts, not only causes damage, but also some short-lived radiation effects. No action reroll versus save or sucks and a 1/year second life complement a truly fearsome build. Did I mention that he can use bolts or breath weapon as an AoO? Yeah. My advice: RUN. Or board your starship. Oh. Wait. No. Scratch that. Why? There are tier 20 stats for the fellow included as well – even in your starship, he can mess you up! Minor complaint: No mechadeisauryu starship iteration is provided.

Speaking of whom: Where deisauryu focuses on melee as the better attack, the mecha-version is better at ranged combat, and a construct, though one that seems to have elected not to apply the construct graft’s adjustments. We have bleed inducing claws and bites in melee, as well as a defensive array, which, while impressive, is not as potent as that of deisauryu – with laser cannons, missile barrages or plasma bombardment (grenade-like attack) ranged attack options (did I mention the shock harpoon?), he hopefully won’t have to withstand as much damage. Oh, and with multiattack missile barrages, he does have even more damage capabilities. The lack of said feature for creatures of this size makes sense , but oddly, the penalties to atk don’t seem to have been applied to the mechadeisauryu. The missiles can have paralyzing and sleep-inducing payloads as well, and the creature can regain Resolve when resistances or immunities prevent damage – ouch! EAC, KAC and save-names are not bolded properly in this statblock. We also have a pretty cool flavortext included in the pdf.

Editing and formatting are good on a formal level; on a rules-language level, I noticed some minor flaws, but nothing that would compromise the pdf’s integrity. Layout adheres to the series’ two-column full-color standard, and the pdf has no bookmarks, but needs none at this length.

Alexander Augunas’ Godzilla/Deisauryu builds are things of beauty; while I did nitpick a bit here and there, I just can’t help myself – this tugs at my heart’s strings in just the right manner, and I genuinely ended up loving both builds herein. As such, my final verdict as a person, for me, will round up from 4.5 stars, which I also suggest you do if you love Godzilla as much as I do. If you have no soft spot for the King of Monsters, you should probably round down, which my official reviewer’s score will also have to do…but then again, perhaps this pdf, alongside the sheer terror on your player’s faces could change that…

You can get the Starfinder megabundle that also contains this here!

If you value my service to the community, please consider leaving a donation or joining my patreon!