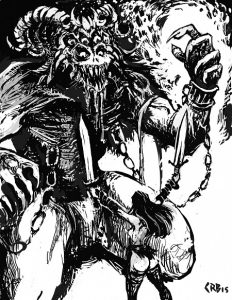 This one-hour game-version of Crimson Dragon Slayer clocks in at 11 pages -all content, no frills.

This review is based on the revised 1.6-version of the pdf.

So what is this? Intended for relative novices to the game, this is a stripped down version of the regular Crimson Dragon Slayer-rules, with a different focus – where the regular version features a goofy, over-the-top and awesome metal attitude, this one emphasizes dark science-fantasy as a default assumed genre. The pdf explains the basics of roleplaying and the system, which is ridiculously easy.

The basis for this is VSD6-system: A roll of 1 is a critical failure, a roll of 2 a failure, a roll of 3 mostly failure, 4 = mostly success, 5 = success and 6= critical success. Unless determining wounds or damage, only the highest number rolled is considered to be the effect: The easier a task is, the more d6 you roll: The default is 2d6 for a decent chance of success; very unlikely tasks can prompt 0d6 rolls, which means: “Roll 2d6, take the worse roll.”

Humans start with 15 health and may reroll a dice pool once per session. Elves have a 2 in 6 chance to resist magic and get 10 starting health. Dwarves make saving throws with 2d6 instead of 1d6 and get 20 health. This system knows 4 classes. Warriors attack at 3d6 (also is used for warrior-style stuff) and get an armor value 4 chain mail and a weapon. Per level, they gain 1d6 health.

Wizards roll wizardly stuff at 3d6, but are at disadvantage stabbing things and doing the martial shtick, rolling only 1d6. They get an armor value-less robe and a wizard weapon (most likely staff or dagger) at first level. They gain 1 health at each additional level. Wizards cannot carry armor or shields while casting spells.

Thieves roll 3d6 for picking pockets, sneaking about, disarming traps…you get the idea. Armed combat is 2d6, fidgeting with magic scrolls and hocus-pocus like that is 1d6. They get leather armor (armor value 2) and a thieves’ weapon. On a level up, they get 1d3 health.

Finally, clerics attack like thieves and may occasionally perform miracles and know the whole religion thing, obviously. They gain 1d3 health per level. The cleric has been amde clearer in his role in the update, so kudos.

The pdf suggests 12 general dispositions like “traitorous”, “noble” or “mysterious” as a first roleplaying impulse.

Okay, initiative is handled as follows: Roll 1d6, lowest goes first. Thieves roll 1d3 (the text explains how this works for noobs – nice!). 0 health is unconscious, negative level+1 health = dead -a 4th level character would die at -5 health, for example. Health regenerates at 1 point per hour. The better the dice pool result, the more damage – attack and damage are rolled into one roll of the bones: 1-3 are misses; a hit at 4 causes 1d6 damage; triple 6s cause a whopping 5d6 damage. And yes, these add up. So a 3d6 attack dice pool providing one 6 (3d6) and 2 4s (1d6) would cause 5d6 damage. Furthermore, 6s are “exploding”, i.e. they are rerolled and added to the total. Armor Value is treated as DR and subtracted from the damage. Shields increase attack value by 2, but decrease the attack dice pool by -1d6.

I mentioned saving throws. A character rolls 1d6. 1 = die horribly, can’t be resurrected, 2= die, 3= die, but get one final action, 4 = alive, but unconscious, 5 =conscious at half total health, 6 = full health. Yes, that means you can actually potentially be healed by save-prompting effects.

The biggest revamp in the update and a very important one, would pertain spellcasting. Magic can be used in combat, but it cannot *directly* harm a living creature – unless blood sacrifice is involved. Casting magic also drains health from the caster, so that’s something to bear in mind as well. Divine magic as wielded by clerics has not similarly been improved, and still does not mention how often and at what potency they can heal, which is odd, particularly considering that magic now drains health.

Characters level up after each session, gaining health. That’s it. Aaaand…that’s the rules.

The pdf also provides a short intro module…and since the following contains SPOILERS, I’d suggest potential players to move to the conclusion.

“The Curse of Xakaar Abbey” takes place in a fully and gorgeously mapped abbey b/w-cartography, and centers around the eponymous Xakaar, a dread sorceror trafficking with things from beyond, enspelling townsfolk to shamble to his abode. 6 basic rumors and copious read aloud text set the stage. The graveyard is an appropriate beginning, as demonic ghouls spewing green slime assault the PCs…who better make a dash if the GM has rolled double sixes (or similarly well) for their total number….but, alas, the lock must be picked…let’s hope the thief doesn’t botch his job. Inside, the PCs will have to get past a massive pit of spikes and then deal with spawn of the Outer Darkness (would be nice to have an inkling of what type of spawn they are, but oh well) that can render PCs into shadowy entities on critical successes. Okay, got that. What are the effects?

The PCs may also broker a deal with a trapped infernal elf and gain a magic sword (+1d6), a healing fountain, benevolent telepathic crystals and then duke it out with Xakaar – who likes enclosing foes in rings of fire and dominate the will of others…and when he dominates more than one, he lessens his attack pool. While the pdf still does not say by how many d6 the dice pool is lessened, I assume 1d6. Still, no idea.

Editing and formatting are very good, no complaints in that regard. Layout adheres to a 2-column b/w-standard; in one version, the background is parchment-style with subdued blood spatters here and there; the other one is even more printer-friendly. The parchment version is huge for a pdf of this size, though. Still, kudos! It should also be noted that the big version is layered and can thus be customized. The pdf has a gorgeous artwork in b/w and features one absolutely fantastic map of the ruined abbey. While I wished there was a version of the map sans key, this pdf is FREE and as such, I’m not complaining.

Venger As’Nas Satanis’ one hour-game version of Crimson Dragon Slayer is extremely easy to grasp, quick to explain and run. For quick, uncomplicated beer-and-pretzels/lunch-break fun, this does its job rather well. The map and artwork and all for free…no complaints there.

So, Vol. 1.6 of CDS’s One-Hour-game rules is better than V.1.11. Let’s get that out of the way. For one, the rules are slightly more precise; health drain for spells makes sense

On a formal level, clerics still require notes on how often and much they can actually heal; wizards now work better within the freeform assumed due to the lack of direct damage, though I am still weary of whether prolonged gaming does not devolve into competitive BSing with the GM – I’d strongly suggest samples of what a wizard can do as an easy, hard, etc. task at a given level to provide at least a modicum of guidance for GMs.

So yes, I still consider the magic rules in need of some finetuning for gaming that lasts longer than one session. I certainly hope that the themes that rendered CDS original and novel will continue to be emphasized in the final book. V.1.6 is an improvement over 1.11 – but not enough of an improvement to justify an upgrade from my final verdict of 4.5 stars, rounded up to 5.

You can get this file for FREE here on OBS!!

The more light-hearted and detailed original version can be found here! (Seriously, I almost died of laughter while running the sample module…)