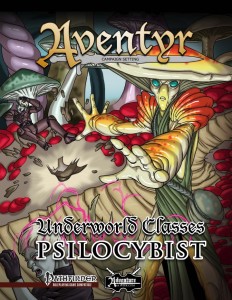 This installment of the Underworld Classes-series clocks in at 23 pages, 1 page front cover, 1 page editorial, 1 page ToC, 1 page SRD, 1 page back cover, leaving us with 18 pages of content, so let’s take a look!

So what is the psilocybist? Well, the first and easiest answer would be: A Prestige Class. To be more precise, one has to be aware of perhaps the coolest domain I’ve read all year, AAW Games’ mushroom domain, as also shown in the Underworld Races: Funglet-pdf. Since I went into detail there, here’s the brief run-down – the domain sports explosive shuriken-style shroom caps, the option to partially transform into a jumping shroom/man hybrid and the means to conjure forth man-eating mushrooms. It is terribly fun and fully represented herein as well, meaning that people who have both pdfs will see some overlap there.

Now Psilocybists expand the exploding shrooms and go balls to the wall crazy with them. The 10-level PrC receives d8, 2+Int skills per level, no new proficiencies, 3/4 BAB-progression, 1/2 Will-progression, 7/10 spellcasting progression and full progression for the purposes of determining the effects of the mushroom domain. Now with a flick of the wrist, these fellows can cause mushrooms of increasing rarity to grow (later even including large ones!), which is a nice synergy with the mushroom domain’s spells (and e.g. Rise of the Drow’s extensive primer on shrooms) – but this component of the class is pretty much cosmetic. At first level, the psilocybist also receives the Trickery (deception) domain and the class also receives the fungal flurry, allowing you to bombard adversaries with the deadly fungal caps. Additionally, psilocybists may consume such caps to enter a psychoactive trance, wherein CL, DCs and checks to overcome SR are enhanced, but at the same time, the psilocybist takes penalties to initiative and select skill checks.

A rather significant glitch between table and abilities has been cleared up.

Now I mentioned imbued caps – these allow the psilocybist to imbue area spells within their caps and throw them as part of the casting. The added flexibility thus gained is further enhanced by one significant bonus – targets hit count as if they had failed their save, though SR still applies. Yes, this is powerful and nasty, but also cool! (Oh, and yes, counterspelling et al is part of the deal.) Over the progression of the PrC, more caps per day, poison resistance, added illusion spells – all possible. At 5th level, these guys may imbue one cap with up to two spells, but only a limited amount of times per day. Here, an ambiguity has been cleaned up as well. 6th level psilocybists may also delay the onset of the effects of their imbued caps. As a capstone, 1/day, the psilocybist may conjure forth dread mushroom golems, the rather nasty CR 10 creature also sported in these pages.

Now if you are not excited about the caps not dealing extra damage on critical hits – well, the solution for that is exactly one feat away.

Editing and formatting are significantly improved in this revised take on the pdf. Layout adheres to AAW Games’ beautiful two-column full-color standard and the pdf sports *A LOT* of gorgeous full color art. Some, you may know from Rise of the Drow/UR: Funglets, but the majority is fresh – kudos for one gorgeous pdf. The pdf also comes with extended bookmarks – kudos for adding full and proper bookmarks!

Mike Myler and Julian Neale’s Psilocybist is downright awesome in concept and makes perhaps the coolest domain I’ve read all year even more awesome by providing a striking, unique specialist pathway for divine casters. Where before, the Psilocybist has been hounded by some unfortunate, glitches and less than comfortable navigation, the revised edition can be considered utterly and completely superior. Not only have several issues been cleaned up, the addition of bookmarks makes for another nice bonus. Now, yes, you may already have the mushroom domain, rendering this a pretty short pdf. Know what? I don’t care. This is a class about guys killing foes by throwing magical mushrooms at them. A shroom-head mystic/ninja. There are not many pdfs that make me cackle with glee to this extent. Read that again. Yeah. I consider this very concept so damn cool, so iconic, I can’t help but love it. These guys are cool and the revised edition with its streamlined content deserves a final verdict of 4.5 stars – whether you round up or not depends on how much bang for your buck you require and whether you value the concept high enough – personally, I will round up. And I’ll be egoistic for once and reflect that in my final verdict.

You can get this cool PrC here on OBS!