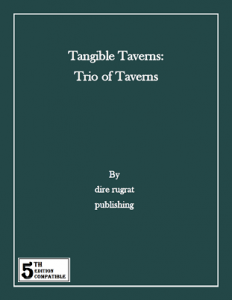 This installment of the Tangible Taverns-series clocks in at 26 pages, 1 page front cover, 1 page editorial/ToC, 1 page SRD, 1 page back cover, 2 pages of advertisement leaving us with 20 pages of content, so let’s take a look!

After a brief introduction, we dive right into the first tavern of the trinity, the Angelic Imp: Dim, yet romantically lit, with red candles and vases of red and white roses, the tavern utilizes a romanticized aesthetic oscillating between the reds of passion (associated with blood and sin) and the purity of white – this is the place to go when you’re looking for a prime spot for a discrete candlelight dinner with excellent accompanying food – from grilled swordfish to saffron-tomato seafood stew and jasmine rice, the food did make my mouth water a bit; while the pdf does not sport menues with sample prices for the dishes, the tavern itself is fully mapped in a player-friendly little, functional map. The angelic imp, as such, has a reputation for privacy and rumors (4 of which are provided in pretty nice detail) are usually something you’d stumble across outside of the establishment. The 6 sample events provided deal with the obviously exquisite and delicate nature of the place; with customers being enraged at the prices of the bill, an artificial wine shortage and love and lust reciprocated or denied, the events fit well within the context of the tavern. Bellamy Brook, the establishment’s owner, receives the full NPC treatment with statblock – including the means to make fast friends, while his striking server Malena is provided as a detailed write-up, including a unique ability that bespeaks her more than impressive grace.  EDIT: A layout glitch has been eliminated.

There is also a love-triangle/jealousy-story waiting in the wings, with Albright Ansuer, son of a self-made man and bored and spoiled aristocratic debutante Jenna Saunderville featuring fluffy write-ups and quite some potential for intriguing scenes. EDIT: Where we had an advertisement before, we now get a new piece of art – kudos!!!

But perhaps the PCs aren’t the biggest fans of romance. Well, then Blackberry Bill’s may be what their looking for – small and cozy, with a focus on pastries and the like, the tavern is run by the eponymous Blackberry Bill…whose pugilism expertise was translated to 5e with rather creative abilities…and yes, they extend to cover the reputation he has a being somewhat short-fused in social environments. I really like how the series translates the spirit of the NPCs to 5e here – this is NOT a hackjob, but a lovingly crafted conversion…so kudos!

The grizzled dwarf is indeed a former adventurer and those stuffed heads on the wall…they’re not hanging there for nothing. Famous for his jams and massive infatuation with blackberries, Bill may not have the best people skills, but his food makes up for that. His waitress, Braybin Mockingson, a speckled and energetic halfling seems to make up for that in energy and impulse. A total of 6 rumors, from tall tales about Bill’s adventuring days to how in fact his blackberry creations reached their level of deliciousness, are provided. Now Bill, obviously, is relying on a secret patch of blackberries and hence, his obsessions with the fruits feature in the sample events: From experimental dishes to the quest for ever more blackberry recipes, thefts, customers bringing a cockatrice into the shop or kids gone missing near the patch…the adventuring potential is there and diverse/creative.

The third of the taverns featured herein would be the Pattering Platypus – and unlike the previous two, this one has an explicitly stated menu that changes by weekday, though it sports no prices. Much like the previous two taverns, the tavern comes with detailed and well-crafted prose depicting the owner, Titus Muldoon as well as Devon Winterhall and a local celebrity bard. Devon, just fyi can make for an interesting bouncer – originally a maneuver master, her background story and occupation have been translated with care to the context of 5e. Kudos!

It should be noted that the food here is pretty much diner fare – with burgers in all but name, delicious fried chicken – and before you start complaining about anachronism here – there are reliable accounts on frying practices in the 17th century and considering that magic and our default setting come closer to the early modern period than the middle ages, I am fine with that. The rumors featured here deal mostly with the NPCs mentioned before and patrons misbehaving; in direct contrast, these are the weakest among the rumors/events herein – they aren’t bad, mind you – just not as diverse.

Now, the pdf also has more people to add to the respective taverns -we have an amethyst-eyed punk-aesthetic gnome sorceress looking for thrills and fun and her gruff, practical and realistic elven friend. EDIT: Where a previous, unique ability had some issues regarding its strength and wording, that has been cleaned up – kudos! I do like her prestidigitation-expertise, though! The gnome’s elven friend is a rather adept hunter and her efficiency when using hunter’s mark etc. is pretty cool.

You can also encounter Dizzy Izzy, disheveled-looking and rather successful mesmerist/conman/information-broker – and my favorite NPC-conversion in the book: Originally a mesmerist in PFRPG, his means to enforce assistance via post-hypnotic suggestions, his gaze and the means to redirect attacks of foes make him a truly cool character.

There is also the charming, intelligent Harding von Orcson, gentlemen trader; you can try to best local legend Pie-eating Pete (fully statted, has a gullet of holding in 5e!) or you may well encounter an eccentric, but harmless pretend-noble. Finally, there is the powerful guard captain Ervyn Blackwall. Ervyn would be my second favorite conversion here – originally a cavalier, he now gets the option to quickly cuff trouble-makers as a bonus action, which fits perfectly with the guard captain trope; however, it should be noted that his mount gets no 5e-stats herein; arguably due to the decreased emphasis on pets/mount stats and their power-growth in 5e, but still something you should know. Ervyn also always a likely source of employment for adventurers or a powerful foil for less scrupulous forces. So yes, adding these beings to taverns (or just scavenging them for other purposes) increases the conflict/adventuring potential for the respective places by quite a bit!

Editing and formatting are tight in both formal criteria and rules-language departments – I have no complaints here. Layout adheres to a printer-friendly two-column b/w-standard and the pdf features b/w-artworks for EVERY SINGLE NPC herein. Unless I am sorely mistaken, I have seen none of these before as well; for the more than fair price point, that is quite a feat and yes, even the fluff-only NPCs/non-combatants have their mugshots. Kudos! The cartography in b/w is nice and does its job well. EDIT: Dire Rugrat Publishing’s crew listens – the pdf now features a page that collects all the tavern maps in player-friendly iterations: Just print it out, cut it up and use it as a handout. There you go! Awesome!

Kelly & Ken Pawlik’s trio of taverns is a supplement well-worth getting; I am also pretty enamored with the 5e-conversions featured herein. Due to a discrepancy in system-age and focus, Pathfinder has a lot of classes and minutiae that does not translate well to 5e; instead of just shrugging and converting the basics, this pdf takes the concepts, distills them to the less rules-intense 5e-context and provides unique signature abilities for the NPCs, making them work in spirit as in PFRPG sans Pathfinder’s complexity. Arguably, to me some of the 5e-characters indeed do their job/theme better than in PFRPG and this is indeed something I love seeing. Similarly, this supplement does not fall in the pitfalls seen in some 5e-conversions…so yeah, kudos indeed!! To me, the 5e-version of this trio of taverns edges the supplement slightly over its brother and, considering how ALL of my previous gripes have been eliminated, this one does now get an upgrade to 5 stars + seal of approval.

You can get these nice tavern here on OBS!