Letters from the Flaming Crab: Here there be (tiny) Dragons

Letters from the Flaming Crab: Here there be (tiny) Dragons 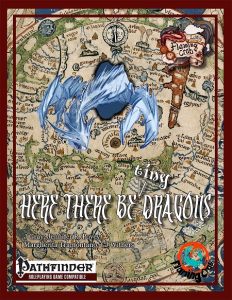 This installment of Flaming Crab Games’ experimental “Letters from the Flaming Crab”-series clocks in at 15 pages, 1 page front cover, 2 pages of SRD, leaving us with 12 pages of content!

Once again, we begin this supplement with a letter from the planes-and world-hopping vessel, kindly salvaged and expanded upon by the team and made available for public consumption by this channel…so what dragons are introduced here?

The first creature we find in these pages would be the CR 3 coral dragon – aquatic dragons somewhat akin to the poisonous coral fishes, capable of squirting forth jets of poisonous acid. And yes, there is a rather gorgeous full-color artwork for the dragon that helps visualize it! Speaking of aquatic dragons – this pdf also features the koi dragon, capable f emitting blinding, scintillating patterns of light from its gorgeous scales…that should teach the half-orc barbarian to try and eat the daimyo’s koi… At the same CR, the packice dragon can attach itself to foes and its breath weapon works differently underwater, which is a nice touch.

At CR 2, the ectoplasmatic pseudodragon can lob globs of entangling, sticky goo at foes and its SPs are pretty cool and thematically appropriate. At the same CR, monarch faerie dragons can emit an euphoria-inducing scent that stuns foes, but also renders them immune versus fear-based effects. Depending on how the cool-down timer is rolled, this one can stunlock foes with sucky Will-saves, which is somewhat problematic, considering that the dragons herein can be taken via Improved Familiar. As a nice service to those playing with the house-rule for Improved Familiars and skill-bonuses, suggestions for those are provided. In case the above has not made that clear, btw. – there are dragons herein that cast psychic spells; both the monarch faerie dragon and the ectoplasmic pseudodragon would fall into this category.

The final new dragon herein would be the rather creative and gorgeous swan dragon at CR 2, who does gain bardic performance instead of the standard array of SPs usually associated with draconic creatures.

The pdf also sports two new archetypes: The bonded oracle gains a mystery familiar, but delays the gaining of the beneficent aspects of her curse by 5 levels. The mystery familiar gained by the bonded oracle gains an additional ability, depending on the mystery chosen – 7 such abilities are provided as samples and they range from gaining the ghost touch special weapon property (not correctly italicized) to the option to 1/day transform into a battle form, becoming Large or granting rerolls versus mind-affecting effects a limited amount of times per day. At 5th level, the character gains Improved Familiar and upgrades her mystery familiar to its dormant potential.

The second archetype would be the tiny dragon tamer witch, who must select a lizard as a familiar, which then proceeds to learn spell-like abilities taken from the witch’s list and the lizard receives the same amount of hit points as the witch, regardless of HD, with 5th level unlocking a transformation of the lizard via Improved Familiar into a tiny dragon form. These benefits consume hex uses. Starting at 8th level, the class gets progressively better form of the dragon transformations with additional benefits for the familiar, but this does cost 3 more hexes. The archetype can select a total of 3 archetype exclusive hexes: One makes targets more vulnerable versus natural attacks and another increases breath weapon DCs – both do not have the 24-hour caveat, and as such are pretty strong, though not necessarily broken…just take heed when using the hex in conjunction with claw/claw/bit-pouncers or classes focused on escalating the amount of natural weapons available. The major hex lets the character bestow casting-related tricks like school specializations and the like temporarily on the draconic pet familiar.

The pdf also sports two archetypes for familiars, which is a cool concept: The intermediary not only has a master, but also a ward and shares an empathetic link with it, with high levels allowing the familiar to target the ward with divinations and healings at long range. Scavenger familiars get a modified class skill list and are particularly adept at scrounging for certain objects or creatures. I like this as a concept – as far as I’m concerned, we can use more familiar archetypes!

We also get new magic items – with a caveat, noting that they should not be available for purchase – which I will take into account for the purpose of this review. The items in question are dragonstones and a total of 5 such stones are provided. Dragonstones require the cooperation of a dragon and another, nondragon intelligent being to properly use. They are “unlocked” by the dragon as a standard action and then, the other character can activate it as a standard action. Dragonstones are scaling magical items, but their potency is not based on the power of the wielder, but rather on the HD of the dragon that sung to unlock it. Dragonstones unlock their basic ability at HD 5 and then unlock progressively better ones every 5 levels thereafter. One gripe I have here is that the item-class does not specify for how long a dragonstone remains “unlocked” – does the wielder have to activate it in the same round? Day? Similarly, their slotless nature makes me wonder whether they are supposed to be fitted into a given magic item or held in a free hand. Clarification here would be in order.

That being said, the stones, effects-wise, are delightfully creative: Anglerfish’s Lure Dragonstones attract fish and make scavenging for food easier, allowing for the catching of even very exotic fish (catch the legendary king of the stream!). SPs and Bardic Harmony, generating air bubbles or flowing light patterns that can grant SR at the highest levels or making layers of ice – while the item class as such requires some more precision regarding its handling, the effects produced, even in the spell-in-a-can effects, manage to feel magical and fun…a pretty big deal as far as I’m concerned.

Editing and formatting is very good; I noticed not a lot of significant formatting hiccups and the rules-language, for the most part, is precise. Layout adheres to Flaming Crab Games’ two-column full-color standard and the pdf contains a surprising array of neat original full-color artwork for the low price point. The pdf comes fully bookmarked for your convenience.

J Gray, Jennifer R. Povey, Margherita Tramontano, CJ Withers – these would be the folk that bring you a cool array of tiny, but definitely not harmless dragons. The very concept implies images of high magics and a certain degree of whimsy and, indeed, the book does manage to instill those concepts. The dragons themselves are solid and the dragonstones, as a concept, similarly are nice. The character archetypes would be this issue’s weak part – while certainly not bad, they vary in probably unintentional ways in potency depending on your campaign and the oracle could have used a full complement of mystery-specific abilities beyond the 7 sample provided. On the plus-side, the familiar archetypes are a great idea for further customization, with the intermediary in particular evoking a significant array of tropes that have been used to great effect in fiction…kudos there. I love the dragonstone concept as well, but ultimately found myself wishing that the rules pertaining their handling and activation had been more precise – while functional in a moderately experienced GM’s hands (and feeling rather magical!), this does decrease their appeal to me slightly.

All of that out of the way, for the low and fair asking price, this book is very much worth getting – in particular if you’re looking to add a taste of the fantastical or whimsical into the gaming world. Younger players in particular will certainly appreciate the inclusion of none-too-threatening/allied dragons as opposed to the armageddon city-leveling engines of destruction my games tend to usually feature. All in all, this is a purchase well worth getting, if one that has a couple of rough edges. My final verdict will hence clock in at 4 stars.

Also: There is currently a charity bundle that contains this one, designed to help J Gray’s family cover their medical bills. It’s a steal, contains a lot of great material and you can get it here!
Endzeitgeist out.