Islands of Plunder: Raid on the Emperor’s Hand

Islands of Plunder: Raid on the Emperor’s Hand 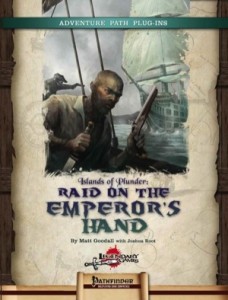 Wait, before we go into the details – what is this series about? Well, essentially, the Islands of Plunder-sub-series is a part of expansions intended for the Skull & Shackles AP, providing sidetreks etc. on an island per island base – they can essentially be considered island-focused mini-adventures that work just as well within the context of a Freeport campaign, Razor Coast or Savage Tide – if it’s remotely pirate/island-themed, these will work – and probably beyond that, but that I’ll take a look at on a case by case basis. This island of plunder is intended for 8th level PCs, which render it appropriate for just about every pirate-themed campaign

Captain Alban Thekros is back from a lucrative trade-run to the South -he’s been drinking heavily, and, to be honest, he’s not used to steering vessels of the size of the Emperor’s Hand. Subsequently, he ran the massive ship aground a sandbank. While fortunately, the ship was damaged to sinking conditions, but the warship escort ships were not signaled and thus, sailed on. Now, things become interesting -the PCs have a massive treasure trove right before their noses – but they will have to hurry!

The massive Emperor’s Hand is fully mapped and in order to take their spoils, the PCs will have to defeat the vessel’s crew – and then it’s looting like there is no tomorrow! The big issue becomes soon apparent – if the PCs are to try their hand at ransacking the boat, they better hurry: In order to win here, speed is the key – hence, this module uses a massively detailed ransacking mechanic to count points. This includes using extradimensional storage, creatures, etc. and on the combat-side, troop subtype adversaries and cool archetype’d, versatile builds for the NPCs to make the whole thing more interesting as well. Have I mentioned that the vessel has 6 (!!!) levels, fully mapped? This massive caper has all the makings of a cool heist indeed and sports easy ways for the PCs to actually come up with ways to efficiently plunder! Better yet, a DM can easily think about ways to make the misfortune of the Emperor’s Hand the work of the PCs for a full-blown heist module!

Editing and formatting are top-notch, I noticed no significant glitches, though e.g. one reference to the “King’s Hand” instead of the “Emperor’s Hand” could be consider a slight confusion-causing blunder. Layout adheres to a drop-dead gorgeous 2-column full-color standard and the pdf comes fully bookmarked for your convenience. Each named NPC receives his/her own artwork, which is awesome. Even better, both island and fortress come in lavishly drawn full color maps that also sport player-friendly maps to use as handouts – kudos to the cartographer! The pdf comes fully bookmarked for your convenience.

Matt Goodall and Joshua Root have created one fast-paced, highly uncommon sidetrek – the looming return of the escort, the high-adrenaline escape, the unconventional focus of this sidetrek -all of these conspire to make this module fun and uncommon, eliciting a nice sense of jamais-vu. This Island of Plunder is very uncommon, fun and just exciting – well worth a final verdict of 5 stars + seal of approval.

You can get this interesting sidetrek here on OBS and here on d20pfsrd.com’s shop!