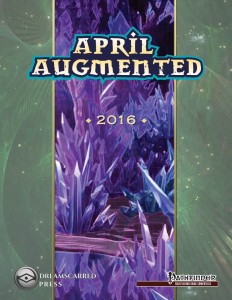 This Pay What You Want April’s Fool-release clocks in at 15 pages, 1 page front cover, 1 page editorial, 1 page SRD, 1 page advertisement, leaving us with 11 pages of content, so let’s take a look!

The first new archetype herein would be for the currently-in-playtest discipline-using class, Medi…and it’s called Ambu-Lancer. These guys get Ride as a class skill and a mount with light armor proficiency at first level. When riding said mount, the ambu-lancer takes no armor check penalty to Ride skills and killed mounts can be replaced sans cost after just 1 week, analogue to the cavalier. Medic’s expertise is replaced with Mounted Combat and in an interesting twist, maneuvers that have a movement component may be used with the mount’s movement instead of the ambu-lancer’s – basically, it replaces the animal companion’s usual share spells with discipline-related movement sharing. Similarly, the triage ability may be used in conjunction with the mount’s movement.

Absolutely hilarious: At 4th level, instead of +1 triage use, the archetype gets a Stealth-WRECKING minus 30 Stealth when activated siren that grants Improved Overrun when attempting to move somewhere to use triage – MEDIC!!! XD Instead of 5th level’s medic’s expertise, the archetype may drag allies healed atop the mount! Pretty cool archetype…and hilarious.

The Edge Lord harbinger had me laugh so hard, I had to stop and go outside for a second – the archetype gets proficiency with simple and martial weapons and the katana, but not with any armor or shield. Discipline-wise, they replace Riven hourglass and Scarlet Throne with Unquiet Grave and Mithral Current. At 1st level, the archetype gets Quick Draw and dons a leather coat of black or red leather that provides Int-bonus to AC (+1 dodge bonus at 3rd level and every 5 levels thereafter) – this ability replaces accursed will and is called…”Become So Numb.” Starting at 4th level, the edge-lord may teleport a limited amount of times per encounter before or after initiating a strike. This is called “One Step Closer.” Come on, now you’ve got it, right? It’s friggin’ Linkin Park-the-class. XD Instead of elusive shadow, the archetype gets immunity to emotion effects and replaces sorcerous deception with Mixed Combat and Weapon Focus – X-Ecutioner Style. If you didn’t grow up with these, you may not consider this as funny as I do…but boy…I could throw myself away right now…Increased crit range via Papercuts and the option to teleport crited foes unwillingly complement this very well – basically, if you ever wanted to play Dante or Vergil from Devil may Cry…yeah, that’s a pretty good way to do that. Two thumbs up!

The Madman monk may not use class features with monk weapons, only with unarmed strikes. This archetype…is basically an exercise in how M-A-D you can make an archetype – all saves are governed by two attributes: Str and Con for Fort, Dex and Int for Ref, Wis and Cha for Will. For the lulz, his unarmed strike attacks use Int and Str to atk, but Con and Cha to damage rolls. And no, this cannot be changed. They deal bludgeoning, piercing and slashing damage at once via unarmed attacks. Dex-based skills are enhanced by Str. Cha-based skills are enhanced by Wis. The MADman may substitute psychoses for attacks in his flurry, with save DC being equal to 10 + 1/2 class level + highest attribute modifier + lowest attribute modifier. In case you haven’t got that yet – no, you can’t choose anywhere and yes, negative modifier decrease the efficiency. So what’s a psychoses? Well, it’s basically the talent array of these fellows. They get one new psychosis at each odd level, with later levels unlocking new ones. Now here’s the mechanically interesting component: The more successful psychoses (success/failure-conditions provided individually), attack and maneuvers the madman has performed before in a given flurry, the more potent becomes the specific effect. And yes, these include reality-bending stunts like flying (for as long as the flurry persists…). Also interesting – high level psychoses have powerful effects – when executed AFTER 5 successful prior attacks…otherwise, they have no effects. And yes, the archetype does have multiple capstones to choose from. This whole archetype is basically a meta-joke on the monk…and it still kinda works. While perhaps the least serious-feeling component herein, the archetype sports several impressive and cool ideas. with the psychoses and flurry-combo-idea in particular being worthy of closer examination.

Next up would be the Daring Hero 10-level PrC, which sports Elan’s (The OotS-character, not the race) Razor Wit as a prerequisite bonus feat. The PrC grants d10 HD, 6+Int skills per level, 1/2 Ref- and Will-save progression and full BAB-progression. Every even level, the PrC provides +1 maneuver known, chosen from Mithral Current, Scarlet Throne and two previously available disciplines, chosen upon taking the PrC. PrC-levels count as full initiator levels and 3rd level and every 3 thereafter add +1 readied maneuver. 4th, 6th and 10th level provide +1 stance. The PrC allows the character to substitute Charisma as initiation modifier for all mental attribute modifiers for all class features and maneuvers – which is pretty OP. Additionally, this enhances Razor Wit and provides benefits for soulknives. Dramatic Entries, better starting reputation…okay. Using counters sans expending immediate actions 1/encounter at 3rd level, +1/encounter every 3 levels thereafter, is pretty powerful. At higher levels, the plot armor stance can be used and these guys get gold for the fanfiction written about the. As a capstone, the hero can’t die anymore…unless it’s fittingly climactic.

Next up would be the Drowmedary-race,a combination of drow and gamla – these folks get a full age, height and weight-table (with a minor grey-line-formatting glitch) and are humanoids with the elf and akashic subtypes. They have normal speed, +2 Con and Cha, -2 Dex, get +1 bonus essence and get poison spit that scales with the levels – usable 1/minute, range 10 ft. The spit can stagger foes and even knock them unconscious and essence can be invested in it as though the ability were a veil – essence invested increases reach and DC. Personally, I think the DC-increase is a bit excessive here – in my game, I’d rather increase the reach-increase from 5 ft. per essence invested to +10 ft. Also, since the alternate, difficult-terrain-causing class feature that spits webs instead is rather outclassed by this one. Drowmedary also get a teamwork bonus feat they can share for Cha-mod rounds with all allied drowmedaries within 60 ft.. See, this is one of the abilities that looks fine in a general adventuring group – but when all players play the race, it gets ridiculous fast. I’d strongly advise in favor of a daily limit or similar factor to prevent this getting out of hand. Instead of this, they can also get climb speed via spidery legs.

The pdf has one more thing to offer, namely the gelatinous cube monster class – HD d8, -4 Dex, +4 Con; Ooze type, speed 15 ft., acid immunity. The cube is considered intelligent, blind, has blindsight, can’t be tripped and gets 2+Int skills per level. They get a slam attack and transparency at 1st level. Their class spans 4 levels, has all bad saves, 3/4 BAB-prgression and nets +4 Con on every level but the 1st, but also -2 Dex per level. Paralysis potency increases every level, 3rd provides +1d6 acid damage and 4th level nets size-increase to large as well as engulf. The write-up also sports two racial feats – one that nets you a pseudopod and a second feats allows the cube to assume humanoid form. If you really want to go cubey, I’d also suggest checking out Rite Publishing’s “In the Company of Gelatinous Cubes“, their April-product last year.

Editing and formatting are good on a formal level, very good on a rules level – the wordings are generally tight, though some minor glitches can be seen here and there. Layout adheres to Dreamscarred Press’ full-color two-column standard and the pdf has no artworks. It does, however, have bookmarks and it comes with a second, more printer-friendly version.

Anthony S. Altovilla, Forrest Heck, Jacob Karpel, Jade Ripley, Jeffrey Swank and Kevin Ryan provide some hilarious options here – with a wink, sure…but functional nonetheless! While I am not sold on each and every design decision, I do love a lot of the components herein – the Edge Lord made me laugh so hard and the drowmedary are similarly fun. (2 cents if you play one dual-wielding scimitars…) Yeah, yeah, endy has to complain about blabla… but guess what? I don’t want to. This is a pay what you want product that offers significantly more great ideas than many commercial releases. Sure, I don’t consider all perfect – but you can literally take a look and then tip the authors…and seriously, you should. The material is worth it, particularly for Path of War-fans, for whom the majority of content herein is intended. This may not be perfect in formal criteria or balance-wise, but it’s fun and there is no component herein that will truly break anyone’s game. Taking that and the PWYW-aspect into account, I arrive at a final verdict of 5 stars.

You can get April Augmented here for any price you want!

If you want to have a say in future Dreamscarred Press releases and support them, well you can do so here on their patreon!
Endzeitgeist out.