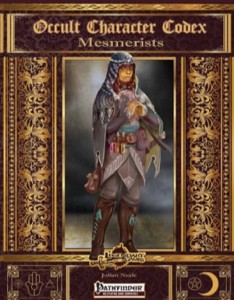 So how were they made? Well, for one, the builds use Pathfinder Unchained’s automatic bonus progression, which means that the characters have a better chance to stand against the PCs sans flooding the campaign with magic items – a decision I very much welcome. The builds are not made to be sheer exercises in powergaming superiority that exist in a vacuum, instead championing the approach of making viable characters, complete with a brief personality sketch, though that component is less pronounced than in Purple Duck Games’ codices. Options and buffs are included in the statblocks, though handy pre-buff sections provide the information sans them, should your PCs be able to catch the character unaware.

Beyond that, advice on using the characters in combat and class-specific peculiarities are covered as well. The design philosophy, in spite of the relatively brief fluff texts for the characters, is that you have living characters, not an exercise in min-maxing – while efficient at their given tasks and roles, the NPCs in this book ultimately are supposed to feel like they are more than an engine of fine-tuned destruction, sporting e.g. skills that can be used in contexts beyond combat. Long-duration spells are included in the respective statblock, though they also feature lines that provide the stats sans buff-suites. It should be noted that the tactics-section before and during combat is pretty detailed in this book, making the spontaneous handling of the mesmerists in this book slightly easier. A brief guideline regarding the handling of mesmerists is part of the deal before we dive right into the statblocks themselves.

So, we have a massive book of mesmerists spanning the whole range of levels – from level 1 – 20. As far as archetypes are concerned, we get Cult Leaders and Spirit Walkers (the latter in one of the builds multiclassed with 1 fighter level), but no Toxiticians or Vexing Daredevils. (And no, Occult realms’ Umbral Mesmerist neither…) On the plus-side, the racial selection this time around is interesting, to say the least: The wonderfully fitting nagaji and kitsune races are represented herein alongside changelings and yes, doppelgängers – the three doppelgänger statblocks are assumed to be part of a doppelgänger conspiracy and represent leaders at different stages of their cabal. Interesting here: While they share some spells in common as a kind of leitmotif, the lists still are diverse and exhibit different foci, a practice that also extend to feat selection -while at first glance, doppelgänger mesmerists wielding greatswords of various potency *look* similar, even a casual glimpse at the respective feats shows that they employ different tactics and play differently as adversaries. Similarly, spell-lists of the characters that may seem familiar have been tweaked in a lot of subtle nuances that end up creating remarkably different experiences.

Editing and formatting are top-notch, I noticed no significant glitches. Layout adheres to a beautiful, two-column full-color standard and the pdf sports several beautiful pieces of full-color artwork, some old, some new. The pdf comes fully bookmarked for your convenience.

Julian Neale’s collection of mesmerists is diverse, interesting and sports quite an array of truly distinct, unique builds. While, like in the first book, the flavor-text is pretty minimalistic, the builds themselves are varied and interesting. Granted, I would have loved to see the other archetypes covered as well, but that is me being a spoiled bastard reviewer from hell. In the end, these mesmerists are solid, fun and work well – the statblocks I took apart sported no glitches, which is also a feat worth mentioning. In the end, my final verdict will clock in at 5 stars.

You can get these mesmerist stats here on OBS and here on d20pfsrd.com’s shop!
Endzeitgeist out.