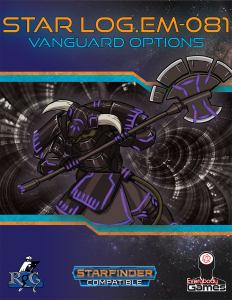 On the introduction page, we receive a brief contextualization of the vanguard class in the context of the Xa-Osoro system before diving into the nit and grit of the supplement.

We begin with an alternate class feature for vanguards, warrior’s insight (1st level), which replaces the aspect insights attained at 1st and 8th level: At first level, you gain a feat (Bodyguard, Cleave, Coordinated Shot, Deadly Aim, Improved Unarmed Strike, Kip-Up or Multi-Weapon Fighting), while at 8th level, you gain a related feat boost or gear boost, based on the feat chosen at first level. As you can glean, this is somewhat closer to a more martial vanguard.

The pdf then proceeds to provide an array of 4 different aspects: Emergence is all about teamwork and being part of a system that is greater than the sum of its parts; as such, we have Improved Combat Maneuver (Trip) and an insight bonus to Diplomacy as aspect insight, 1/combat (still prefer concrete durations) with a significant enemy the option to regain an Entropy Point sans action when hitting an enemy adjacent to an ally, AoE bludgeoning damage that is increased when adjacent to an ally, and an ally-based damage boost for entropic strike. Interesting.

Stasis is interesting, in that its embodiment rewards you for not taking you entire options contingent, and the catalyst allows for AoE fatigued, while the finale entangles creatures when you use mitigate. This aspect is design-wise very interesting and offers a rather distinct playing experience. Like it. Senescence nets you 1/combat an Entropy Point when taking ability score damage or drain to a physical ability score, and its AoE catalyst nets you low-range ability score drain, with the finale allowing for massive Entropy Point expenditure for a combo of entropic strike with said aspect catalyst.

Transference nets you Entropy when you succeed on a save, and its aspect catalyst lets you decrease the durations/end spell effects on enemies – cool! The finale lets you share conditions with enemies that caused them – and thankfully, this catches some of the nastier ones, so no cheesing. The duration is btw. contingent on Entropy Point expenditure.

We also have an array of new disciplines: for 2nd level, we have 4, the first of which would be Accelerate Entropy: 1/round reduce current HP and Stamina by entropic strike damage to generate 1 Entropy Point per damage die rolled, which lasts until the start of the next turn. This loss cannot be negated/cheesed. Blade Block does what it says on the tin: Reaction + Reflex saves to halve kinetic melee damage. Half-swording lets your one-handed entropic strike benefit from the penetrating weapon special property, or do so at an increased level—essentially a reason to go one-handed. Star’s Entropy lets you deliver entropic strikes via solarian weapon crystals, gaining the crystal’s critical effect. You also get to choose to deal acid, bludgeoning, or the crystal’s damage bonus when using entropic strikes, but the attacks are not treated as solar weapons, and effects applied to solarian weapon crystals do not apply. Good catch there!

For 6th level, we have 3 new disciplines: Defensive Posture requires Blade Block or Flatten Bullets, and lets you combo mitigate with them. Cool! Entropic Raider nets Spring Attack, and when using it as a full action, you gain 1 Entropy Point (here erroneously called Entropic Point). Fierce Knight requires Entropy Shield and allows you to treat it like a knight’s shield, with 8th, 13th and 18th level providing upgrades.

Finally, we have 3 10th level disciplines: Grasp Blade builds on Blade Block: If you succeed on the save, you can spend an additional Entropy Point for a disarm maneuver. Neat combo! Hasten the End lets you spend 1 Entropy Point as a reaction when you full attack to gain the benefits of haste until the end of your turn. Herd Immunity…is very important, and we all…sorry, slipped there. In the context of the game, when you succeed a saving throw against a poison or disease, all allied creatures within 30 ft. gain an untyped +4 bonus to the next save against the disease or poison, as though treated with Medicine. This one requires Curative Deconstruction to take.

Editing and formatting are very good, I noticed no serious snafus on a formal or rules-language level. Layout adheres to the series’ two-column full-color standard with a nice artwork by Jacob Blackmon. The pdf has no bookmarks, but needs none.

Sasha Laranoa Harving delivers an interesting expansion for the vanguard class here; the power-level of the new options falls within the paradigms established by the class. Senescence’s 2d3 ability score drain, particularly in the Improved version, which extends this to all 3 physical ability scores, seems brutal at first glance, but the classes most hampered by the low-range effect are those with a good Fortitude save, so I consider this to be within the functional framework. Personally, I think that the bonus type of Herd Immunity should be typed, but apart from very minor niggles, I found myself genuinely appreciating and enjoying this expansion for the class. 5 stars.

Everybody Games is making a rather awesome RPG—Eversaga! you can support them here on patreon!

If you enjoy my reviews, please consider leaving a tip via paypal, or joining my patreon here. Thank you.