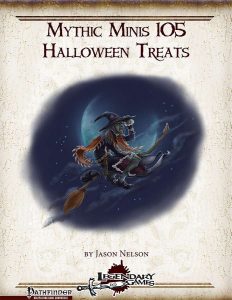 This installment of the Mythic Minis-series clocks in at 4 pages, 1 page front cover, 1 page SRD, leaving us with 2 pages of content, so let’s take a look!

Okay, we begin with two new mythic feats, which may both also be used as tier 1st abilities for the stranger, guardian and trickster paths:

Headless Horseman: Expend 1 use of mythic power as a swift action to make your head invisible and partially incorporeal for mythic tier minutes; you can still speak, see, eat, drink and get +2 to saves versus inhaled gas and poison as well as +2 to Intimidate and have a 25% chance to ignore critical hits and precision damage. Here is a minor type: “to ignore extra damage from a critical hit, sneak attack or precision based.” – I’m pretty certain that the word “source” is missing at the end of the sentence, though that does not impede the usefulness of the feat. Additionally, while “headless”, you are affected as though by hide from undead.

The second feat is called Ghost Rider and builds on Headless Horsemen, allowing you to depict a jack-o’-lantern-style head instead and nets you control over the type of weird “head” you display. It also nets you low-light vision and further enhances the bonuses. You may also go ghostly disguise, leaving no tracks. Additionally, for 2 uses of mythic power, you can enhance your mount as though it were a phantom steed, at CL = character level +5; finally, you may reduce duration by a minute when running/withdrawing to turn yourself and your mount incorporeal until the begin of your next turn. Both feats have in common that dismounting ends the effects.

The second part of the pdf contains 4 detailed magic items, all with prices and construction requirements properly noted. The first would be the Ghostly Gossamer…which is basically…aspooky ghost sheet. You know, the “Ghost costume” most of us will have used at one point…only it actually works as ghostly disguise and its duration per day may be decreases to get miss chances generated by ghostly specters. Mythic characters obviously gain further benefits from it, namely ghost touch armor and the ability to expend mythic power to actually become incorporeal! Really cool!

The goblin mask helps with a ragged, comical illusion that allows for reduce person size decreases. While in effect, this enhances Bluff and steal maneuvers as well as feinting. Additionally, non-evil creatures have a hard time attacking the wearer. The DC to resist this properly codified effect can be increased by mythic wearers with mythic power, using surge die or to bypass immunity to mind-affecting effects. Cool: While reduced in size, the wearer may change the effects of the mask from “adoring” to “OMG, run”-levels of horrific, much in accordance with PFRPG’s delightfully wicked goblins. This also changes the bonuses to focus on Intimidate and dirty tricks and also the effect of the harmless guide. Really cool two-phase item…and mythic wearers get more control over shifting item modes and when the respective boosts are available…and it adds a buff to the wearer when foes fall prey to the mask’s attack-preventing effects. Two thumbs up!!

The sack of gluttony is twisted: It contains sweets that act as beguiling gifts and eating a single sweet from it sends the consumer into a spiral of gorging itself, requiring no less than 3 consecutive, successful saves, with stomach cramps following potentially right after the effect. Mythic users can enhance the DC via surge die (first AND consecutive saves!) and non-mythic targets may suffer from the effect of feast of ashes for days after such a binge. The sack, however, may also be used for beneficial purposes, allowing the wearer to use mythic power to create candy versions of objects placed within, duplicating allfood or alternatively, transform elixirs and potions into candy with the same effects. Cool!

The final item herein would be the legendary witch’s broom, a broom of flying that can be bonded only by a mythic creature being part of a coven or capable of using hexes. It may be ridden by the witch or her familiar and either may not be dismounted from the broom; while not truly sentient, the broom attempts to take paralyzed, stunned, etc. riders into cover/concealment etc. at the rider’s will. Familiars riding the broom with their master gain cover and immunity to non-mythic hexes, curses and fear-effects. The pair also gets greater familiar link, as the archmage ability, while riding the broom. While mounted, the character may roll her surge die twice, taking the better result, when using it to enhance CL casting a witch spell, using spell-trigger/completion items or making saves versus hexes, curses or witch spells. Additionally, when casting a witch spell or using a hex, the witch may use a mythic power to gain a variety of archmage tricks. The broom has two uses of legendary power and 2 active abilities: Evasion or improved evasion while riding the broom or (augmented) mythic fly. It has a hardness of 10, 30 hp and is immune to sundering from non-mythic targets.

Editing and formatting are very good, I noticed no serious glitches. Layout adheres to legendary Games’ two-column full-color standard and the pdf has a nice full-color artwork. The pdf has no bookmarks, but needs none at this length.

Jason Nelson’s supplemental pdf of Halloween-themed mythic tricks is not only amazing during the season: Each of the items herein is strong enough to carry a whole plot/investigation, featuring several cool, complex tricks. The feats are evocative as well…and the pdf gets the fascinating duality of Halloween as something both creepy and enjoyable, mirroring this flavor in the design-paradigm employed. I loved each and every aspect herein, and can see myself using them all, regardless of context. Hence, my final verdict will clock in at 5 stars + seal of approval. Very much recommended, even beyond the spooky season!

You can get this great mythic mini here on OBS!