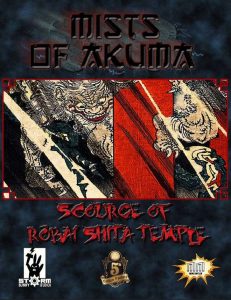 This adventure for the Mists of Akuma-setting clocks in at 50 pages, 1 page front cover, 1 page editorial/ToC, 1 page SRD, 2 pages of advertisement, 1 page back cover, leaving us with 44 pages of content, so let’s take a look!

Okay, as always with these modules, you don’t necessarily *need* Mists of Akuma to run them – all necessary information is provided, though personally, I definitely recommend them within the context of their setting. In this book, we get the stats for the Adeddo-oni. As far as other stats are concerned, we get two wielders of portable cannons, a powerful cursed shikome (hobgoblin, armor covered in prayer slips, who can broadcast radio waves and comes with notes on the Kodoma-Tachi chapter!) and more. As an aside: I have no idea what a leap speed is supposed to be – and the hobgoblin write up doesn’t specify. On the plus-side, we get 4 new tsukumogami, and the Fukō oni, who comes in two iterations. Once more, we also get a pretty potent legendary item, which. Once more, is sentient…and potentially thus rather troublesome. All in all, quite a bunch of new material!

All right, only GMs around? Great! Once more the powers-that-be recruit the PCs via a missive found in an unlikely place; with autumn in the air, the PCs must travel to Kyusokuna, and there, find Hanashichū Grove – preferably without running afoul of the local taboos regarding tech. To reach the grove, the PCs will have to cross a massive suspension bridge, where they will, of course, have to deal with rather potent adversaries (serviceable map included) – and they should better not tary. Becoming lost or falling off the bridge may end up being late…something that is rather frowned upon in Soburin. (As a German, I can relate…)

Once they have arrived at the designated spot for their clandestine meeting, the PCs met the nature-wielder, here on behalf of Lord Sukochi. The task sounds simple: End the troubles at Shibai. It’s not. All the monks of the titular temple have been found dead or missing, and an oni is haunting the village. The famous, cannon-wielding Mubō Brothers have been hired to deal with the issue, but they are deemed to be heretics and too incompetent to solve the issue. The PCs also hear that the settlement was founded by a potent wu-jen and yamabushi, and is considered to be a safe haven from the feared mists of akuma – loss of the area is not acceptable. (As an aside, yes, we do get random encounter suggestions.)

Once the PCs arrive at Shibai, they walk into chaos – a full-blown adeddo-oni attack must be thwarted, which is also the first chance to interact with the rather unpleasant cannon-wielders. Once the chaos has been subdued, the PCs will have a chance to start to loathe the brothers before talking to the mayor, who, after being initially dismissive, warms considerably to them once the PCs flaunt their mission. The fully mapped settlement is at the slope of a steep hill, with heights noted on the map – kudos! The mayor tells the PCs over tea (somewhat of a lost chance for Culture-checks…) about the situation – and indeed, the constant monster assaults represent a ticking timer…the PCs should better hurry!

Ultimately, they will have to investigate Róbai Shita temple – and worse, the brothers will try to smear their names when they set out for the temple. Speaking of temple: The place is fully mapped (2 levels) and, while the maps sport no scale, it is easy enough to assume the default 5-ft.-grid. The maps are rather detailed and can be cut up and used as hand-outs, which is a big plus. Somewhat odd, though: The ground floor of the temple has the functions of rooms noted, while the basement is wholly spoiler-free. Just an observation, mind you – I’m good with the presentation. While the exploration of the temple requires a bit of GM panache (in the absence of room-by-room-read-aloud text), the exploration should elicit a bit of creepiness nonetheless…and upon their return from the temple, the brothers will attack, trying to secure their spot as top dog problem solvers.

The battle will rage, but before one side can claim a decisive victory, the monstrous ukō intercedes with a whole array of deadly creatures in tow. In the chaos, the brothers should manage to get away…and even if bested, the monster seems likely to return. Thus begins a bit of an investigation, which comes in two difficulties – simple and hard; the added difficulty version in particular is something I’d recommend to add a further sense of urgency to the investigation; turns out that an ambitious couple has taken the yūrei-fū wind chimes from the depths of the temple – and, well, they are not necessarily going to just give up on them or their ambitions….and the brothers may pose further issues.

In order to stop the troubles that have beset the village, the PCs will have to venture down into Róbai Shita’s dungeon, which is as much dungeon as it is a colossal accumulation of tsukumogamis! Once more, we get basic room descriptions (no read-aloud text) as the PCs venture through the dungeon to the catacombs. (Once more, the dungeon has room names included, while the catacombs don’t; once more, the maps are pretty detailed and scale-less, but perfectly usable). Placing the wind chimes back where they belong will have the PCs duke it out with the undying monster once more – if they succeed, they’ll have saved the town, hopefully with proof regarding the plot behind the wind chimes and their theft!

It should be noted that the pdf does come with a handy 1-page list of local rumors, which add some local color to the proceedings.

Editing and formatting, while not perfect, are pretty good, I noticed no big problems regarding the rules and structure of the module. Layout adheres to Mists of Akuma’s busy 2-column full-color style, which manages to fit quite a bit of material on a given page. Artworks are a combination of nice full-color pieces and public domain art, which, in combination, has evolved into a rather distinct style I personally rather like. The pdf comes fully bookmarked for your convenience. Cartography is probably the best in the Mists of Akuma-modules – the maps are detailed, interesting and can be used as cut-up hand-outs.

Mike Myler’s “Scourge of Róbai Shita Temple” is perhaps the most easily plug-and-play module of all the Mists of Akuma-adventures I’ve read so far; it can be used in other contexts without major reskinning, which is certainly somewhat helpful. That is, however, also the weak spot of the adventure: While distinctly belonging to Mists of Akuma in style, themes and aesthetics, it is a slight bit less unique than my favorite, “Fangs of Revenge”, which I consider to be my personal favorite among the Mists of Akuma adventures.

That being said, I am not judging these modules by my taste, at least not exclusively, and this adventure is well-crafted…and easy to run. Where “Fangs of Revenge” can feel daunting at times and is aimed at experienced GMs, this one is much easier to run and represents a nice investigation with creepy locales, antagonists that the PCs will love to hate, etc. – in short, this is a very well-rounded module. The alternate suggestion for a more difficult investigation is very much appreciated as well and shows a level of extra thought that I certainly appreciate.

While this adventure doesn’t reach the tension of “Fangs of Revenge” or the covert-ops-assignment against the scorpion samurai, it is a module that should work well as an introduction to core tenets of Mists of Akuma, horror-gaming and, well, the leitmotifs of the setting. In short, I don’t have much to complain about here. Hence, my final verdict will clock in at 5 stars. (Experienced GMs should definitely check out “Fangs of Revenge”, though – That one has potential galore and could be the start of a mega-adventure/series…it may be a bit too ambitious for its scope, but if you can write sequels, it’s amazing…)