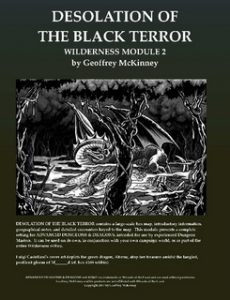 The back cover of the module is a rather nice hex-map that is a step up from the Carcosa-maps. Why? Well, while the white numbers and hex-borders are still here, they now have a shadow added, which makes them easy to decipher, even against a backdrop of a yellow desert. A downside of the hex-map, nice though it is, would be that points of interest like settlements, monuments, etc. have all been noted – though this time around, not all such locales have been fitted with a name, which is a good thing as far as I’m concerned.

The module begins with a brief summary of the geographic features…which sport an odd and imho annoying peculiarity: While plenty of places have normal, proper names, you can e.g. read “G__y Mountains” or “M____d” here – the referee is expected to fill these in. I really dislike the inconsistency here – either provide names for all locations or none – when I give one of these places a strange name, chances are I won’t run with “Silver Peaks”, right? Anyway, I think that’s inconvenient. Your mileage may vary.

Okay, we begin this hexcrawl with basically a roadside encounter, where the PCs can hunt down a bulette, which may then be turned into a magical shield – while not brilliant, this is a solid start and better than most entries featured in the direct predecessor. A natural pit containing horrid stench, inhabited by otyughs, a lair of fire drakes, mistaken for proper dragons…we get some decent wilderness encounters throughout the booklet.

Now, as before, the settlements that can be found note important NPCs and the number of able-bodied folks, but also are a bit more interesting, as they can act as a hub of sorts – we get a variety of different connections from the villages to other hexes, making everything seem less fragmented and sterile, so that’s a plus. There are also some links to #1 in the series here and there – for example, when it comes to a temporal stasis’d gnome, who may become a hireling. A settlement haunted by wolfweres is a bit weird – personally, I like the set-up, but pulling out my AD&D-resources, I have to comment on the pdf somewhat mixing what wolfweres and werewolves are and how they operate, which can lead to somewhat weird in-game logic inconsistencies. referees should take care in the context of this section.

Following the theme of the evil worm cultists, we can also find a lost shrine of the strange cult and unlucky PCs exploring the remains of the fortress of the eponymous Black Terror (whose identity remains elusive and open for referee choice) can walk right into the very potent high-priest, who may well flip the alignment of unlucky PCs…so if that is an aspect of old-school gameplay you tend to be weary of, note that he is pretty much the BBEG of the hex-map: He is by far more potent than pretty much everything else.

While all of this does sound, correctly, I might add, as though this booklet had inherited the dubious aesthetics of the predecessor, this is not wholly true, for we do get some entries that go a bit beyond: I really enjoyed e.g. the idea of the Argent Death, a particularly deadly mining gas – exploring such a poisonous, deadly place is just what adventurers should do. Similarly, the idea of a strange horn that may summon silver dragons from beyond the north wind is interesting and oozes Tolkienesque pathos. While the humanoid tribes described do not necessarily win awards, exploring a ruin suffuses with runes that explode in irregular intervals makes for a great exercise in smart playing…so if a referee is willing to expand that entry, there most assuredly is some awesomeness there.

In a somewhat interesting nod to the Dark Souls franchise (Pr so I assume), there is a hex where generations of guardians have kept a fire burning…and the PCs may well end up playing matchmaker there. We can also find a boulder suffused with ancient magics, the flame of life, which may sear or heal…there is, frankly, more wonder to be found herein than in the previous installment, and that’s a good thing.

One of my favorite hexes sports a “ghost” of a little girl…only, she seems to be convinced that the PCs aren’t really real…turns out, she is living in the city-state of a certain overlord and basically projects her consciousness/sees them via magic infused in the building. Most assuredly a nice nod and an interesting roleplaying encounter. Speaking of fun encounter: In a clearing of high grass, clover, etc., the PCs can unearth the bodies of slain adventurers, located near some massive porcupines. A letter will show the adventurers being pretty snide about nearby gnomes, who “erroneously believe that porcupines can fire their spines.” Well, guess what? These porcupines can do just that! (If you foreshadow that one by gnomes advising caution, you’ll have a fun encounter…)

So yes, this is a huge step up. It still is not truly remarkable.

Geoffrey McKinney’s second Wilderness hexcrawl is definitely a step in the right direction for the series. Don’t get me wrong: This is still very inconvenient to use; it lacks any pretensions of a metaplot and all settlements are small and far in-between…but then again, this is the wilderness, so that is expected. The potentially allied and neutral powerful NPCs that can be found here and there are nice and rather interesting. The entries themselves are more interesting and include some gems and visuals that carry the spirit of classic fantasy in a rather neat and inspiring manner. This is better than the first installment of the series in pretty much every way.

That being said, it also falls short of even the worst of his Carcosa-crawls; there is more fantasy in this one and it is slightly more dynamic than his previous work, but at the same time, there is less of a theme than the name would make you believe – ultimately, there simply isn’t much “desolation” going on here; in fact, the majority of the map is taken up by massive forests, so if you expected a magic wasteland, you’re infinitely better served by Frog God Games’ fantastic “Slumbering Tsar” or “Sword of Air.”

If you’re looking for a somewhat vanilla hexcrawl with a couple of nice ideas to develop into full-blown adventures, you can do worse…but also better.

While this hexcrawl is nowhere near as bad as the blandfest that #1 in the series was, it also falls somewhat short of what Geoffrey McKinney can deliver. In the end, this is a decent hexcrawl, but, in hindsight, not necessarily one I would buy again. Hence, my final verdict will clock in at 2.5 stars, rounded up due to my policy of in dubio pro reo.

You can get this hexcrawl exclusively here on lulu.