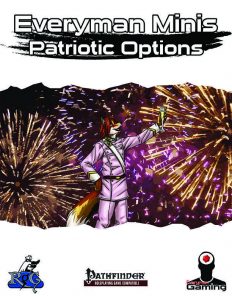 This installment of the Everyman Minis-series clocks in at 9 pages,1 page front cover, 1 page editorial, 2 pages of advertisement, 1.5 pages of SRD, leaving us with 2.5 pages of content, so let’s take a look!

All right, after a brief introduction, we begin with 5 new traits, which include being a supporter of a rebellion against an occupying force (and a +1 save bonus to one save chosen), having the ear of a powerful individual (tie-in with Fame-rules), knowing particularly much about your home (translating into skill-bonuses to two Knowledge skills), +1 skill rank and a bonus to Profession (soldier) for being a true shield of your people…and there is one trait that makes you a regional symbol and hence allows you to request small sums in goods and services. All of these traits are well-crafted, meaningful and have proper roleplaying tricks. No complaints.

Beyond these traits, we also get two different story-feats (YES!): Ambassador nets you Knowledge (local) & (nobility) as class skills and with a bonus, with a further bonus if you already have them as class skills; the goal is to broker a major treaty or accord and, yes, this is very much a feat for the faces and similar characters who strive to lead not only by force of weaponry. Cool: We have Skill Challenge Handbook synergy for verbal duels and influence skill challenges!

The second story-feat would be Patriot, which nets you a 3/day +2 morale bonus on ability checks, atk rolls, initiative, saves, skill checks or weapon damage rolls while in the chosen region. The goal is to save the region chosen or supporting it with a hefty donation – upon completion, the bonus increases and becomes more potent versus overt enemies of your nation. Oh, and additional uses. I *assume* that this self-granted bonus is not an action and that it must be announced before the roll is made, but clarification here would be appreciated.

We also receive two new vigilante social talents. The first would be Patriotism, which requires that you choose a nation you lived in for 5 years; in that nation, the vigilante’s social identity can mix and mingle with government and military, improving their starting attitude to friendly if at least indifferent. The vigilante identity may be loyal to the nation chosen or oppose it, which determines the bonus gained by the vigilante. The second talent would be the Improved Patriotism, which nets social skill bonuses and Knowledge bonuses. On the vigilante identity side, we have diplomatic immunity for loyalists or an escalation of skill-boosts for those opposing their nation – interesting material that reminded me of plenty a masked diplomat/symbol in various forms of media.

The final piece of crunch herein would be the turncoat vigilante archetype, who is locked into loyalist as the 1st level social talent, choosing home country and feigned country – the latter is the opposed country. Instead of unshakeable, 3rd level yields the option to change the feigned country 1/month. Instead of the appearance ability tree, the archetype provides startling betrayal at 5th level: When attacking a creature that considers the turncoat an ally, the creature gets a Sense Motive check: On a failure, the target is so baffled, he becomes flat-footed against the vigilante for a minute, with all attacks against the turncoat penalized. At 11th level, helpful NPCs, instead of having a higher DC, automatically fail this check and the effect gains a 30 ft.-radius range of outrage…indeed, even a whole crowd could thus fall to the betrayal of a turncoat. At 17th level, creatures with an attitude of unfriendly or better may be affected, making it really hard to not be suckered in by these guys.

Editing and formatting are top-notch, I noticed no glitches on a formal level and the rules-language is tight. Layout adheres to Everyman gaming’s nice two-column standard with a white background and the full-color artwork is nice. The pdf has no bookmarks, but needs none at this length.

Luis Loza’s patriotic options are cool: While the social tricks are not necessarily world-shaking, they are interesting and made me recall a long-time plan of a campaign focusing on fantasy warfare and diplomacy that I’ve been wanting to run for ages…but I digress. This is a well-made, interesting supplement, well worth a final verdict of 5 stars – well done!

You can get these neat options here on OBS!