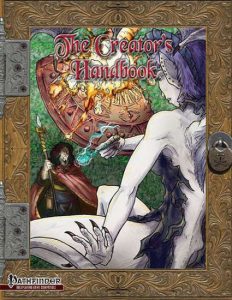 This installment of Drop Dead Studios‘ expansion of the Spheres of Power-series clocks in at 36 pages, 1 page front cover, 1 page editorial, 1 page ToC, 1 page SRD, 1page blank, 1 page back cover, leaving us with 30 pages of content, so let’s take a look!

We should start analyzing this book from the back, as the last chapter provides quite a few rather important clarifications of the Creation sphere’s parameters – particularly, the woefully brief definition of what can and can’t be created receives a much-needed, more precise clarification that should prove to be a boon for many GMs out there. Interaction with magic items, anchoring items and destruction/dismissal of objects also are very much relevant. Additionally, the base sphere now allows for the expenditure of a single spell point to extend the duration to 1 minute per level SANS concentration. That part is important and helps render the sphere significantly more appealing. The pdf also clarifies the interaction of the creation of multiple falling options and size categories and the creation of slippery and dangerous terrain. Similarly, the creation of very small objects and dropping objects is tightly codified, making these rules-clarifications pages worth the price on their own.

All right, that out of the way, if we do tackle this supplement in a linear manner, we begin with a well-written introductory prose before presenting an assortment of new archetypes, which begins with the lingichi warrior for the armorist base class, who receives proficiency in light and martial + 1 exotic weapon as well as light armor and shields, excluding tower shields. Instead of summon equipment and quick summons, the archetype provides armory arena, which allows for the summoning of an infinite array of weapons surrounding the warrior, causing damage in an area surrounding the character that grows over the level, with damage caused allowing for the choosing of physical damage type. The character may exclude targets up to spellcasting ability modifier from the aura, and the aura leaves a difficult terrain of weaponry in its wake, allowing characters to pick them up and fight. Higher levels allow for the use of create in conjunction with the ability, making it possible to establish the aura in a faster manner.

Higher levels also provide the means to maintain multiple contiguous auras. Instead of bound equipment, higher levels provide scaling enhancement bonuses for these ephemeral weapons; armor training is replaced with nimble and the archetype receives no less than 10 exclusive tricks that provide the means to use spell points to increase the damage output, control between enhancement bonus and special abilities, establishing a kind of control within the arena, exclude targets from the difficult terrain effect, have weapons dance…this archetype is INSPIRED. I mean it. Perhaps it’s the otaku within me, but I found myself reminded of Fate’s Gilgamesh and similar characters. This is a very magical archetype, and obviously not one for super-gritty settings due to its theme and supreme magic item flexibility, but for high fantasy? HECK frickin’ yes!

Archetype number two would be the word witch for the fey adept class, who uses Intelligence as spellcasting ability modifier and gains, surprise, the Creation sphere as a bonus magic talent, replacing fey magic. Instead of master illusionist, creations made by the archetype that require maintenance or concentration, ultimately remain for +1/2 class level (min 1) rounds. Shadowstuff is replaced with a massive engine-tweak dubbed “words of creation”, which is powered by a word pool equal to Int mod + ½ class level, with the DC being the classic 10 + ½ class level + Int-mod, if any. These word points may be used to create a wide variety of effects that include the creation of runes of flame that may then be launched in bulk or against multiple targets; similarly pillars of ice trapping targets, severe blasts of wind (correctly codified!) and analogue effects can be created – overall, I enjoyed these and was once more reminded of a rather compelling ability array, with higher levels providing the means to render objects animated or silver them. The adamantine coating is also secured behind an appropriate minimum level, and the archetype provides an alternate capstone.

Next up would be the dustbringer mageknight, who gains proficiency with simple and monk weapons as well as light armor, and begins play with the wrecker oracle curse as well as Creation and the limited creation drawback – as always, this can be offset if the character already has the sphere. The archetype nets alter (destroy), which should, alongside the curse and name, cue you in on what it specializes in: The dustbringer is an unarmed monk-y item-destruction specialist that blends unarmed strike with alter (destroy) and sports 7 unique mystic combat options that include auras that can destroy incoming attacks, extend the ability of alter (destroy) to animated objects and constructs, or, with another talent, living beings etc. Minor complaint here: Formatting isn’t perfect in this one and somewhat inconsistent. Some moderate Destruction sphere synergy is also possible, allowing for (blast shape) talents to be added.

The thaumaturge may elect for the path of the knight of willpower, who modifies forbidden lore to add +50% CL increase to Creation, Light and Telekinesis, though this does not influence invocation bonus. This may be boosted even further, but at the cost of unavoidable backlash. I consider the increase here to be somewhat overkill – sure, the drawback is significant, but the escalation of CL is something that worries me greatly. The meditation and lingering pain invocations are replaced with Will-save rerolling and adding a shaken effect to glow effects from the Light sphere. They also get a buff/debuff aura versus fear plus immunity instead of occult knowledge, and an alternate bonus feat list. Incanters can gain two new specializations, one of which, at 2 points, Master of Creation, prevents taking Sphere Focus (Creation) and represents a specialization here, while Sword Birth nets armory arena and limited arsenal tricks. Hedgewitches may choose the new transmuter tradition, which nets Knowledge (engineering) and (nature) as well as Intimidate and limited use item changing via touch that improves regarding the maximum size of item affected at higher levels. Later, these folks may transmute objects into creatures and animals into different types, while also bestowing knowledge on how to use this new body via one of the 4 new tradition secret. 3 grand ones are also included here. A general one allows for dabbling in these tricks, and the section closes with a talent for the unchained rogue to create tools.

The undoubtedly most important chapter within this book, though, would be the basic magic section, wherein the creation of alchemical items and poisons is tightly codified and makes for a very important, and flexibility-wise super cool modification. Similarly, being capable of altering unattended non-magical objects in burst is great…and creating objects with momentum makes dropping objects on foes a significantly more feasible option. Fans of the Loony Tunes should take heed! The update of the Expanded Materials talent, which encompasses acidic creation, gaseous creation, plasma production, etc. is similarly a godsend. Magnifying and minimizing objects, creating matter from force, generating significant amounts of liquid…and what about the talent that lets you generate a constant stream of replicas with your effects. Manipulating how rigid objects are, creating restraining cases for targets, making material transparent…this chapter is a complex expansion to the sphere that it desperately needed, and it presents a whole slew of versatile options for clever players.

The advanced talent array this time around, and it contains 10 advanced talents; as an aside, I am not the biggest fan of the talent Plasma Production having the same name as the ability of the subsection of aforementioned Expanded Materials: Plasma Production; a single “advanced” or somesuch word would have made working with the nomenclature here easier, but that is me nitpicking. And yes, this allows for the creation of energy weapons. Want a light sword? There you go! Really high-level characters can learn to create adamantine and similar materials, and yes, with these, you can use advanced talents to modify the body of targets into other materials. Skin of gold? Yes, siree! There also are crossover tricks here – spherecasters that also have the Nature sphere and fire package can create/alter lava and magma. Picture me cackling maniacally here. All in all, I very much enjoyed this section as well.

The pdf then proceeds to present no less than 12 different feats. Once more, formatting is not always perfect within these pages, but there are feats that provide multiclassing support…and there are some really neat ones: One lets you ready an action (alternatively, works with spell point + immediate actions) to alter destructive blasts and codifies the types via damage and interaction there correctly. Countering ranged attacks and spell effects is another pretty potent and cool option here. The classic Dual Sphere talent array that we expect here is included as well, providing synergy with e.g. Enhancement and Telekinesis. Creating longer walls and disguise specializing via wardrobe creation may be found as well. 4 traits can be found – these are potent and meaningful, going beyond boring numerical bonuses.

The drawbacks presented are interesting: Being limited to water/ice/steam creation, to gaseous forms or needing to be in contact with objects certainly made me think of comic book heroes and interesting character concepts. Using your own body in a painful way to “create” could be seen as an interesting engine base-line to duplicate an array of iconic scenes as well. The pdf also sports a new general drawback that requires the drawing of a diagram to work – this reminded me, obviously, of Full Metal Alchemist – and that is a good thing. The section also presents 7 alternate racial traits that focus, unsurprisingly, on the Creation sphere.

Finally, it should be noted that the pdf contains 6 magic items. Beyond aforementioned energy swords, there is the +3-equivalent plasma blade property; Wall slats allow for a the creation of expanding walls as a nice low-cost item. The wizard’s cube of gaming is basically a fold-out gaming table and acts as a challenge of skill and luck that rewards those that play well; two variants of this item are also part of the deal here.

Editing per se is very good on a formal and rules-language level; formatting, on the other hand, isn’t. I encountered quite a bunch of faulty italicizations and formatting instances of rules-relevant material, and due to the complexity of the system at hand the nomenclature employed, these deviations made a couple of rules harder to grasp than they otherwise would have been. Layout adheres to a two-column full-color standard and the pdf sports a couple of solid full-color artworks. The pdf comes fully bookmarked for your convenience.

Michael Uhland has vastly improved his design-game since his humble beginnings. The handbook for the creation sphere certainly was one of the harder ones to craft, much less provide inspiring and interesting content for. This pdf manages to achieve that and makes creation fun and exciting, clarifies rules and vastly expands the material at hand. This would, were it not for the annoying formatting hiccups, my favorite handbook in the whole series so far; it offers a bunch of very interesting character options; unique feats, great talents – all in all, this is a really, really cool supplement and a worthy addition to the series. My final verdict will clock in at 4.5 stars, though I will round up for the purpose of this platform. The book is too good to round down. Well done!

Want the Hero Lab files? You can find them here!

The pdf/Hero-lab bundle can be found here!