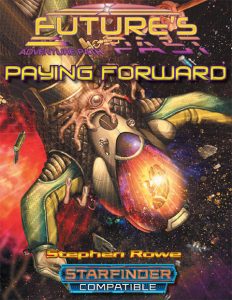 The second part of the Future’s Past AP clocks in at 21 pages, 1 page front cover, 1 page editorial/ToC, 1 page advertisement (somewhat to my annoyance in the middle of the module), 1 page SRD, 1 page back cover, leaving us with 16 pages of content, so let’s take a look!

It should be noted that, as before, the module does come with expertly crafted monsters with glyphs denoting their general role. The module starts pretty much immediately where Part #1 left off, and, as before, has proper stats for pretty much everything, read-aloud text where you’d expect it to be, etc..

The following contains MASSIVE SPOILERS for the end of the first module in the series, as well as for the entirety of this adventure. As such, I STRONGLY urge anyone wo wants to play this adventure to skip ahead to the conclusion.

All right, only GMs around? Great! So, things look pretty hopeless for the PCs: They are stranded on Edge Station in Druune space, probably infected by Druune cells that will probably mutate them into disturbing Necromorph-like monstrosities enslaved by the Druune, and their powerful Central AI has deserted them. The final orders of the AI were to destroy the prototype timemachine the Druune developed – and it’s up to the PCs to decide on whether to follow this suicidal command and martyr themselves, or attempt to use it.

Indeed, an extremely dangerous mission has just become outright suicidal, as the PCs are bereft of Central AI’s exceedingly potent guidance – but in its stead, something else has taken the place of a global effect: You see, across infinite realities, the PCs have perished, failed, died. Again and again and again…until one of them got through, sending a part of the PC’s consciousness back through time, allowing the PC to have limited control over the time-stream via visions, ideas, etc. Set against the backdrop of Druune-cells subverting the consciousness of PCs, this should not simply be a form of fate favoring the PCs (and a means for the GM to help out, if they get stuck), but also represent a constant source of paranoia. This is incredibly clever from a narrative point of view. I adore it! Better yet: If the PCs figure out what’s going on, they can use this to a somewhat chaotic, but utterly unique effect – thematically, it’s a great continuation and escalation of both in-game and meta-game practices of module #1…and I could well spend another page extolling the virtues of how much sense this makes. Suffice to say, I love it. And yes, Druune infection is ALSO part of the atmospheric themes going on here.

The most sensible reaction for most PCs will probably be attempting to simply take their space ship and get the hell out – but Central Ai has hacked the docking station’s module and sent their craft hurtling into space. Worse, the outside of the station is covered in Druune remnant swarms, one of the new monsters within.

Whether they want to heed Central AI’s suicidal commands or use the time-machine, the PCs will have to dive deeper into Edge Station, and indeed, the pdf does note information that the PCs can glean by doing their legwork here. Leaving the lab-section, the PCs get to deal with the offices of the now Druune-enslaved populace – full of hazards and a dark theme reminiscent, once more – at least from a player’s perspective, of the fantastic space horror that the first Dead Space game managed to evoke. (You know, before EA made the franchise a sucky action-game that no one wanted…) Genuinely creepy whispers from victims in various stages of Druune transformation, a rudimentary and imperfectly-sealed hole that may suck PCs into vacuum…and yes, the Druune infection can be transmitted by some of the traps found within. Horrid gestalt things, a technogolem spreading Druune-infection…the atmosphere is pretty much pitch-perfect.

Clever PCs can find experimental Druune weapons, a 3d-copy machine…and yes, copies of creatures may be made…with potentially…öhem…interesting consequences. It is in the depths of the complex, past all of that, where things take a turn for another one of the games that really blew me away: SOMA. You see, the Druune have found a way to transfer consciousness between beings (yes, PCs could use that to, e.g., lose their Druune-infection-ridden bodies…but it’d trap the consciousness in that body…so yeah, anyone up for doing some nasty things to the duplicates you may have made?

Oh, and ultimately, the PCs will reach the Druune, see the PC that made it – the one that helped them get so far, that proceeded to kill himself to avoid assimilation by the Druune, and thus presented the chance the PCs took: A vision takes a hold of the time traveler PC, one that explains a lot, one that actually sent shivers down my spine. I am not exaggerating. This reveal, which I deliberately did not spoil in my review of module #1, is just brilliant. After this, we get the final boss fight, including unique temporal distortion effects, – and then, a travel back through time. To another body, as the PCs can only project their consciousness back through time. It’s 3 days before first contact with the Druune. Time’s ticking.

Editing and formatting are top-notch on a formal and rules-language level. Layout adheres to a beautiful 2-column full-color standard, and the pdf sports a bunch of truly amazing, original full-color artworks. The cartography is in full-color as well, and comes with player-friendly versions, ensuring that you can use them as handouts and VTT-functionality. The pdf comes fully bookmarked for your convenience.

And here I was, thinking that Stephen Rowe, a masterclass designer and storyteller, had delivered an excellent adventure in #1 of this AP. It’s baffling. It really is. After a module that was exceedingly hard to follow up on, this actually manages to surpass the first module. The craftsmanship and artistry is just as amazing as before, but it’s the extremely efficient use of paranoia, with distinct science-fiction themes, that is frankly, a class of its own. I am not engaging in hyperbole when I’m saying that this module, in its pages, manages to tackle more exciting themes than many whole campaigns. Blending questions of transhumanism and what constitutes identity with time-travel, adding a complex and truly intelligent plot, and topping it off with a reveal that WILL leave your players slack-jawed and truly stunned/mind-blown? This module does it all, and is a perfect example of quality over quantity. This is master-class storytelling and adventure design. 5 stars + seal of approval, and this is a candidate for my Top Ten of 2018. It’s this good. If the AP can retain this level of brilliant writing, then we’re looking at a masterpiece for the ages.

You can get this brilliant adventure here on OBS!