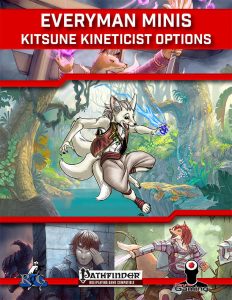 This pdf clocks in at 9 pages, 1 page front cover, 1 page editorial, 4 pages of SRD, leaving us with one page of introduction that also contains a nice kitsune proverb as well as 2 pages of content.

On these pages, we find a total of 5 new feats and a new archetype, so let’s take a look and start with feats!

-Kinetic Felling: When your blast would kill your foes, you can, as an immediate action, accept 1 + a utility wild talent’s burn cost to refrain from killing your foes and leaving them instead stable at Constitution score -1 negative hit points. Opponents get a save versus the talent and take a penalty depending on the overkill by which you’d have killed them. Interesting one from a story-perspective.

-Kinetic Shapechanger: Lets you use kinetic blasts, gather power etc. when polymorphed if the creature lacks hands or prehensile appendages. *Personally*, I’d have tied that to the ability to executed natural attacks, but yeah. That’s aesthetics. Slightly odd: Alternate shapes can hence use the blasts with hands full, while the regular form can’t…that’s a bit strange.

-Kinetic Kyubi: This one is massive. It basically provides a kitsune-themed list of spells and codifies them as a utility wild talents available for each element of the listed level, with a burn cost of 1. Some of these are permanent, and they are treated as psychic magic for spellcasting interaction, with CL equal to kineticist level and save DC adhering to default utility wild talent save DC scaling. Interesting: Higher level options net their lower level brethren. You grow one tail per talent chosen, but otherwise, this has no impact. There is a problem here, and it’s a pretty big one. The verbiage makes, for example overwhelming presence last until you next recover burn. That’s usually a level 9 spell with rounds as duration. Oh, and all of these “unless otherwise noted” cost 1 burn. One has a burn cost of 0, but apart from that, NONE of them have a diverging cost noted. This feat is broken and needs careful reevaluation.

-Blazing Fox Form: Whenever an opponent within 30 ft. makes a melee or ranged attack against you and misses, you can accept 1 point of burn as an immediate action, transform into a Tiny fox, and move up to 50 ft. with perfect fly speed, and if you possess Swift Kitsune Shapechanger, you may also use it as a move or as a free action. This is stated to interact with kineticist class features as an utility wild talent, but does not specify an effective spell level.

-Exploding Fox Form: I get what this tries to do. It builds on the previous feat, which is stated to interact with class features as a utility wild talent, but its verbiage falls apart. “Whenever you use the Blazing Fox Form feat, you can attack one creature who was adjacent to you when you used this ability with your kinetic blast.” Thing is, we didn’t use Blazing Fox Form with the kinetic blast; we were attacked and used it as a response. There is some sort of confusion here. Blasts are not utility wild talents and while some utility wild talents can modify blasts, they don’t have to. This is further complicated by requiring the modification of the blast to be executed by the kinetic blade infusion, which makes the sequence of events somewhat odd.

The archetype contained herein would be the chosen of the clan, who must be non-evil and has a code of conduct. At 1st level, the chosen of the clan can use gather power to transform her body’s vitality into elemental matter as an alternate means to gather power, choosing development or youth. If she uses this ability, she reduces the total burn cost of the next blast or utility wild talent by 2 as a move action, 3 as a standard action. This either increases the age of the character by 1/10th of the minimum age for venerable, rounded up, or decreases age by 1/10th. Odd: Only the becoming younger aspect features the caveat “for every point of burn prevented”, while the other option presents a one-time reduction. Pretty positive that’s an oversight. Changes to age remain for 24 hours, after which the character returns to her true age at the range of 1 year per hour. In short: This ability is intended to work in context with Everyman Gaming’s excellent Childhood Adventures book, but is a bit confused. It can’t kill you/regress you beyond newborn, btw….so once you are an infant or venerable, gather away. Pretty sure that’s an oversight as well.

Starting at 4th level, the kitsune may choose a selection of ninja tricks or feats instead of a utility wild talent, which includes the new feats or “Vulpine Pounce (see below).” Guess what’s not below? Bingo. Vulpine Pounce. 12th level unlocks master tricks, and burn is substituted for ki, with the ability expressly providing the means to use them in conjunction with the gather power tweaks.

Editing and formatting, on a formal level, are very good. On a rules-language level, though, this is not up to par for either author Clinton Boomer, or Everyman Gaming. Kineticist rules-language is complex and intricate, but here, we have quite a few stumbles that I usually don’t get to see from them. Layout adheres to a colorful, nice 2-column full-color standard and the pdf has no bookmarks, but needs none.

This pdf left me very disappointed. I like kitsune, and Clinton Boomer’s high-concept design tends to be amazing. Well, nobody can win all the time, and this time, a couple of things have seriously gone wrong. The Fox-feats should simply be utility wild talents; there are inconsistencies in the archetype’s verbiage and the Kyubi feat’s interaction with the kineticist chassis are WEIRD and kinda broken. I wanted to love this little pdf, but frankly, it has a lot of issues for its brevity. I can’t go higher than 2 stars.