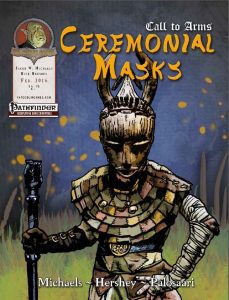 This installment of the Call to Arms-series clocks in at 21 pages, 1 page front cover, 1 page editorial, 1 page ToC, 1 page SRD, 1 page advertisement leaving us with 16 pages of content, so let’s take a look!

This installment of the series begins with a nice, brief rundown of ceremonial masks within the context of our real world history, from Africa to Egypt, Asia, Oceania and all the other parts of this little ball of dirt we call home. The first array of masks presented here begin with regular masks and their masterwork equivalent before introducing a selection of masks that range from facilitating the binding of outsiders to supplementing arcane spell duel tricks or reduced ritual costs. Similarly, monster masks for theater performances are increased in their value by adding mechanical relevance to those wearing them.

Beyond the assortment of mundane masks, though, the pdf also features an array of magical ceremonial masks, 20 to be more precise – and they range in price from 4K to 90K gold. The first, the magical beast mask that conveys a hunter’s animal focus to the wearer, though the wording could be more precise in stating that the animal focus is equal to the mask’s features – the connection is RAW not explicit. The exorcist’s mask may expel creatures…if they fail a DC 11 save…which is pretty easy, considering how most possessing creatures are pretty strong and tend to have good Will-saves. Not the most impressive of items and probably would have been served better via a scaling DC. Ghost Masks let you see the invisible and ethereal. The two healing masks increase base dice-sizes of cure spells and net a bonus to Heal checks and CLs when casting neutralize poison or remove disease (plus remove curse for greater ones…). The greater one sports a minor deviation from the default rules-language conventions, when channel energy can be expended to add “The result” to her CL check against the DC of the affliction. Result of what? The amount healed? WTF? That could even heal divine curses! Oo

The two variants of the masks of giants grant numerical bonuses and some limited special monster abilities associated with the giants chosen. Okay, but not brilliant. The mask of cosmic horror is underpirced slightly, offering 3/day 100-ft. save or suck confusion to all looking. I assume this activation follows default rules, but an action would have been appreciated still. Same goes for the mask of the krenshar, which is the weaker fear-based variant o the concept. The mask of the skull is evocative – it represents a skull flying to a target…and the target touched (50 ft. range) is finger of death’d. The range is pretty strong, but 1/day use is a balancing component alongside the minimum duration worn to activate, which prevents mask circling. It may be a spell in a can…but it is one with an interesting variation. Once again, no activation action, though. Which becomes weird, considering that the medusa mask does sport an activation action. Necromancer’s masks let you shift death knell to allied undead. Unfortunately, I am not sure how the secondary boon is supposed to work:”If the wearer immediately casts animate dead, create undead or create greater undead on the subject creature after killing it, he loses all benefits of the death knell spell but the target permanently gains the advanced creature template.” I get what this is supposed to do – but what does “immediately” mean? Within the round? Is the death knell still active, but needs to run its course sans benefits? No clue.

The ritual mask similarly feels a bit confused – the idea is that the mask lets you prolong casting time for more power: “By doubling casting time, the wearer may add +1 to the caster level, the spell, or to the level of the spell for purposes of applying a metamagic feat he knows.” Ähem…two out of these are actually penalties, considering that numerical scaling is not modified by increased spell levels, only the save DC. I honestly don’t get how this one’s supposed to work, probably also because the numbers of the example are faulty….either that, or the sentence structure is wrong. The transference of non-instantaneous spell effects or magic item benefits to nearby allies via spellmasks is btw. a can of worms I’d strongly suggest not opening; targets of spells are crucial components of the balancing of the like and many a magic item actually has its bonus/slot/minimum wearing time for a reason. This breaks the system. That being said, there are some gems herein – what about masks you can affix to walls that then proceed to swallow AoE effects, converting them to luck for the person who hung it on the wall? Pretty cool! Similarly, masks radiating auras that cause vulnerability for designated foes make sense and work neatly! The tranquility masks can be used to quench haunts. Witch masks, even at 60 K, are way OP – as a move action, you can extend durations or round-duration-spells by 1 round. No limit. Not getting near my game, even before the modified mirror image effect add further value here.

The pdf also features 3 cool cursed masks and the intelligent mask that was created out of the attempt of dread Sabelest Anahm’s attempt at lich-ascendence, providing the undead anatomy tricks as well as undead creation. The mythic Anubis mask grows the wearer as enlarge person and nets undeath to death 1/day. Mythic beings that also expend mythic power as part of channel energy to add up to tier number of d6s to the ability and prevent them from becoming undead. The artifact provided would be the mask of the outsiders, which allows for control over outsiders, trap the soul outsiders in the mask and hijack subtype traits of outsiders thus trapped, but at the cost of a negative level for the outsider – and ultimately, potentially, destruction. But what is the DC for the outsdider to get rid of the negative level? The trap the soul DC 26 or the control summoned creature DC 22 ability? I assume the former, but am not sure.

The pdf concludes with the masked shaman archetype for the shaman class, who replaces spirit animal with mask that provides a linear progression of spells granted by the mask 1/day each. Also, while wearing the mask, the spirit animal’s granted power can be applied to the shaman, activated as a swift action for class level minutes, to be spent in 1-minute increments. A cool engine tweak that plays sufficiently differently.

Editing and formatting are good on a formal level, though on a rules level, the pdf could be slightly more precise. Layout adheres to Fat Goblin Games’ two-column full-color standard and the pdf comes fully bookmarked for your convenience. Artworks are neat and full color.

Jacob W. Michaels’ masks aren’t a bad installment of the series and in fact contain some gems – I like the archetype and the wall masks in particular. I am not sold on the pricing of quite a few of them, though and for my taste, there are slightly too much spells in a can…though, to be frank, they at least do interesting things to modify them. Still, this does have some rough edges. I can’t go higher than 3.5 stars, rounded down to 3 for the purpose of this platform.

You can get this solid little equipment pdf here on OBS!

You can directly be coached by Fat Goblin Games here!
Endzeitgeist out.