Treasury of the Pharaohs

Treasury of the Pharaohs 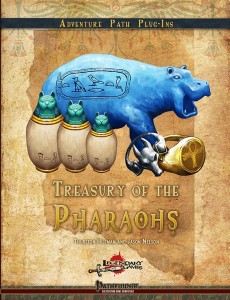 As has become the tradition in Legendary Games treasury-supplements, which contain items suitable for the respective APs, this one begins with a handy table of items by price, this time ranging from 900 gp to artifact-level…so let’s not waste much time and dive right into this!

We begin this supplement with 4 different armors – the first of which would be the slick hide armor made of magically-preserved asp hides. At a command, this armor can sprout fangs that makes those foolish enough to attack the wearer with natural attacks or unarmed strikes subject to poison – oddly, sans doing damage. So why not make the poison contact instead of injury instead of this jury-rig? Creatures with DR should probably not be subject to this poison, right? Not particularly smooth, even though I like the option to poison weapons. Additionally, the ability to exude poison has no daily cap – which makes me wonder, whether the poison can be harvested and/or sold – and how many of the poison-applications can be in effect at a given time. As provided, there is no limit, though the poison is expended on a successful attack or after 24 hours.

The Dynast Aegis-shield allows for two effects – one, the designation of a charge, who then receives the shield bonus while adjacent to the wielder, and two, add a 30 ft.-sand-based reposition 2/day via a shield bash – alas, this locks the shield bash into being a standard action when used with this ability, which is kind of sad, since it limits the item’s combo-potential. The radiant pharaoh’s mail not only provides continuous light, it also can “oonce” [sic!] per day as a swift action provide daylight. Odd – it can quicken daylight and light if cast as a spell or SP 3/day (limited usefulness) as a swift action. More interestingly, the armor can 3/day counter hits with a melee-variant of searing light, which is particularly efficient versus crits or alternatively, extend these charges in a sunburst. The final armor is the most intriguing – rugged-looking, it bestows some of a camel’s toughness and carrying capacity to the wielder. It can also soak up a potion, which may then be used by breaking the armor as a move action. Interesting one!

How do the specific weapons fare? Well, there would be a dagger that can transform into three types of spear, also helping interaction with daemons an providing resistance versus mind-influencing effects, with crits potentially afflicting the victim with a nasty curse. There would be a sling that can damage adjacent foes with acidic winds that double as a wind wall and a khopesh that allows you to use channel energy versus fire-outsiders and create areas of coolness that allow you to weather the desert sun. nice one! There also would be javelins that can conjure forth pits and there would be a sickle that bleeds foes and which may return those slain by it as dread mummies. More interesting would be a whip-dagger that conjures forth ravenous swarms of scarabs on the targets on a critical hit. On a nitpicky aside – the swarm occupies the target’s space, which is odd, since larger creatures obviously have a larger space and, moving out of it, larger swarms may remain. What about tiny or diminutive foes? Do they get one square of swarm or none? What are the rules for a fine creature’s 1/2 ft.-swarm?

The scepter of wadjet provides +1 AC, +1 to all saves. +2 if wielded in both hands. The very definition of boring filler – next. The Storm general’s Lance is more intriguing – it has slots, into which you can load arrows, which then are destroyed, granting the lance a charge – yes, loading with Quick Draw is covered. Each charge allows the wielder to project a jolt of electricity with a range of 60 ft., dealing 1d6+1 electricity damage, with some ranged combat feats applying to the attack. 1/week, you can conjure forth a chariot of light, including riders and horses – as awesome as the scepter before was lame.

The pdf provides two different rings – the first of which allows for at-will detect undead and makes unintelligent undead ignore the character as long as the character is not hostile. Boring. The intelligent Signet of the Life Pharaoh is a ring of protection that can also cast minor heal-spells that also add a massive buff of +5 to skill & ability-checks, atk and saves to the healed target. The ring can also execute a reflexive breath of life that also nets +10 to a single Cha- or Wis-based skill-check, whereupon the ring becomes dormant for a week. Alas, as per the wording, ONLY when the skill-check is made. As written, one can simply wait 1 hour and have the bonus elapse to cheese the ring -the rules-language could have been clearer here.

There also are two rods here – the chief engineer’s rod provides a +5 to Knowledge (engineering) and Craft (stonemasonry) and may be wielded as a masterwork whip – which may, 1/day, convey ant haul for 5 hours to those struck – which is nice imagery, but still, just spell-in-a-can. Where the item gets its own identity is with the option to concentrate on an object of up to 1000 lbs to move it up to 20 ft. I assume this cannot be used to lift objects, but I’m not sure. I assume concentrating follows the rules for concentrating on spells, but I’m not sure there either. The Element Pharaoh’s Crook is interesting in that it randomly determines the elemental damage it additionally deals and it nets Elemental Channel for one subtype or, if you already have the feat, apply it to all elementals. The same applies for Elemental Spell. Nice one!

The Spirit Pharaoh’s Staff can deliver its charm-themed spells via touch, thus enforcing a double roll of the save, forcing the victim to take the worse result. I assume the charge can be held as per the usual rules here. The pdf also provides an array of wondrous items, with alabaster icons of Bast providing spells-in-a-statue, with their conjoined set allowing for the summoning of feline creatures to serve you. Undead can get an amulet that allows them to negate most positive energies and better disguise themselves as alive. Canopic Sentinel Jars are AWESOME – the first item herein to really excite me: They allow a creature to ritualistically remove a canopic organ from their body, gaining fortification-like properties that stack – alas, moving too far from the jars sees the organs return, thus making them suboptimal choices for most PCs…unless they get creative, for yes, the extradimensional trickery that comes to mind first has been covered. Two triumphant thumbs up!

Also pretty cool – a powerful chest that provides eternal rest to the donors of canopic organs placed inside – great to make those undead sty down, to make them shut up for once and for all. The carpet of desert fire, intended for servants or Ra or Saranrae provides the user fire resistance and enhances planar allies with a fire-theme called, while spellcasters with the Fire Domain preparing spells on it can expend charges to Elemental Spell his spells. Additionally, charges can be used to bolster creatures of fire versus cold or contact other plane/sending. Once again, an interesting, unconventional item – kudos! There is also a censer that allows for whispering wind/animal messenger – including limited servitude of an air elemental to the massage’s recipient – per se, an okay concept that is interesting due to its minor tweaks of the spell-in-a-jar-formula.

Faïence idols can be generally considered somewhat akin to figurines of wondrous power with slight modifications, most notably, each of them sporting a DR. Generally, a thematically-fitting class of item. There also is a cool mirror – not only can it generate water and goodberry-figs – it can also draw creatures in, as a variant of aqueous orb -while, again, very spell-based, it puts unique spins on the respective spells – which makes the item cool and worthwhile. The map cartouche is downright genius – when placed next to a map, 1/day, it can reveal a hazard or hidden compartment. This is a GREAT way for GMs to help stuck players. Two thumbs up!!

Papyri of Supplication are essentially a story-item – providing somewhat limited wish-like benefits, they require a strict procedural to execute and can double as either a story-driven effect or as a wild-card spell – not for everyone and an item that should remain scarce to maintain in-game-logic, but per se a cool idea. Finally, there would be a magical stele that doubles as an alarm +360°-surveillance – love it!

The pdf closes with an artifact – the funerary pyramid: A powerful artifact of necromancy, it not only allows for the control of the living dead, it also makes you a powerful general of the walking dead. It also radiates a continuous desecrate and may absorb huge quantities of positive energy – a great way to enhance Mummy Mask’s at times pretty pitiful performances of the BBEGs, even though it generally did not blow me totally away.

Editing and formatting are very good, though the rules-language is a bit less refined than I’m accustomed to by Legendary Games. Layout adheres to a GORGEOUS two-column full-color standard that ranks among the most beautiful among Legendary Games’ different styles. The pdf has numerous nice artworks of items. The pdf comes bookmarked, but only by category, not by item.

Thurston Hillman and Jason Nelson are both talented designers and this review should be considered a testament to Legendary Games quality-level…but there’s no two ways about it, this disappointed me a high level. Legendary Games’ item-books usually sport some truly astounding items that modify the base tricks, going one step beyond and indeed, this pdf does sport a couple such items that are downright genius. However, what usually is an array of truly imaginative and uncommon options this time around has some mechanical glitches here and there and others…well, are simply not that interesting. This pdf ultimately falls a bit short of what these pdfs usually offer. Hence, my final verdict will clock in at 3.5 stars, rounded down since quite a few of the items provide some issues or are filler. This is still worth it for the good items, though.

You can get this collection of magic items here on OBS and here on d20pfsrd.com’s shop.

You can preorder Mummy Mask-plug-ins/support the line via this patreon!