Chronicle of the Gatekeepers Sidetrek: What Comes Before the First

Chronicle of the Gatekeepers Sidetrek: What Comes Before the First 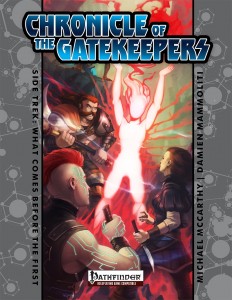 This sidetrek of the Chronicle of the Gatekeepers campaign serial clocks in at 11 pages, 1 page front cover, 1 page editorial, 1 page back cover, 1 page SRD, leaving us with 7 pages of content, so let’s take a look!

Everyone on exodus knows the tale of how the Kaga won freedom from oppression from the First Ones – though the exposition the PCs receive here is decidedly muddied. The strange question now crossing the minds of quite a few individuals is this: What if those nebulous Gatekeepers were there before the First Ones? Thus, the PCs are sent forth by Large-Biter, asking them to return to the corpselands the PCs passed in the Alpha-adventure to explore an ancient tomb, which may contain hints on the age predating the First Ones.

And indeed, there is something odd regarding this tomb, with all insignia and murals being done in dark ink, hinting towards a type of creature that can see in the dark…and yes, in spite of darkvision’s usual limitations. The complex and its inscriptions continue to mention the strange name Oten – and treasures like magical mummified, female hands and several traps continue to evoke a sense of exploring a complex from a bygone age – mood-wise, this is indeed a well-crafted tomb that allows solid deductions on the somewhat Egyptian belief-system that was once featured here – which should also explain why Oten, amidst a scene of spectral revelers, constitutes the final mummy-boss of this dungeon – though, to access him, one must first solve a simple, yet interesting puzzle. The true treasure, though, would be knowledge – in Oten’s burial chamber he lords over humans, while negotiating with a brown-skinned giant that looms over insectoid servitors – it seems like the gatekeepers indeed have had contact with this ancient civilization.

Editing and formatting are pretty good, I noticed no glaring issues. Layout adheres to the gorgeous 2-column full-color standard of the series. The pdf comes fully bookmarked for your convenience and in two versions – one being more printer-friendly. Cartography by Tommi Salama is, as always, nice,, though the somewhat bare-bones map of the dungeon isn’t his most refined work. Great bonus: The map comes with a player-friendly version – kudos for including this!

Michael McCarthy and Louis Porter Jr. deliver a very atmospheric mini-dungeon-crawl here: The strange culture depicted here and its indirect storytelling is compelling, unique and managed to capture well the wonder of archeology and the inclusion of a puzzle related to the culture that is explored is a great addition, especially considering the limited space in which this pdf operates.

At the same time, though, I couldn’t help but feel like this could have been so much more: Where is the confounding hallway, the shifting room, the truly nasty death trap? The dungeon, alas, is basically a corridor (winding and with traps and one either left or right-first-choice, granted, but still…) that offers no real choice or sequential variation. The puzzle does save this one from being too linear, but a slightly more interesting make-up (perhaps with slightly more unique traps/hazards/haunts) could have made this full-blown awesome. Now mind you, for such a short module, it still captures more mood and atmosphere than many books of a larger size – and as such, my final verdict will clock in at 4 stars.