The Genius Guide to Mythic Subpaths

The Genius Guide to Mythic Subpaths 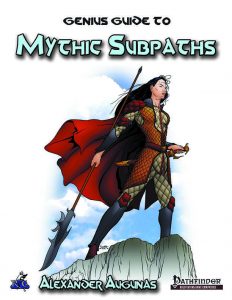 So, what are mythic subpaths? In short, they are a kind of deviation/modification of an existing mythic path, somewhat akin to e.g. subdomains, one that comes in roughly 3 distinctions: Archetypical subpaths are only available to characters that chose the listed mythic path or paths. Racial subpaths are tied to the race noted and universal subpaths are available for, bingo, everyone. Mythic subpaths thus do sport some sort of prerequisite to qualify for them.

Okay, got that? Humans can choose the dilettante subpath, but need to meet no less than 3 (!!) categories for mythic boons in the adventure that led to ascension. The mythic surge is lowere by one die step for them, but they may gain Dual Path, Extra Path and the extra mythic feast 1st tier universal path ability multiple times; at 5th and 10th level an additional time, which is pretty potent. Instead of gaining a mythic feat, you may choose one of 4 different abilities, which include a champion’s mythic weapon training, path dabbling (synergy with Dual Path included), ultimate versatility (with more uses at 4th tier) and being treated as a fighter for feat prerequisites of human feats. Not the biggest fan of having ultimate versatility’s 3rd tier prerequisite potentially circumvented by the combination of this flexibility ability.

Halflings may select to become fortune’s favored – provided they rolled three natural 20s in the adventure that led to their ascension. They also must have adaptive luck to choose the subpath…and they are problematic: You seem they may use adaptive luck as mythic power interchangeably. That is an instant, massive increase of the most potent resource in the game. Not getting near my table. While this replaces the 1st tier ability and while the non-mythic feat selection restriction is nasty, this still is not a subpath I’d allow.

Herald of the Gods is universal and requires the selection of a patron deity, 1st tier nets you a domain – the spells you get there are cast via mythic power expenditure. Additionally, you can, at 6th tier, cast commune and may even use mythic power to do so as a free action. This one replaces all mythic feats gained as base mythic abilities. At 1st tier, the mythic subpath nets the 6th tier (!!) archmage’s sanctum path ability sans servants and you don’t have a door: You may acess it via mythic power and take 3 creatures per tier with you. Now, what’s amazing is this: The area expands and ties in with the kingdom building rules – you get to properly develop your sanctum as a form of paradise for your faithful, with higher levels providing a permanent gate to it! The subpath is locked into divine scourge at 3rd tier and every 3 tiers thereafter.

The legendary ruler universal path ability is another one I really enjoy – the path is all about being the ruler of a kingdom, enhances leadership, etc. – no complaints regarding this one. The lord of rebirth would be a samsaran-exclusive and requires that you die during your moment of ascension. If you do, you basically become a Dr. Who variant – you immediately reincarnate upon being slain…but only for a total of 13 times. This replaces hard to kill. You also get the sanctum at 1st tier and may expend mythic power while inside it to scry…and akin to the Tardis, you may place the door, though teleport restrictions apply. The Dr. Who reference is btw. earned – much like the Doctor, you temporarily lose mythic abilities when reincarnating, though this restriction becomes less imposing at 9th tier. Very flavorful!

The peacekeeper is exclusive to champion, hierophant, guardian and marshal, and requires that you ended a blood feud, war, etc. prior to ascension. The subpath restricts the choices for Dual Path and allows you to use surges to render all damage caused with attacks benefiting from it to non-lethal damage. The subpath also comes with a potent sanctuary aura and the option to replace mythic feats or path abilities with boons that enhance the aura, the elimination of a save against it for targets that worship the same deity, numerical escalation to Charisma-based checks to resolve conflict etc. – I like this one, particularly since you can help your allies being peaceful and efficient as well. Kudos

The nine-tailed heir kitsune subpath is per se interesting, but suffers a bit from the age of this book; you see, this Genius Guide was penned some time ago and was only recently released; Alexander Augunas has since then grown tremendously as a designer and while this is not bad, the kitsune subpath in particular pales before the amazing kyubi paragon he has penned since.

Now, the final 4 pages of this pdf are not devoted to more subpaths, but instead provide mythic feats. There is a reason for that, at least to an extent – the human-centric luck feats, for example. When compared to Legendary Games’ solutions for these feats (e.g. when looking at Bestow Luck, released in mythic mini #70), you’ll notice that the options presented herein gravitate to a higher power-level than LG’s – this does not make them bad, mind you, but it should be noted that the feats presented herein, e.g. the mythic version of Dauntless Destiny, focus on some serious escalation of numbers – you’ll see + tier daily uses of limited use feats, tier added to rolls etc. here. This does not hold universally true, mind you – LG’s mythic rules support has the massive advantage of being able to draw on a vast resource of mythic feats, spells and path abilities, though for mythic core-centric gameplay, e.g. this pdf’s take on Critical Versatility may be the more down to earth one. LG’s solutions, in direct comparison, tend to favor mythic surges a bit more often than the ones featured herein.

Now, just to make that clear – I don’t begrudge this pdf the inclusion of these feats, not in the slightest; however, considering the redundancy aspect and LG’s MASSIVE array of books that support mythic gameplay, I’d remain with LG’s solutions here, if only to maintain overall consistency. Not a fault of the pdf, mind you…but ultimately, I wished the book provided more subpaths instead.

Editing and formatting on a formal and rules-language level are very good. Layout adheres to Rogue Genius Games’ two-column full-color standard and the pdf comes with solid color stock art and is fully bookmarked for your convenience.

Now, I’ve said as much above – you can very much see the increase in design skills Alexander Augunas has acquired since penning this book. On the plus side, several of the subpaths herein are absolutely amazing and flavorful and should be considered to be fun. On the downside, we have, at times, needless escalation of numbers (which is already an issue in mythic gameplay) and a couple of high-tier options that are unlocked earlier; while this doesn’t HAVE to yield issues, it should receive some contemplation on part of the GM. Not all options herein are for every game and escalations in mythic power availability are a big no-go as far as I’m concerned, being one of the very few things mythic characters need to carefully manage.

That being said, there are some definite gems herein, which may warrant getting this book – as such, I consider this to be pretty much a mixed bag and thus rate it 3 stars.