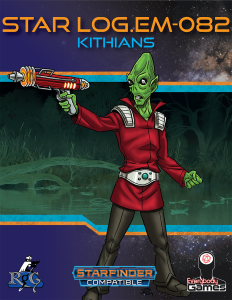 This Star Log.EM-installment clocks in at 8 pages, with 1 page front cover, 1 page editorial, 1 page introduction/advertisement, 2 pages of SRD, leaving us with 4 pages of content, so let’s take a look!

So, the first thing you need to know is that the playable species herein uses the highly modular (and awesome) reforged-playable-species engine employed first in the Star Log.Deluxe-series: If you’re not familiar with it yet, I suggest searching for my reviews of these pdfs, because I assume familiarity with the engine in this review. That being said, if you don’t want to go through the hassle, think of it as more akin to how PF2 handles ancestries. The pdf can also be used with standard species rules – guidelines are included.

Kithians get an ability boost to Dexterity, Intelligence, Wisdom or Charisma, with a second boost available for an ability flaw to Strength or Constitution. The species only gets 2 Hit Points, but gains the amphibian and aquatic subtypes: They can survive on water and land, can breathe water and get a base speed of 30 ft., swim speed 30 ft., and also a climb speed of 10 ft. They also have reflexive camouflage, which they can activate as a reaction when targeted, behaving like an operative’s cloaking field, but attacking or using a concentration-requiring ability ends it, and it can be used again after a 10 minute rest to regain Stamina Points.

So that would be the basics – but do they feel like an actual species? Well, first of all, while looking rather normal, they actually lack endo/exoskeleton and instead move via the inflation and deflation of air bladders; they are only fertile once in their life, and can procreate with pretty much any species via skin-contact – and yes, this can happen sans the donor knowing, though this is frowned upon in kithian culture. Finally, the final stage of their life cycle sees them discorporate into insects, becoming a hive mind; when only a few are left, they are usually consumed consensually by friends and family. They also tend to gravitate to being pacifists. Now how is that for a cool and thought-provoking culture when contrasted by the relatively mundane look?

Anyhow, we also learn about their culture, cuisine, home world, etc., and the pdf includes a table for different age categories, as well as the “Playing a kithian…” and “others think…”-sections as roleplaying pointers. But let us return to the crunchy side of things: There are 4 kithian heritages to choose from: Anurarian kithians gain extraordinary fly speed 20 ft. than must end on solid surface, and are a bit frog-like; holthurian kithians gain Filtration as a bonus species trait: This trait lets you be treated as though having a poor meal if you spend 2 hours in a body of water capable of supporting life. Mulluscain (not sure if that should be Mulluscian…I’d think so…) kithians gain the Compress Form trait. This trait lets you deflate or inflate as a standard action: While deflated, you become Small and off-target, but gain the compression universal creature rule—cool! Salamile kithians are somewhat more salamander-like and get Shed Skin: You can, as part of the action to attempt such a check, shed a portion of your skin to gain an untyped +4 bonus to Acrobatics to escape from grapples, pins and restraints. First of all, that bonus should be typed. Secondly, shouldn’t that have some sort of limit? Otherwise, why bother making this an active decision and not simply something that happens automatically? Pretty sure something went slightly wrong here.

At 1st level, kithians get to choose 2 species traits, with 5th level and every 4 thereafter providing another one. I’ve already covered a few of them in the coverage of the heritages above. The remainder would be: Bog Runner, which makes you operate normally in bogs; Combat Training nets Improved Unarmed Strike or Improved Combat Maneuver, and may be taken multiple times. Expand Form is cool: standard action to increase to Large size (or back) and you are off-target, but space and reach increase by 10 ft. Intimidating Inflation provides synergy here, netting you a +2 racial bonus to Intimidate checks made to demoralize, which upgrades to +3 when Large. Kithian Expertise nets you Skill Focus, and later allows you to increase the bonus granted later…or instead gain an enhancement bonus to the skill.

Editing and formatting are very good on a formal and rules-language level – for the most part. Layout adheres to the series’ two-column full-color standard, and the artwork provided by Jacob Blackmon, while solid…kinda left me unimpressed this time around. The kithian race is so cool, the artwork feels a bit anticlimactic in comparison. The pdf has no bookmarks, but needs none at this length.

Joshua Hennington and Alexander Augunas deliver a rather interesting species here: A timid culture that is strange and still…good? In many ways, the race feels like one that would make for a great old-school Star Trek episode, you know, when Star Trek was optimistic and wholesome and was about encountering interesting, strange cultures, and not about action scenes and grimdark, dystopian misery? But I digress.

I really like the kithians, more than I should. They are a fragile race that requires some player skill, and make for excellent envoys, for example. At the same time, I do feel like they’re geared a bit strongly towards that role, but the uneven race/class-combo is a paradigm that also haunts the core SFRPG game, so it wouldn’t be fair to bash the pdf for it.

Mechanically, there isn’t much to complain about here, apart from Shed Skin, and a distinct wish on my part that the different heritages had some more exclusive traits between them. On the plus side, using the Advanced Occult Guide can add some nice tactical depth when it comes to the relatively spontaneous size-enlarging tricks.

So yeah—as a whole, this is certainly worth the asking price. My final verdict will be 4.5 stars, rounded down.

You can get this neat species here on OBS!

Missed the Reforged Races-pdfs? You can find the first one here on OBS!

The Vesk Empire species can be found here, the Blood Space species here!

If you enjoy Everybody Games’ designs, consider supporting their upcoming Eversaga RPG! I’ve seen quite a lot of it so far, and I’ve seen makes me really want the finished game! You can support the game here on patreon.

If you consider my reviews to be useful, please consider leaving a donation via paypal, or joining my patreon here. Thank you.