Forgotten Sepulchre of the Father (5e)

Forgotten Sepulchre of the Father (5e) 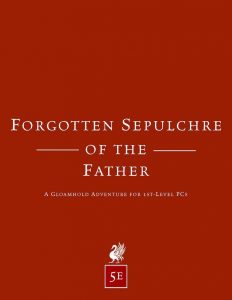 This adventure clocks in at 16 pages, 1 page front cover, 2 pages of advertisement, 1 page editorial/ToC, 1 page SRD, 1 page back cover, leaving us with 10 pages of content, so let’s take a look!

The module is a straightforward tomb-exploration for 1st-level characters and comes with 2 different adventure hooks as well as information for parties that do their legwork up front (as they should). The module, structurally, is intended as a trial/teaching adventure, and this is reflected in the structure – we have a pretty linear complex. The module comes with 6 general pieces of dressing, and 6 things to find when the party looks around; for the GM’s convenience, we get a one-page summary of monsters by CR and by location (which includes a cosmetic-effects-only list of effects for deformed creatures and the stats for a challenge 3 enemy. The respective areas include readaloud text. The page containing the map of the tomb (no player-friendly, unlabeled version included) also provides the information regarding lighting, etc., and e.g. the inscriptions for a given sarcophagus. Nice and handy. Convenient. This also extends to the respective rooms, which sport bolded headers for things that can be interacted with, as well as e.g. bullet-pointed contents for shelves

On the downside, the section on walls notes “Climb checks” – that should be Strength (Athletics) for 5e. A trap is missing its average damage value; formatting isn’t always perfect (lower case “I” in “Investigation” skill), and we have instances where e.g. the tool-reference to opening a door is missing. The implementation of 5e’s rules is not exactly smooth.

Okay, only GMs around? Great! So, the module begins with back-breaking labor, as the party needs to clear the entry to the complex in some serious work. This may just be a note, but it establishes a gritty tone from the get-go, one supplemented when deformed cultists (using the default stats plus aforementioned cosmetic modifications) attack. The reason for the party t be here actually matters, mind you: While the church is abandoned and ruined, it’s still a crypt the party is entering: Retrieving relics and bones of those interred from obscurity may be noble; desecration, on the other hand, may well result in the dead rising.

The simple dungeon is per se pretty high in interactivity, and has one nice thing going for it: You see, aforementioned new creature is a tomb guardian construct – and it’s a rather tough (if somewhat boring – it can only attack, no unique abilities) statue. That being said, clever parties can display a holy symbol of the deity to which the sepulcher is sanctified, saying a prayer, etc. can prevent combat here. Indeed, the most interesting aspect of this dungeon is that it can be solved with only minimal combat (a zombie, a ghast, and, optionally, 4 skeletons), which makes a 5d8 glyph of blasting an oddly-deadly outlier in an otherwise very tame adventure. This glyph is also my main issue here: It never states its trigger properly. I’m also not sure where it’s supposed to be on the map; I’d assume door, but there is no door on the map. The glyph could have easily been telegraphed in a subtle manner, with damage on the walls. As written, it is a bit opaque and consequently feels like one of those annoying “gotcha/cross-invisible-line-take-damage” instances.

To end on a more positive note: I did enjoy that the module did provide notes on how much a skeleton weighs. (As the party will likely be carrying quite a few of these home…)

Editing and formatting are okay on a rules language level; I noticed a couple of imprecise instances and deviations from 5e’s defaults. On a formal level, I don’t have much to complain about – a “Hit:” in the new critter’s statblock isn’t properly set in italics. Layout adheres to Raging Swan Press’ two-column b/w-standard, and the pdf comes with some nice b/w-artworks, though fans of Raging Swan Press will be familiar with them. The module comes with two awesome b/w-maps, but alas, no player-friendly versions are included in the files. The adventure comes fully bookmarked for your convenience, and in two versions – one for screen-use and one intended to be printed out. Nice!

I really wish I liked Creighton Broadhurst’s training adventure more than I do. I’m a fan of well-executed starting adventures that teach the basics of tomb exploration, and this one has a focus on being able to bypass many challenges and components without resorting to violence, which is a GREAT design-paradigm I very much adore. Problem-solution writ large = win, as far as I’m concerned. However, I have an issue here:

For an introductory adventure, Raging Swan Press’ Shunned Valley of the Three Tombs is more versatile and interesting; and Retribution still remains one of the best campaign starter adventures I know…and in contrast with these two (admittedly longer) adventures, this one just falls flat.

Add to that the uncharacteristic formal hiccups, and I can’t go higher than 2.5, rounded up to 3 stars for this one. It’s a very vanilla little tomb exploration; design-wise, it does a lot right, but it also remains somewhat unremarkable when compared to the other adventures Creighton Broadhurst has penned for level 1. I’d strongly suggest getting Retribution (if you’re willing to convert it from PFRPG) or Shunned Valley (which is available for 5e) instead.

You can get this mini-module here on OBS.

You can get aforementioned Shunned Valley of the Three Tombs here on OBS!

You get the phenomenal Retribution here on OBS!

(Seriously, get Retribution if you don’t already have it!)

If you consider this review to be helpful, please consider leaving a donation via paypal, or joining my patreon here. Thank you.