The People of the Pit (DCC)

The People of the Pit (DCC) 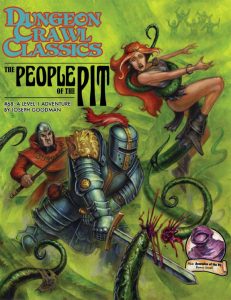 This DCC-adventure clocks in at 36 (!!) pages, 1 page front cover, 1 page editorial, 1 page advertisement, 1 page back cover, leaving us with 32 pages, which are, as always for Goodman games, chock-full with content, so let’s take a look!

This review was requested by a supporter of my patreon.

This is an adventure for DCC – a classic, in fact. Most DCC-groups will have played this already. So why bother reviewing it? Well, for one, I’ve been gifted a couple of DCC adventures by one of my readers, to be reviewed at my convenience. Well, and I’m somewhat OCD. So there you go – consider this an indirectly sponsored review of this adventure. Secondly, and as important as far as I’m concerned: This module is imho interesting beyond the confines of its rules-system. It should be noted that this adventure contains a TON of truly evocative read-aloud text that really helps create a tight and intriguing

This adventure is intended for level 1 characters; it is pretty dangerous, but how dangerous it is ultimately depends on how capable your PLAYERS are. Sure, bad rolls of the dice can kill you, but as a whole, the module focuses much more on the skill of PLAYERS as opposed to characters. Your wits are more important than how potent your build is. I strongly suggest that you play this with one or more PCs that can cast spells to make use of the two new spells within. I will mention these below.

You see, there is a town. Some degenerate chaos cultists crawl out of a pit, tentacles, yadda-yadda, evil dudes abduct women. Go save them.

At this point, you probably ask yourself why I even bothered, right? Well, to explain that, we have to go into SPOILER-territory. Potential players should jump ahead to the conclusion.

All right, only judges around? We join the PCs as they are greeted by scratch-marks speaking of horrid sacrifices in a blasted landscape, and indeed, venturing down the mist-shrouded steps into the vast, eponymous pit, will establish the theme perfectly. You see, the cultists, handily, denote their hierarchies by the color of their robes…and seeing them for the first time will be the time when the PCs may well turn tail and run. Their faces are blank, rubbery masses, reminiscent of tentacles, and vestigial tentacles grow from their abdomens, twitching. There is nothing human about these things, and indeed, the inhuman nature of these beings is emphasized in perfect environmental storytelling that makes sense – they can, for example, navigate crawlspace-sized environments with ease. And yes, such claustrophobic places are included. Worse, these vestigial tentacles are so-called octo-masses that burst forth from cultists slain.

Once the horror of these beings has been experienced, clever PCs may make use of a couple of observations: Controlling when to kill targets can help, and indeed, there is another aspect that makes this stand out: The Chaos-Beast quasi-deity of the monstrous cultists. You see, they have beast-men, so-called Toans. Sure.

But the true horror and one of the coolest aspects of this module? The Chaos-Beast is basically a buried, kaiju-plus-sized mass of maws and tentacles, an idiot-god of sorts – and the cultists can, in groups, call forth and attempt to control Chaos-Beast tentacles! And yes, you can learn the spells! Shadowy tentacles and control of present tentacles! This means that a spellcaster can potentially turn the monstrous thing against its own creatures – and once the module is done, there is a good reason why those spells don’t work! The sooner the PCs realize this and the propensity for minimum-numbers of cultists required to call these tentacles, the higher their survival chances will be!

The partially living dungeon, the caverns and complexes suffused with these tentacles, is not simply window dressing – there are “tentacle elevators”, wherein the PCs climb down/ride tentacles to levels below! The strangeness of the cultists implies a unique life-cycle that the PCs will get to find out as they go. Much like the robe-colors, these experiences are not subtle, but incredibly remarkable – and indeed, they are enhanced by the bonus level that has been added in the current printing of the adventure. The three-page bonus dungeon adds another lifecycle and arm to the cult – the assassins of the cult, octo-masses that have outgrown their hosts, and that can duplicate the faces of adversaries as really creepy faceless men. Moreover, the bonus level is better integrated into the module than e.g. the one featured in the excellent “Doom of Savage King” – the entry is actually hidden on the first level, and considering how the assassins work, it makes sense to use them to potentially lure PCs that would miss the place there. An easy means would be to introduce them as a kind of counter-measure.

Beyond that, the module is actually not just a brainless hack and slash with some mechanic specialties and unique hazards/monsters. Far from it! There, for example, are meditative labyrinth paths – you know, the ones on the floor? These act as delightfully MAGIC teleporters – and yes, the PLAYERS have to solve these. There are handouts for the paths (and a convenient solution for the judge) – and indeed, this is a fantastic example of how sword & sorcery, dark fantasy and lovecraftian aesthetics can form a cohesive whole. You see, the cult is not simply alien in its physiology and life cycle. Oh no! From strange pods to powders and liquids with odd effects, curious PCs can find out quite a lot about how these…things…operate. Whether this is technology, magic, a blend of both…it all depends on how you interpret it. It shows, and does not necessarily explain. It is an example of how you can efficiently convey lore, piece by piece, and it is so successful at this, it may well make your players want to explore the entirety of the module, just due to how incredibly well indirect storytelling is handled within.

There is not a single room or encounter within this 4-level (5 with the bonus level!) dungeon that I considered to be boring; there is not a single trap or hazard that is not deserved; this makes sense in its twisted way – and this commitment to a kind of plausibility only serves to enhance the atmosphere of this place. Oh, and the finale? It is classic Conan, as the PCs arrive just as folks are being sacrificed to the massive Chaos Beast – and indeed, the main honcho may be eaten by their deity! To one-up this, the module actually also presents a super-impressive one-page handout that depicts the scene. If your player’s jaws don’t hit the table, if you hear no audible *gulp* when showing them this…then you have the most jaded players ever. Anyways, there was one point of criticism I had with the original module – one that has been rectified by the inclusion of the bonus level. You see, the PCs, originally, never got to actually walk directly on the chaos beast. Well, now they do, and the rules presented allow the judge to extrapolate hazard-like dangers for PCs unlucky enough to land on this titanic entity.

Editing and formatting are top-notch on a formal and rules-language level – I noticed no issues. Layout adheres to a two-column b/w-standard with plenty of fantastic, b/w-artworks. Particularly the handouts add a second, super-impressive level to this pdf. The cartography is absolutely gorgeous, but we get no player-friendly version, which is a bit unfortunate for VTT play etc. The pdf comes fully bookmarked for your convenience.

Joseph Goodman’s “The People of the Pit” is a frickin’ masterpiece. (And yes, I got the obvious Appendix N reference of the title.) At this point, I am utterly bored by most modules that feature an evil cult, particularly if it’s yet another mythos-deity of the week related thing they worship. This module, though? Damn, it is absolutely glorious and a perfect rebuttal to the internal conviction that the whole cult + tentacles angle needs to be boring. In fact, this module pretty shows everyone how it’s done. The dungeon is hard, brutal even, but fair. The adversaries are brilliant, creepy and unique. The dungeon has a ton of unique features that PCs can partake in. The focus on player-skill over character-skill is amazing. The prose is crisp and concise. The production values are great. Oh, and all my nitpicks about the potential of this set-up? Daniel J. Bishop’s bonus level stripped me of them. The consistence of the quality here is impressive.

In short: This is my benchmark of what any module with an evil cult should be able to offer, theme-wise. Fair warning: This can and will spoil hackneyed, lovelessly cobbled-together run-of-the-mill creepy cult modules forever for you. It’s that good. Ever since I first read this, I found myself comparing adventures with only remotely related themes to this one. If you’re playing DCC, you probably already have this. If not, then get this now!

Even if you have no idea of what DCC is, though, even if you have no plans to play using the system, even in such a case, this is worth the fair asking price twice over. Whether for idea mining of straight conversion, this module is so damn good it frankly should be canonized as an adventure that people should have played; as a rite of passage, if you will. This module will live on to become a true classic, mark my words. I mean, even jaded ole’ me gets this hyped about it. That ought to say everything.

My final verdict will be an unsurprising 5 stars + seal of approval. If you even remotely are interested in the themes, get this asap!!

You can get this amazing adventure here on OBS!