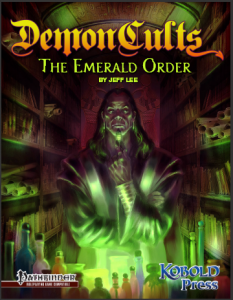 This installment of Kobold Press’ Demon Cults-series clocks in at 14 pages, 1 page front cover, 1 page editorial/ToC, 1 page advertisement, 2/3 of a page SRD, leaving us with 10 1/3 pages of content, so let’s take a look!

“A Demon Cult? Urgh.” If that was your response, then you’re pretty much like me and over-saturated by bland “doing it for evil’s sake”-idiot-plot-device adversaries. Thankfully, Kobold Press seems to have taken up the mantle to make secret societies and organizations no longer suck and actually have a distinct identity – at least that’s the goal. So can the Emerald Order fulfill it?

Well, for once, the Emerald Order is not actually a Demon Cult – worshiping Thoth-Hermes and having deciphered the secrets within the Emerald Tablets, the members have managed to attain increased magical prowess – alas, as per the truism, power corrupts and the Emerald Order, in the time-honored tradition of secret societies, is exerting significant influence of the bodies politic in the realms wherein they have established themselves. Guided in that endeavor are they by their fully statted CR 15 sample character, the middle-aged master of the order, who sports no less than all ten levels of the new PrC, but more on that soon. The statblock is nice to see, though AC the non-flat-footed AC seems to be off by 1 point – now the statblock itself remains functional for the DM and hence, I won’t complain too much about such minor hiccups.

The PrC covers 10 levels and is called Disciple of Emerald Esoterica. It requires 2nd level spellcasting and 3 ranks in some skills for relative early access, making the fluffy requirement of acknowledgment by the order to most important component. Formally, the PrC nets d6, 6+Int skills, 1/2 BAB-progression, 1/2 will-save progression and full spellcasting progression. The abilities themselves, sporting colorful names like “Key of Wisdom” and the like, deserve special mention -aforementioned first ability allows for the stacking with cleric levels for ability purposes or skill bonuses to wis-based skills that increase based on ranks akin to lesser skill focus-style benefits. Similar benefits are provided for arcane casters and oracles at higher levels (the latter working out surprisingly well re balancing builds) and beyond that, each level nets some sort of limited spell-like abilities than scale in their daily uses per day. Resistances can also be found herein among the abilities granted and disciples may, at higher levels, act in surprise rounds and later even learn e.g. final revelations, bloodline abilities et al. or, yes, grand discoveries. A basic glance will show you that this renders them accessible much sooner, which means that yes, imho you should keep this PrC out of player-hands…UNLESS you actually want them to enjoy those apex-level tricks for longer. It should also be noted that the order learns to chip away emeralds from the artifact-level tablets (which get a full write-up) to make a DR-granting ioun stone and that over all, its rules-language is pretty precise. Several SP-granting abilities sport a duality-theme, which is nice, but doesn’t really mitigate the fact that these aren’t as cool as e.g. the forewarned ability versus surprise rounds mentioned before – I would have loved some more esoteric abilities here – ironic, considering the focus of the order. And yes, the PrC, generally, can be considered rather solid.

Furthermore, disciples may create the Smaragdine golems, unerring trackers and magic absorbing sentinels – that, much like aforementioned leader, receive a glorious, high-standard visual representation in a beautiful piece of artwork. Where the pdf truly fills its role, though, would imho be in its numerous adventure suggestions involving the order, all grouped handily by APL – these range from kingdom-destabilization to polymorphing afflictions and should drive home rather well the diverse methods employed by this cabal. I loved this section and each, but one of the hooks has its first sentence bolded, thus allowing you to take in the premise of the hook at a glance! Fans of Midgard should also be aware that there is indeed a box helping you use the order within the context of said world.

Editing and formatting are top-notch, I didn’t notice any significant glitches apart from one unimportant bolding missing among the hooks. Layout adheres to a modification of Kobold Press’ beautiful 2-column full-color standard, with the borders evoking the theme of the gorgeous front cover. The original pieces of artwork are drop-dead gorgeous. The pdf comes fully bookmarked for your convenience.

Jeff Lee’s Emerald Order is a surprising first choice for a Demon Cult in that is feels more like an esoteric order as popularized by the pulp novels – the pdf manages to quote he themes of implied supremacy, of strange orders offering powers beyond the ken of the uninitiated and thus creates an organization that can be considered interesting indeed. Now while I’d be rather careful about allowing PCs to take the PrC herein, the added edge my provide interesting mechanics and while not suitable for every campaign, I can see an order PC working in some campaigns – rather well, actually!

Now this installment may not be perfect, but it is a more interesting book than I imagined – while I’d expect fame/reputation mechanics for cults and organizations intended for player use, as a mostly NPC-focused order that could potentially double as a player-expansion, I will not hold this omission against the pdf. I would have liked somewhat more detailed information on suggested resources at the order’s command, on how they handle threats and the policies of the cabal, but that is my personal preference – there are a lot of ways to run such conspiracies and while a general inkling of the like is provided, the non-alignment-specific nature of the order (though they are strongly geared towards evil, the PrC is not…knowledge itself is neutral…) means that here, a bunch of cool choices and options at their behest could have been highlighted – don’t get me wrong – this stuff is hinted at and generally covered, yes – I just wished the pdf was slightly more concrete and the same goes for the means of advancement within the order’s hierarchy This is me nagging, though. The Emerald Order is a cool organization, one that oozes the spirit of pulp and classic weird fiction and for the low asking price, you receive a nice organization to throw into your games.

When all is said and done, this can be considered a good first installment of the series and one that makes me look forward to the other installments, which I will cover as well…and rather soon! My final verdict for this one will clock in at 4.5 stars, rounded down to 4 for the purpose of this platform since it over all feels to me like it could have gotten slightly more out of the order’s awesome visuals and style.

You can get this cool organization here on OBS and here on d20pfsrd.com’s shop!