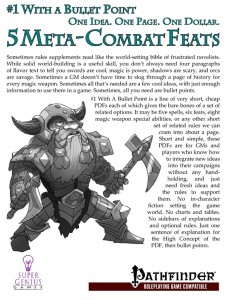 All right, you know the deal – 4 pages, 1 page front cover, 1 page SRD, 2 pages of content, so let’s take a look at these meta-.combat feats, shall we?

So what are these? Meta-Combat feats require a full-attack action and have individual additional restrictions and each comes with an individual cool-down that does not stack with other Meta-Combat-feats. Got that? All right, so what do they do?

-Bind and Bash (Metacombat): Bind foe’s weapon, wand etc. Make a CMB vs. CMD-check that provokes AoOs. If you succeed, you may make an off-hand attack and neither weapon can be used. Bound weapons/items may be dropped or ended via CMB vs. CMD or by stepping away. On subsequent rounds in a bind, you may attack with an off-hand attack as a standard action. After the bind breaks, cooldown is 1d4 rounds. Okay take on the swashbuckling maneuver, but rather weak for the investment of a feat.

-Duck out of Sight (Metacombat): Stealth -10 to prevent the target from having line of sight with you until you next attack, cooldown 2d4 rounds. This one will result in bad scenes – ranged fighters, wizards etc. can potentially abuse the HELL out of this feat via guerilla tactics.

-Hammer Down (Metacombat): As a full attack, make one attack at +5 that provokes an AoO. The attack deals half damage, cooldown 1d3. Okay feat.

-Over the Top (Metacombat): As a full-round action, move from a space adjacent to a foe to any adjacent location on the far side of the foe and make an attack halfway through your movement. If your attack exceeds the target’s CMD, you knock the target prone. Does not provoke AoOs from the target, but from other foes, cooldown 1d4+1. Not sold on this overtly complicated variety of trip.

-Running Attack (Metacombat): Move 2x your movement rate and make two attacks at any point as you do, both of which incur a penalty of -2. You do not gain the benefits of your mobility feat versus AoOs you incur thus, cooldown 1d3 rounds.

Editing and formatting are okay – I noticed a line of missing blank spaces, for example. Layout adheres to a portrait three-column standard of which I’m not a big fan – it makes the text look more cluttered and harder to read than SGG’s old landscape 3-column standard (even though this is now RGG – I’m aware of the new company, just wanted to give you the reference…). The pdf has no bookmarks, but needs none at this length.

Oh boy. I like the basic premise of metacombat feats and when they were first introduced (in the Horrifically Overpowered versions in the respective Genius Guides) I was one of the people who asked for more of them. These, though, just don’t do it for me – they are overly specific and complex for what they do and yes, while they are not necessarily broken, they cultivate one-trick-pony-style fighting. Over all, the rules herein feel surprisingly clunky and VERY specific. One of the feats is utterly broken in my opinion and even the swashbuckling binding-feat just isn’t that compelling. Owen K.C. Stephens did not deliver bad feats here, but awfully specific ones that don’t necessarily warrant the feat-investment or provide a rewarding payout. The concept of metacombat-feats is great, but the examples here universally failed to convince either me or any of my players to take them. Hence, my final verdict will clock in at 2.5 stars, rounded up to 3 due to the low price.

You can get these here on OBS.