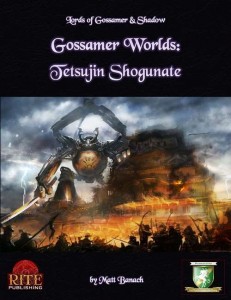 This installment of Rite Publishing’s extremely affordable tour through the infinite worlds of the Grand Stair is 10 pages long, 1 page front cover, 1 page editorial, leaving us with 8 pages of content, so let’s take a look!

The world of the Tetsujin Shogunate has been hit by a catastrophe – caught in-between the insterstellar warfare of the alien races oni and kappa, much of the world has become uninhabitable when the aliens crash-landed there. That being said, there also were positive aspects to all of that (or at least: supremely cool ones!): The kinda-slightly-benevolent Kappa came down in Japan and were coerced/swayed to help stem the tide of the monstrous oni that kept mutating and destroying the remnants of human civilization where the remnants of their ship didn’t finish the job.

The result of that uneasy cooperation was the advent of Tetsujin – gigantic war-machines, piloted by humans and used to stem the tide of monstrous oni. On earth, which is now mostly a domain of nightmarish creatures, the last bastions of humanity thus wage war against the threat of the demonic oni and oni-blood tainted creatures, all while the kappa represent a dying breed on our planet and ninja seek to steal alien technology for their own inscrutable ends.

A sample Tetsujin is btw. provided (and yes, generally, it MIGHT be possible to bring these to other realms…though how is for you and your player’s creativity to decide..), as is a neat array of massive adventure options.

Editing and formatting are top-notch, I didn’t notice any glitches. Layout adheres to RiP’s two-column full-color standard with superb original artworks as we’ve come to expect from the series. The pdf comes with rudimentary bookmarks, in spite of its brevity – nice. Author Matt Banach weaves an interesting world here, somewhere between Cthulhutech, classic mecha-action and Japanese mythology for a thoroughly compelling world with enough potential to offer fodder for a whole campaign of LoGaS, should you so desire.

All in all, an awesome addition to the overall series and well worth 5 stars + seal of approval.

You can get this cool world for a very low price here on OBS and here on d20pfsrd.com’s shop!