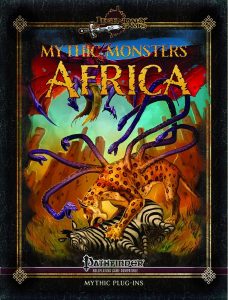 All right, as always in the series, we begin with supplemental material – this time around, we get a total of 7 traps, ranging from CR 3 to 15 and using classics from the Indiana Jones movies: Broken lights, valuable idol, snake pit…you get the theme there. Notable: They all come with means to bypass them beyond rolling Disable Device, which is a huge plus, design-aesthetics-wise, as far as I’m concerned. Beyond these traps, we also are introduced to a total of 5 new magic items and a new artifact.

These items include a compass to keep one’s bearing, an enchanted machete that allows for the relatively easy traversing of natural difficult terrain (via actions, even really nasty terrain can be taken care of), a jawbone shield that helps versus being grabbed via bites and may even bite in retaliation. Primeval brooches are pretty straight numerical enhancers and verminous beacons can keep the biting critters at bay. The artifact, the atlas esoterica contains delightfully obscure information – atlas obscura, anyone?

All right, as always, we should move on from these solid supplemental materials to the critters, and this time around, we begin with the CR 5/MR 2 amphiptere, who receives blood lust and may employ mythic power to temporarily gain flight via uses of mythic power…and impaling creatures will be more lethal as well for the victims of these predators. At CR 1/MR 1, the much loathed pugwampi can create traps sans gold etc. and the build actually features some cool sample traps…oh, and rolling 1s in their aura actually becomes pretty painful…and your players thought they’d hate the regular pugwampi…

On the diametrical opposite end of the power-spectrum, at a mighty CR 20/MR 8, the grootslang (literally: Greatsnake, just fyi!), the strange amalgam of elephant and snake, can sense the presence of gems and heal itself via the devouring of gems. They gain a grounding stomp (that can also AoE smash foes to the ground), Awesome Blow tail attacks via mythic power expenditure and control over both elephants and snakes and immunity versus polymorphs…all in all, a deadly foe.

The mythic jackalwere (CR 3/MR 1) can employ its mythic power to duplicate hallucinatory terrain with added debuffs – decent one. At the same CR/MR, juvenile seps can spit acidic blood and use mythic power to extend its reach, which is pretty cool. The adult version of this creature, btw., clocks in at CR 13/MR 5 and sports an upgrade of these abilities as well as a crushing bite. The Lukwata, at the same CR/MR, receives blood rage, a loathing of crocodiles and they gain better DR. Their magic digestion is also improved, getting interaction with extradimensional spaces etc. right and the antimagic-theme is also further underscored…kudos there!

The classic Kamadan clocks in at CR 5/MR 2 is all about predator-stlye efficiency and as such, they are brutal…mythic power for six snake attacks…ouch…and cool: We actually get the dusk and polar variants as well! Two thumbs up for making this one makes sense! The CR 18/MR 7 kongamato can execute devastating dive-bombing assaults and these fearsome beings may lace their breath with shattering harmonics…awesome!

The living mirage clocks in at CR 11/MR 4 and has a cool regeneration ability that interacts with the wind vulnerability and it can actually use mythic power to cancel wind,,, and as a whole emphasis its weird and unique nature even more than the already rather cool base creature. At the same MR/CR, the mobogo can feign its death and receives poisonous skin as well as a hypnotic gaze: Using mythic power to shed skin and regenerate also makes for a great boss ability.

Mythic popobalas, at CR 18/MR 7 add Charisma damage to rends, may use mythic power to enhance their signature fever and these beings can AoE-Intimidate foes, copy sounds and heals when in the vicinity of those suffering from several negative conditions…oh, and they are particularly adept at turning friends against foes….cool!

The new critter herein would be the emela-ntouka, at CR 8/MR 3, and this new critter is amazing, vaguely serpentine or rhino-like, their horns can provide deadly impaling attacks and they can actually lift prey, making for a compelling critter of the “efficient, believable quasi-natural predator” type, ending the pdf on a high note.

Conclusion:
Editing and formatting are very good, I noticed no serious glitches. Layout adheres to Legendary Games’ 2-column full-color standard and the pdf sports a couple of amazing full-color artworks. The pdf comes fully bookmarked for your convenience.

Loren Sieg, Mike Welham and Jason Nelson deliver one of the installments in the series that perfectly shows why I love this series. The upgrades for the creatures take the respective roles of the creatures perfectly into account; we have an increased emphasis on mythological abilities and an emphasis of unique and powerful abilities that help the respective beings, making them universally cooler. In short: This is a great supplement and with its amazing critters, makes for a must-ow installment of the series. My final verdict will clock in at 5 stars + seal of approval.